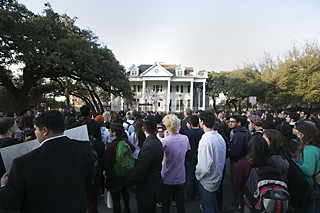 Protesters gather in front of the Fiji house on Feb. 12 (Photo by Jana Birchum)

The Phi Gamma Delta (aka "Fiji") fraternity brought an onslaught of unwanted attention to the University of Texas on Feb. 7, when they held a theme party with attendees in ponchos, sombreros, construction outfits, and border patrol costumes. The party's decorations included signs for tequila, a bar painted with a Mexican flag, and other trappings of Latino stereotypes. While Texas Fiji President Andrew Campbell claimed after the fact that the party was "intended to have a Western or Old West theme," partygoers were apparently under the impression the theme was "border patrol," and plenty of observers were not amused.

However, many UT students, while disappointed, were not surprised. Christian Umbria Smith of the UT chapter of the League of United Latin American Citizens (Longhorn LULAC) said his initial reaction was, "Oh, not this again." He went on, "We're not so much surprised by any of this. We're more just in a mindset that we need to address it as soon as possible. We're more determined than anything." Similarly, UT Lati­no Community Affairs' Latino Lead­er­ship Summit Co-Chair Edwin Hurtado noted, "Like everyone's saying, you know, it's happening again. I'm disappointed that the university administration hasn't done anything to stop it from happening again."

Longhorn LULAC released a statement, reading in part: "The University needs to enforce stricter penalties against these groups because enough is not happening if they are not afraid of the repercussions of hosting another party with such an offensive theme. This nonsense must end. Now." Latino Community Affairs issued a letter of concern, supported by dozens of organizations, which made a similar point. Students also organized a United Against Racism March in protest. On Feb. 12, participants traveled from UT's Cesar Chavez statue to the Fiji house in West Campus, carrying signs with messages such as "We're a culture, not a costume."

UT is conducting two separate but related investigations, one by the Division of Student Affairs and one by the Campus Climate Response Team (CCRT). Erica Saenz, associate vice president of the Division of Diversity & Community Engage­ment (which jointly oversees CCRT), admitted, "As you know, this is not a new thing at the university, unfortunately, and not a new thing nationally either – this issue with theme parties. But the Division of Student Affairs does provide resources and education and support for students when they're planning a theme party." Further, she noted, "It's a delicate situation in that it isn't sort of a legal issue that we're talking about, it's a bias incident. So we're in that gray area of what is offensive to someone and what isn't offensive to someone else."

While Student Affairs has the power to discipline Fiji, CCRT simply "collects data about bias on campus through an online report form, by phone, or in person and works to support the reporting individuals and to connect campus members to university resources." In other words, CCRT cannot punish the organization, but can only respond to the incident with education and outreach.

Marilyn Russell, coordinator of Sorority and Fraternity Life in the Office of the Dean of Students, said the university has institutional rules for these situations. The dean of students, after a hearing, has the authority to sanction the organization in a variety of ways – such as sending a written warning, placing the organization on probation or suspension, canceling the organization's registration, or simply requiring educational seminars and community service.

At this point, "Outcomes are hard to talk about because it would vary depending on what is found through any kind of process," Russell said. "It's just too early right now to speculate." The administration refuses to give any timeline for the investigation: "The biggest thing with our timeline is really just to move as quickly as possible. I mean, that truly is the timeline," Russell said. "In the big picture, we'll be partnering with people on campus to move forward with this conversation."

Having met with the chapter leadership of Fiji, Russell told the Chronicle, "It's going very well. I think the organization is actively engaged in this process and is working proactively, from my perspective, to understand the situation from their perspective and others' as well."

In his statement, Campbell wrote, "We have learned an important lesson about planning and conducting our social events and other activities as responsible members of the University and Austin communities. We commit to work with the office of Fraternity and Sorority Life to plan programs to educate our members and reinforce the lessons from this unfortunate incident."

Lee Lueder, UT student and president of the Texas Interfraternity Council, issued a statement saying, "The reality is that most members of the fraternities and sororities that throw these types of parties have never had to deal with the issues they lampoon. Thus, they have no right to say what should or should not be offensive to people who have. ... The Interfraternity Council leadership has reached out to leadership from the Multicultural Engagement Center in hopes that they will advise us as we make guidelines on party themes for our member fraternities."

"I have trust in what they intend to do," Smith said. "I do have faith in the school to [hold Fiji accountable] but obviously it's going to be a work of the entire community." He believes that "Apologizing is a necessary part of it but [the Fijis] need to actually have a sanction put on them for what has happened." Otherwise, he worries that nothing will change.

When asked about these concerns, Russell replied, "To be skeptical is premature because nothing has come of this exact case right now." As to whether she considers West Campus and the Greek community to be welcoming environments for all students, Russell declined to comment.

Smith is far from alone in his worries. Hurtado said, "I'm worried that they're just going to get a slap on the wrist and be like, 'Don't do that again.' It's not the first time, and it won't be the last time, I'm sure, if they don't do anything about it." Another UT student, Mukund Rathi, said, "UT's programmatic response is to institute more sensitivity training, and it should be clear by now that that is a failed solution."

"Not the First Time"

• November 1989: A Latino family is attacked by five white Texas Fiji frat brothers; the attackers claim the attack wasn't racially motivated, but instead because they thought the family was homeless.

Phi Gamma Delta (Fiji) designs a shirt depicting a Sambo caricature head on Michael Jordan's body; the frat also posts signs on its lawn reading "No Blacks Allowed," and "We Reserve the Right to Be Complete Assholes – Mgmt."

• November 2013: The Young Conservatives of Texas cancel their "Catch an Illegal Immigrant" event after it's denounced by UT admin.