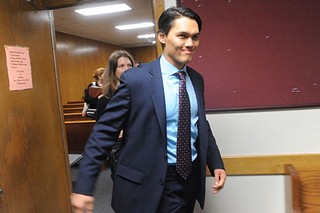 Antonio Buehler leaves the courtroom after being acquitted. (Photo by John Anderson)

After 22 hours of evidence, a juror's dismissal, hallway conversation in close proximity to a witness that nearly led to a mistrial, a reading from Rudyard Kipling by a defense attorney, one woman ejected for taping portions of the testimony, and one witness recalled only to be dismissed without actually answering any questions – it was fitting to see prosecutor Matthew McCabe summarize the week's proceedings to the jury during final arguments as being "literally a three-ring circus." Generally speaking, Class C misdemeanor trials don't require four days of proceedings. This one, featuring cop-watching activist and organizer Antonio Buehler, extended into the unimaginable by its first lunch break.

Like the trial, the incident that brought Buehler to court last Thursday, Oct. 23, played out more madly than a tent-cage tiger act. On Jan. 1, 2012, shortly after 1:30am, Buehler and a friend, Ben Muñoz, stopped into a 7-11 on North Lamar Boule­vard to get gas when he noticed two women – pulled over for failing to employ headlights, leading to an investigation for DUI – being arrested by two police officers (Patrick Oborski and Robert Snider) in a manner Buehler and his friend considered excessively aggressive. Buehler and Muñoz used smartphones to snap photos; Buehler, 34 at the time and blessed with a booming voice, questioned the officers about their efforts. He continued asking about each officer's actions as they carried one of the women to a squad car. After detaining the arrestee, Oborski turned his attention to Buehler; a scuffle ensued. Buehler refused Oborski's directions to put his hands behind his back, was brought down to the ground, and eventually submitted to Oborski after Snider unholstered his Taser.

Buehler was initially charged with harassment of a public official (for allegedly spitting on Oborski, a felony) and resisting arrest (a misdemeanor), but in April 2013 was no-billed on those charges and indicted instead for failure to obey a lawful order, a Class C misdemeanor punishable with no jail time and a maximum $500 fine. He eventually won that case on Wednesday, acquitted after a five-person jury deliberated for nearly six hours, an outcome long in the making.

Two-and-a-half years to wait before trial on a Class C misdemeanor doubles as an eternity for a defendant, especially when the interval's been occupied by the creation of a police accountability organization, the Peaceful Streets Project, that now counts its followers (on social media) in the tens of thousands. After two more arrests and another court decision (see "Buehler Law­suit Victory," Aug. 1), one can't blame Buehler for going full-throttle in his latest legal effort. "This is not about the fine," his attorney Millie Thompson told the jurors during final arguments Thursday. "And you know it."

In that ominous context, the defense saw fit to roll out every conceivable witness, including one, Jermaine Hopkins – a suspended APD officer who claims he is being fired from the force after superiors learned of his being subpoenaed by Thompson – who could only testify to a series of hypotheticals. Attorney Thompson called Muñoz, the two women from the DUI stop, a passerby who filmed the original incident from across Lamar Boulevard, and Buehler himself. They provided smartphone photos, 7-11 surveillance footage, referenced both officers' dashcam videos, and made use of an easel and big white poster board. McCabe, in turn, called three more witnesses: Oborski and Snider, as well as APD Academy Instructor Raul Car­ril­lo, who could also offer only hypotheticals.

Both sides debated over the fine print that defines reasonable suspicion, probable cause, "Terry stops" (brief, on-street police detentions), and constitutional rights. The state argued throughout the four-day trial that police have an inherent right to engage in temporary detainments; that Oborski acted legally by ordering Buehler to put his hands behind his back, because he deemed the order appropriate for the given situation. The chaos that surrounded that isolated incident didn't matter, McCabe argued; it wasn't Buehler's judgment to make.

Thompson suggested instead, via a string of testimonies, that Oborski infringed on Buehler's First and Fourth Amendment rights and that Buehler had done nothing to provoke Oborski illegally. She had Buehler testify to his ignorance of the officer's order, and repeatedly twisted state witnesses around their own sworn testimonies. During cross examination, Carrillo once responded to a hypothetical drafted similarly to the Buehler episode by saying one could charge the officer with assault.

It was nearly all for naught. On Monday, after two days in the courtroom and a weekend spent waiting for final arguments, observers learned that one of the jurors had informed Judge Mitchell Solomon that he feared retribution for any decision, and thus could under no circumstances provide a verdict. Mitchell dismissed him, and McCabe pushed for an immediate mistrial. Fear is the same as indecision, he argued. It's basically a hung jury.

Solomon recessed until Wednesday, took pleadings from both sides, and decided to proceed. The five jurors settled in and McCabe declaimed his final argument. Thompson followed, and the jury recessed for deliberation shortly before noon; at five, the judge suggested either a quick verdict or another day – 30 minutes later, they ruled for the defense.

Despite the outcome, Buehler's work has just begun. He's set to defend two additional misdemeanor charges for other arrests in the coming weeks. (The first was originally scheduled to start today, Oct. 30.) Additionally, in March, a federal trial is scheduled for a civil rights lawsuit he filed against Oborski, Snider, and the APD. Buehler noted last week that winning this week's case isn't essential for a positive outcome in the civil suit, but it should help legitimize his argument moving forward.

Buehler's Case Dismissed
One charge down; more cases to come