Council: Everything That Fits 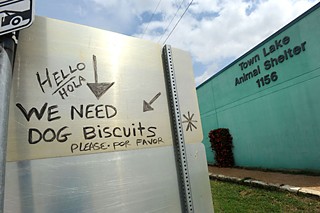 Austin Pets Alive! wants this to be its forever home. (Photo by John Anderson)

Apparently, 121 items of business weren't quite enough for today's (June 12) City Council meeting, so they added one more – a fairly innocuous resolution (sponsored by CMs Mike Martinez, Laura Morrison, and Kathie Tovo) to accept the donation of a former Rainey Street house to eventually become the Rainey Street History Center. Considering the location, let's hope it doesn't prove to be a white elephant.

As a group, the Council members are a fairly feisty bunch this week, adding to an already burgeoning agenda with plenty of member resolutions sure to gather votes (or sparks). Could it be campaign season?

There's Item 57 (Tovo, with Morrison and Martinez), that would direct Austin Energy to move toward "full cost recovery" of line extensions – i.e., make developers pay the full cost of extending utilities to their projects – heavily advocated in the wake of the 2010 Formula One project (where the track replaced a planned residential development). There's Item 58 (Mayor Pro Tem Sheryl Cole, seconded by Mayor Lee Lef­fing­well) to suspend accepting new art for the Butler Trail until an Art Plan Overlay is completed (didn't realize we were drowning in public art). There's Item 60 (Martinez, Morri­son) to initiate a master plan for "Lamar Beach Metro Park" – and to leave current nonprofits in place, which some observers have noted looks suspiciously like an end run to allow Austin Pets Alive! a permanent venue at the old Town Lake Animal Center, despite the flood-prone site and the originally temporary arrangement that put APA! in that spot. (See "Animal Advisory Commission Endorses APA! Takeover of Town Lake Animal Center," March 9, 2012.)

Then there's Item 62, CM Chris Riley's proposal (seconded by Martinez) to ease zoning restrictions on "granny flats" – i.e., making it easier to build small accessory dwelling units on residential lots, which sounds familial enough, but was getting heavy resistance at Tuesday's work session from Tovo and Morrison, who see it as stealth allowance of too much on-street parking. "Affordable housing" and "neighborhood" advocates (both terms extremely flexible) are at loggerheads over this one, so its fate today remains uncertain.

And we've barely arrived at the juicy stuff! There are no less than three items (64, 65, 66) addressing the current outcry over property tax evaluations: 64 would beef up the city's legislative agenda on the subject; 65 would challenge the Travis County Appraisal District on commercial valuations (a similar proposal failed at Commissioners Court Tuesday); and 66 would (if eventually ordinanced) require companies accepting economic incentives to promise not to challenge their own TCAD appraisals. (That sound you hear in the distance is the death knell of incentive deals.)

If Council gets through all that, and the morning briefings (South Central Waterfront Planning Initiative and Municipal Civil Service Rules – something's gotta give), they've got to resolve the revisions to the Lake Austin zoning district, and (take a deep breath) the third reading of the "vested development rights" (grandfathering) ordinance that was still trolling for amendments on Tuesday.

Those are just selected highlights: They do not include the listed five public hearings or the 21 zoning cases. With only one more regularly scheduled meeting (June 26) before the July hiatus (and a June 17 joint meeting on Project Con­nect, with the Cap Metro board), postponements may be in short supply.