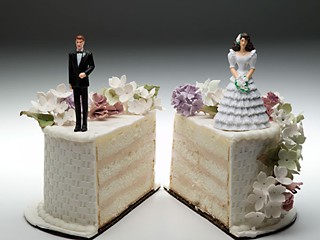 After their "Economics of Sex" video received an Internet drubbing, many wrote off the nascent Austin Institute for the Study of Family and Culture as harmless. In a socially conservative sphere already crowded with schoolmarms, AI's finger-wagging provided blog fodder, but hardly seemed primed to affect public opinion. But if their recently released research on divorce is any indication, AI may be more interested in influencing pols than polls.

The divorce research is a taste of the Institute's as-yet unreleased "Relationships in America" survey. Although AI says the purpose of the data collection effort is to "understand how American adults navigate and think about the significant relationships in their lives," the teaser page makes no bones about divorce being an area of focus. They are less forthcoming about the think-tank having an ideological bent.

Publicly, AI purports to strive "to be a leading resource for tested, rigorous academic research on questions of family, sexuality, social structures, and human relationships." But AI maintains deep ties to the religious right, most directly with conservative think-tank the Witherspoon Institute (see "Austin's New (No) Sex Institute," March 7). And AI's erudite facade is largely contradicted by the activism of the fellows. Research by AI's best-known fellow – Uni­ver­sity of Texas sociologist Mark Regnerus – has been used to bolster state defenses for upholding same-sex marriage bans. Regner­us joined another AI fellow, Joseph Price, in arguing for Michigan's marriage law. And other associates, like Ave Maria economist Catherine Pakaluk, are well-known on the conservative speaking circuit. Given that history, it's difficult to dismiss AI's interest in divorce as mere curiosity.

The timing of the research is certainly auspicious. Divorce has become the latest societal bugaboo to preoccupy the GOP. In recent years, conservative politicians have been chipping away at no-fault divorce. In January, Oklahoma lawmakers considered legislation mandating a six-month waiting period for most divorces. The Kansas legislature is currently mulling a bill that would do away with no-fault divorce altogether. In 2013, a failed North Dakota bill combined the "cooling off" period with a counseling requirement, and North Carolina lawmakers upped the ante by calling for a two-year separation period before a divorce would be granted.

The bills are based on three suppositions: 1) Divorce is harmful; 2) Divorce rates are out of control; and 3) Divorce can largely be prevented with a "cooling off" period. The ultimate goal is to curb so-called "quickie divorces," which some GOP leaders paint as rash decisions. Blaming divorce for woes ranging from community instability to poverty, proponents argue that convenience makes the decision too easy. Given roadblocks, they maintain, many will give their marriages a second chance.

The introduction to the AI research subtly echoes that line of thinking. "Divorce, even when seemingly necessary," it reads, "can be very disruptive to the lives of individuals and children." AI never explicitly mentions no-fault divorce, but the text frames the discussion within the decade of the widespread adoption of no-fault laws. "Since the 1970s," it states, "the share of Americans who eventually leave their marriages has hovered between 40 and 50%." The implication is that the laws spurred a cultural shift.

In fact, after a decadelong spike coinciding with the introduction of no-fault laws, divorce rates have mostly been on the decline. And a 2001 report written by Cen­sus Bureau demographer Rose M. Kreider states that those married since 1975 have a higher chance of marital longevity than their predecessors.

It's a fundamental mistake that calls into question the rest of AI's divorce findings. Of particular concern is a section dealing with domestic violence. AI reports that "nearly identical shares of men and women (10% and 11%, respectively) say that they have experienced some form of physical abuse at least once in their current marriage." The findings contradict the Justice Department's latest figures stating 4 in 5 victims of intimate partner violence are female. In a vacuum, the numbers seem reliable. Male victims are less likely than females to report domestic violence. In the context of no-fault divorce, the AI figures raise eyebrows. The protection of women from controlling partners was a major impetus in the passage of no-fault laws.

But those looking to verify AI's findings may be out of luck. The Austin Institute self-publishes their research, freeing them from the peer-review process that is standard for academic journals. The divorce data is published without any supporting materials, save for a link to a 2002 paper co-authored by socially conservative Simon Fraser economist Douglas Allen. At press time, AI Director Andrew Litschi says supporting materials are not yet available, noting the size of the report. "I wish we could work more quickly," Litschi says, "but we want to make sure it is good."