Is the open carry movement going off half-cocked? 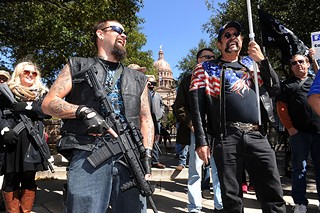 Armed open carry advocates gather in front of the Capitol during South by Southwest. (Photo by John Anderson)

On Monday, members of Open Carry Tex­as and Moms Demand Action for Gun Sense in America appeared in Austin before the Senate Committee on Agri­cul­ture, Rural Affairs, and Homeland Secur­ity to give testimony on proposals that would legalize the open carry of handguns. The hearings were mostly respectful, save for a few jeers when Sen. José Rodríguez suggested everyone in the room supported Second Amendment rights. What happened next was not.

The Open Carry Texas Facebook page posted a video Tuesday of Moms Demand Action member Hillary Rand's statement, with the comment "The logic and ignorance of #guncontrolbullies @MomsDemand and @shannonrwatts." Members of the group quickly chimed in. "It's sad to know that people like her vote, and breed," read one, preceded by "This sammich maker is defective." Another member added "So how do we know she's not a prostitute? She seems to be carrying the gear, but how do we know? Some of them have STD's, we must protect our posterity."

For Stephanie Lundy, the communi­ca­tions lead for the Texas chapter of Moms Demand Action, the tone of the social media battle has become all too familiar. She says public appearances by MDA members often provoke such responses. In response to an MDA Facebook post promoting a bell-ringing campaign to mark last year's anniversary of the Sandy Hook massacre, an open carry advocate commented, "Every time the bell rings, a first grader gets shot." A meme Lundy attributes to Come and Take It Texas' Jason Orsek has become viral in the open carry community: a photo of two assault rifles with the caption "Dear Moms Demand Action: Ooga Booga Booga."

In recent months, as well, gatherings of open carry promoters at malls, coffee shops, and other public spaces have become commonplace as open carry groups push for more lenient laws. Although gun advocates note that police do not always give the demonstrations a warm welcome, they are legal. Handguns must be concealed, but Texas law allows long guns to be carried in plain view without a permit.

The displays have become a favorite way to protest Moms Demand Action. During South by Southwest, an armed Downtown march was quickly planned in reaction to a panel on gun control that included MDA founder Shannon Watts. Last November, about 40 OCT members staged a parking lot demonstration outside an Arlington restaurant where four MDA members were having a lunchtime meeting.

Some of those same demonstrators were at a recent Tarrant County target practice, shooting at a partially clothed female mannequin. The caption on a posted video billed the practice as a "mad minute" – a military term used to describe a short burst of intense gunfire. Given the context, however, the use of the word "mad" raised a few MDA eyebrows. Members of the open carry community often refer to MDA as "mad moms."

"Our moms are tough, but it's hard not to feel alarmed when open carry activists respond to our words with demonstrations of force." Lundy says, "Instead of engaging in a reasonable dialogue, open carry activists are just growing more extreme. Open carry is completely unrestricted in Texas – with no background checks or permit process in place, we can't trust that the man with the AK-47 on his back isn't a threat to our families. What we're asking for are common sense reforms and the response we're getting demonstrates how far off the rails the other side has jumped."

In a statement, OCT's Pliny Gale characterized that as willful distortion. "MDA is a hate group that seeks to cause chaos and target any group with a mission opposed to them," he said. "They promote stripping citizens of their rights, and bullying others into accepting their loud and vague notions. Members of OCT and of our leadership have publicly received threats from MDA (from illegally calling the police to report non-crimes, to castration, to even death threats)." Gale defended the Arlington incident as a rally seeking "educated debate." He points to a photo tweeted by MDA that shows the armed protesters photographed from behind, an angle that Gale says made the scene look more menacing. Another photo, taken from the front angle at the same time, shows the group smiling. "No one was harassing anyone else," says Gale, "When the photo is actually viewed from the correct angle, it tells the full story.

"At SXSW, members were legally expressing their rights to carry arms. There was no harassment, there were no criminal events. Our members are safe, respectful, and polite. The Second Amendment protects the First Amendment, the right to gather and the right to free speech. Carrying rifles at SXSW was a celebration of our rights (even for MDA who chooses to use their right of free speech to distort the truth). At the Festival, there was a tragic car/pedestrian accident. We are saddened that this happened. I would like to point out that no one was harmed with openly carried weapons."

Lundy brushes off that criticism. "When you chose to congregate in a restaurant parking lot, armed with loaded rifles in the middle of the afternoon because our members are having a lunch meeting," she says, "you lose ability to control your image."

For Lundy, the open carry reaction is a sign that Moms Demand Action is winning the debate. "For the first time you have a massive, grassroots organization of smart, energized women who are seeing the ugly truth of how public policies and laws have been dictated for the last 30 years," she says. "The behavior you're seeing in person and on social media from these folks is a direct reaction to the anxiety they're feeling about our movement."