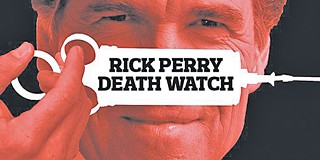 In all, Elroy Chester is responsible for at least five murders – including the February 1998 murder of a well-regarded Port Arthur fireman, Willie Ryman III, whom Chester shot after Ryman surprised him during a home invasion; Chester had also raped two of Ryman's nieces. For that crime he was sentenced to die.

Indeed, there is no doubt that Chester is a brutal killer, who terrorized Port Arthur during a crime wave that lasted 11 months – in addition to Ryman, he shot and killed at least four other people. What remains in question, however, is whether Chester is mentally retarded. To date, the courts have declared that he is not, meaning he has been cleared to be executed, scheduled now for June 12. He would become the 499th Texas inmate executed since reinstatement of the death penalty in 1976.

At the heart of Chester's case is the question of how the state of Texas carries out its mandate, declared by the Supreme Court in 2002, to protect the mentally retarded from execution – considered a violation of the constitutional ban on cruel and unusual punishment. The state has argued that Chester's demonstrably low IQ and issues with adaptive functioning – both clinical hallmarks of intellectual disability – are belied by his cruel and calculating nature. On the basis of his ability to plan and commit a series of shocking crimes, the courts have agreed that Chester is capable enough to be executed. His defense, on the other hand, has argued that the state's "test" for mental retardation – devised by the Court of Criminal Appeals in an opinion on an unrelated case – relies far too much on a layperson's perception of what mental retardation looks like – or, perhaps more importantly, doesn't look like.

Although lawmakers have repeatedly proposed legislation to codify a more clinical approach to determining mental retardation in capital cases before a defendant is put on trial, the Legislature has failed to move forward any such bill since Gov. Rick Perry in 2001 vetoed a version of the proposal.

Chester's execution was initially slated for April 24 but was ultimately postponed to correct a defect with the death warrant. Unless Perry intervenes, he will be put to death June 12. (For more on Chester's case see, "Smart Enough to Die," April 19.)