Then There's This: Out on a Limb

Bill would take an axe to local tree ordinances Never underestimate the value of trees. (Photo by Jana Birchum)

Last week, on the day before the Austin City Council acquiesced to lobbyists and their buddies at the Lege by repealing the city's Project Duration Ordinance, a state representative from Brenham laid out a bill that would further cripple Austin's ability to regulate development. Only this time it's not just Austin that's in the line of fire at the Legis­lat­ure. House Bill 1377, carried by veteran GOP Rep. Lois Kolk­horst, would wipe out existing local tree-cutting and tree preservation ordinances in cities across the state.

At a time when drought alone has already claimed an estimated one million Texas trees, HB 1377 would add to that toll by giving private landholders the right to clear-cut mature, healthy trees as they see fit. Addition­al­ly, landowners would have the option of paying a modest mitigation fee for a felled tree, or planting a small replacement tree instead. Never mind the millions of gallons of water that young trees require to survive in this drought, and never mind the next generation losing the beauty and value of historic trees.

Needless to say, developers and Tea Partiers are tickled pink over Kolkhorst's gem of a bill. But plenty of conservationists and officials from Austin, San Anton­io, Fort Worth, and West Lake Hills have registered their opposition to the legislation, which is pending in the House Urban Affairs Commit­tee.

To Kolkhorst, a cheerful woman and one of the more user-friendly Republicans in the Lege, the tree-removal question is a very basic matter of property rights – "the foundation on which Texas was built," she said. When she introduced her bill before the House Urban Affairs Committee last week, she noted that it was a little scary having her back turned to the crowd of people who had showed up to speak against it. If she heard the click of a trigger from behind, she joked, "I'll duck, and I'll let you take the bullet."

Judging from the questions committee members asked of some of the opponents, the Urban Affairs panel appears to be very much on the side of the property rights crowd. One member, Plano Rep. Jeff Leach, argued that "government runs amok over property rights."

But City Arborist Michael Embesi called the legislation shortsighted because it fails to recognize "responsible urban forest management." He noted that Austin's ordinance strikes a good balance between the development and conservation communities. In 2012, he said, 90,000 caliper inches (measured by trunk diameter) of mature trees were preserved, while 80,000 inches were removed. "This is evidence that the city of Aus­tin does not require all trees to be preserved and demonstrates that we have reasonable regulations that provided for the fastest-growing economy in the country," he said, adding that the city's tree canopy is a factor in Austin's popularity.

Apartment and condo builder Larry Peel – the only developer who registered against the bill – told the committee that he's managed to build around the trees instead of knocking them down. "All those projects have done better than my competition because of preservation," he said.

On a related note, Austin Rep. Paul Work­man (whose legislation to overturn Austin's project duration rules helped nudge a Council majority into submission last week) has introduced a revised version of HB 1858, which originally sought to give landholders the right to remove a tree if the owner believed it to be a fire hazard. New language introduced Tuesday at a House Business and Industry Committee meeting states that property currently being developed must adhere to existing tree rules. That was sufficient to win support – albeit with some reservation – from the cities of Austin and San Antonio, which had initially opposed the bill.

The revisions were not enough to win an endorsement from West Lake Hills Mayor Dave Claunch, however. "I'm not changing my position [on the bill]," he told Workman, and suggested that Workman's bill was aimed squarely at West Lake Hills, whose tree ordinance is actually much more stringent than Austin's. State leaders "complain quite loudly when the federal government tells them what to do," Claunch said, but the Legislature, with influence from lobbyists, is more than willing to overturn local laws. "For me," Claunch said, "this is about local control."

Oh, to have some of that fighting spirit on our own City Council. 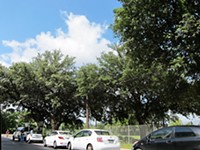