It's Not Easy Being Green

Lucia Athens is the City of Austin's Chief Sustainability Officer. Hired in 2010, Athens became the official shepherd of the city's green image – a valuable asset for Austin's self-image, and a burgeoning economic driver of other things green. She inherited a pile of good intentions and such programs as the ambitious Climate Protection Program, the Carbon Neutral Fleet Plan, and the plastic bag ban, as well as other departments already working their respective sustainability angles.

In the harshest terms, the subsequent narrative goes like this: The city's sustainability efforts rest primarily upon a foundation provided by the Climate Protection Pro­gram. But beyond that meritorious ambition stand much less successful programs – like the city's complicated effort to green its vehicle fleet.

More generally, as currently practiced by our civic honchos, the idea of "sustainability" remains such an amorphous, evolving blob that it's very hard to determine or confirm any demonstrable benefits offered by the $1.38 million budget of the Office of Sustainability. With no single bottom-line standard as a measure of success – nor any real authority to push departments toward sustainability – Athens has found herself overloaded with the ambitions of administrations past, the uncompromising demands of a vocal environmental community, and little means to demonstrate to skeptical City Council members that she's accomplished anything.

Still, there is undoubtedly value in Aus­tin's image as a sustainable place. "I think our reputation and our quality of life is a key attractor for businesses that are coming here," says Athens. "A lot of the businesses that have come here – we have a lot of high-tech, we have a lot of businesses that their value is really based on the intellectual capital within their company, so the kinds of creative people that they are relying on ... [are] attracted to communities like Austin." By "sustainability" the city means a three-part standard – "a balance," according to city PR materials, "among three sets of goals: 1) prosperity and jobs; 2) conservation and the environment; and 3) community health, equity, and cultural vitality." Together, these are meant to constitute not just a set of abstract values, but a set of common principles in action.

In Austin, sustainability's nuts and bolts begin with the Climate Protection Program, with roots that go back more than a decade. Council formalized the idea in 2007 as the Austin Climate Protection Plan. Former Chron­icle reporter Katherine Gregor – who now works for the city's Sustainability Office – offered a summation in the Dec. 7, 2007 issue: "At the ACPP's February launch, it was clear that achieving the milestone goals – set for 2012 to 2020 – would be a marathon project. The Municipal Plan alone requires a wholesale re-examination of how every city department thinks, operates, and does business, in order to realize the maximum possible reductions in the city's carbon footprint."

From the beginning it was a daunting mission; a "wholesale re-examination" takes time. But it also takes authority – the power to corral the city's department heads and push for broad changes; the power to move freely through a bureaucracy; the power that only comes with across the board buy-in (a true civic rarity), some real iron-fistedness, intimate knowledge of and access to city leaders – or some kind of combination of all those elements.

As a major consumer of fossil fuels, Austin Energy played a major role in the ACPP implementation. Roger Duncan was named utility General Manager in 2008. As a former Council member and long-time Austin politico, Duncan had the experience, the contacts, and the skill set to run that kind of program. He wasn't a stranger to Council offices. He knew the right strings to pull. But Duncan retired from AE in 2010. Two months later, Assistant City Manager Robert Goode – temporarily filling in as the Austin Energy GM – presented the utility's Climate Protection Plan, the centerpiece of the climate protection program, to Council. The plan was an outgrowth of the 2007 program, and it was just as ambitious: that the utility would generate 35% of its electricity via renewable resources by 2020.

By September of that year, Athens was hired, and almost immediately absorbed the ACPP as part of her Office of Sustain­a­bility. In an important – if bureaucratic – note, her office reported to City Man­ag­er Marc Ott. The city's sustainability efforts would now all run through him.

On Dec. 6, 2012, Athens delivered an update to City Council on her then two-year-old Office of Sustainability. Whispers about the efficacy – or lack thereof – of her office had preceded her appearance. Athens attempted to walk everyone through the full picture: what her office, and by extension, she, had been doing since 2010. She offered Council members a memorable visual: a slide full of dots standing for the myriad sustainability programs currently underway throughout all city departments. Yet many of those dots signified efforts managed by other offices, programs that predated her hiring, or both. To illustrate her role, Athens put those dots inside a cylinder. "A big part of my job has been getting my arms around all of the things that we are doing across the entire city organization – all departments, all 12,000 staff," she said. "Just because we have an Office of Sustainability, obviously that's not all being delivered by a small office."

Following Athens' presentation, Council Members Bill Spelman and Chris Riley had a few questions. Riley asked for metrics that might illustrate progress in involving the community in sustainability. Spelman broadened the line of Riley's questions. He pointed to the slides of Athens' presentation. "It occurs to me that if somebody looks at [these] they are going to say 'Wow, look at all of the great things that the city of Austin is doing.'" Spelman offered. "And that's fine, but what I'd really like to elicit from folks is, 'Wow, look at all the great results the city of Austin is getting.'"

Athens told Riley that it was difficult to design performance metrics for community engagement, but that she and her colleagues were working with UT-Austin on measuring the potential impact of the implementation of all of the city's sustainability plans, and what effects that might have on the city's overall carbon neutrality. To Spelman, she said simply: "Excellent point. Couldn't agree with you more."

There were more questions, but as a whole they merged roughly into one: As the director for the organization charged with a key city mission, we're wondering – what is it that you do?

It remains a question that reverberates around the second floor at City Hall. "We certainly haven't received any hard metrics," Spelman, the Council's resident data hound, told the Chronicle. "I think it's great to have a visionary person as the head of the department, but we also need to back up the vision with some clear evidence that we're accomplishing something of value." 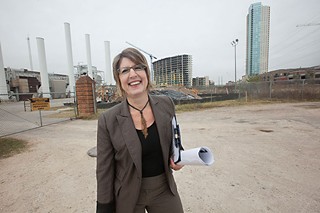 Athens adds that such an examination may be coming: "[W]e just helped get a fed­er­al grant with CAMPO that will help us assess the vulnerability of transportation infrastructure to climate change," she wrote. "A life-cycle analysis could potentially be applied to this area, but it's too soon to know exactly how the grant will be spent."

For his part, City Manager Ott insists that some portion of what Athens does may never translate into hard data. "The value proposition associated with that office, and the mission that it has, is more complex than just the quantitative notion of cost-benefit," he told the Chronicle.