The View From 21 Rio 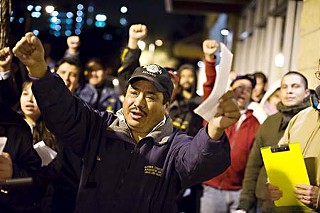 A crowd that included construction workers and their families turned out Dec. 16 for a vigil in memory of three workers who died as a result of a scaffolding accident at a West Campus apartment project. (Photo by Sandy Carson)

The street scene outside the 21 Rio apartment building at 21st and Rio Grande normally shows little sign of the June 10 construction accident that claimed the lives of three ­workers in a scaffolding collapse. The now completed tower sports a bright-red neon "21 Rio" logo atop its 21 floors, and the marketing website targeted primarily at University of Texas students ("iPhone and iPod Touch Compat­ible!") proclaims the building "the most prestigious high rise residence in West Campus." The only safety concern mentioned is "limited access entry" available to those prospective residents ready to carry the $1,300 to $3,500 monthly rent.

But last Wednesday evening, Dec. 16, in the cold, windy twilight, about 50 people, mostly construction workers and their families, held a vigil in memory of Wilson Joel Irias Cerritos, Raudel Ramirez Camacho, and Jesus Angel Lopez Perez, who were working on the building's exterior and died after falling from the 11th floor to the street below. After a brief processional along the sidewalk, the crowd stood before three small memorial crosses marked by flowers and the workers' boots and hard hats – akin to soldiers lost in combat – and held a ceremony eulogizing the three men and addressing the poor working conditions they had faced on the job site. Two local pastors, Marivel Reyes and Tom Vandestadt, spoke of the Christian tradition of defending workers and the poor, and two workers, Filemón Salas and Ely Rodriguez, described the unsafe conditions on the site and the workers' struggle for just treatment.

Their safety complaints had been officially validated earlier that week, when the U.S. Occupational Safety and Health Admin­i­stra­tion issued a litany of proposed penalties, totaling $159,600, for safety violations against four contractors involved in the 21 Rio construction project. Specifically, OSHA cited: 1) subcontractor Capoera Construction for three "serious" violations for failures in health and safety and inspection standards and two repeat violations for inadequate scaffold protection and training systems ($36,400); 2) scaffold manufacturer American Mast Climbers for a "willful" violation of poor design and installation, as well as eight related serious violations ($86,800); 3) general contractor Andres Construction Services ($14,000); and 4) exterior contractor Greater Metroplex Interiors ($22,400), for four serious violations based on similar failures in safety equipment and training. According to OSHA's news release, "A willful violation is one committed with intentional, knowing or voluntary disregard for the law's requirements, or with plain indifference to employee safety and health; a serious violation is one that could cause death or physical harm that can result from a hazard an employer knew or should have known exists."

"The supported scaffold from which employees were working collapsed, causing workers to fall more than 100 feet to their death," said Eric Harbin, OSHA's Austin-area director, in a press statement. "If scaffolding parts had been inspected and replaced or repaired as needed, it is possible that this tragic accident and loss of life could have been avoided." The companies have 15 business days to appeal the proposed penalties; according to Elizabeth Todd of OSHA's Dallas office of public affairs, three of them (all but Capoera) have chosen to request an "informal conference" with the Austin office to discuss potential reductions of the penalties as well as any planned safety abatements. Austin-based Andres Construction Services declined to comment on the accident or OSHA's penalties; calls to American Mast Climbers (in Whitney) and Greater Metroplex Interiors (in Southlake) were not returned.

The three workers were employed directly by subcontractor Capoera Construction (hired by GMI), officially based in Margate, Fla., but apparently without a phone number there. The company has not been reachable since the accident, creating yet another hardship for the employees, who say many had not been paid for their final weeks of work, including overtime. The Workers Defense Project, which organized last week's vigil, says that Capoera directly owed 18 workers an estimated total of $55,000 on the 21 Rio job, and overall $120,000 for work on 21 Rio and on another job site. Emily Timm of WDP said that the workers believe more than 25 workers may have been shorted on wages and that they're trying to persuade the other contractors to take responsibility for the missing pay. "We did our work, we even risked our lives out there on that worksite," said German Zaravia in a statement released by WDP. "No one should have to die for their job and no one should have to fight just to be paid." Zaravia says he is owed $7,000 in back wages.

A lawsuit is pending on behalf of the deceased workers, and the Austin Police Department is investigating whether any criminal violations occurred. Workplace safety is primarily governed by state and federal law, but the City Council is expecting staff recommendations in January to create a local construction safety program.

At the memorial, a brown paper sign taped to the 21 Rio windows invited public comment on the theme, "Safety is everyone's responsibility." In a statement, Timm commented: "We've seen that employers who are willing to cut corners on safety are also likely to show a complete disregard for workers' rights. It's not a coincidence that wage theft would take place on a worksite that had gross safety violations."