No Indictment in Lunt Shooting

TABC explores changes within agency in wake of shooting

Lunt had been spotted driving erratically Downtown – including swerving into pedestrian traffic and nearly hitting someone. Austin Police pursued Lunt but later called the pursuit off and issued a "be on the lookout" for the white truck he was driving. Three TABC officers – Michael Cronin, John Altum, and Greg Lewis (in un-marked cars) – picked up where Austin Police Department left off, following Lunt until he reached the parking lot of the Longhorn Land­ing apartments in South-east Austin. As Lunt parked and got out of the truck, Cronin and Altum approached; gun drawn, Cronin yelled, "Stop, police." Lunt jumped back in the truck, according to a press statement from Travis County District Attorney Rosemary Lehmberg, and tried to drive off. When it looked like the truck would hit Cronin, Altum began to fire. In all, he fired at Lunt 16 times, and Cronin fired three times.

During the course of the grand jury's investigation into the shooting, certain questions arose, Lehmberg said, including whether the TABC agents were actually pursuing "the primary mission of their agency" at the time of the shooting, whether they were acting in accordance with TABC policy by approaching the car without waiting for APD backup, and whether the agents – without "distinctly recognizable law enforcement uniforms" and while driving unmarked cars – were properly equipped to effect an arrest. TABC Chief of Field Operations Joel Moreno and agency administrator Alan Steen testified before the grand jury and are exploring "avenues of change" within the agency, Steen said in a statement. Will Texas Patch Up TABC Before It Bursts?
If ever an agency needed to be scorched by the state’s Sunset Act, it’s the Texas Alcoholic Beverage Com­mis­sion 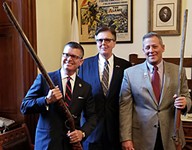 How Has TABC Screwed You Lately?
Tales from the front lines of the Austin entertainment industry