That was what a neighbor told the Austin American-Statesman about Wilson Joel Iri­as Cerritos, 30, and Jesus Angel Lopez Perez, 28, two of the three men who died June 10 while working on the construction of the 21 Rio high-rise apartment building at 21st and Rio Grande in West Campus. According to press reports, Irias and Lopez were from Honduras; the third man killed, Raudel Ramirez Camacho, 27, was from Querétaro, Mexico, where he leaves a widow and two small children. The three men were on a scaffold 11 stories high when it appeared to collapse, according to witnesses, and the men fell to their deaths. (A fourth man was able to hold on to equipment and received only minor injuries.) The circumstances of the deaths remain under investigation by the Austin office of Occu­pa­tional Safety & Health Administration of the federal Department of Labor; according to Elizabeth Todd, an OSHA spokeswoman based in Dallas, safety compliance investigators have six months to complete their investigation before releasing the results.

According to city spokeswoman Nicole Sherbert, the Austin Fire Department and EMS were the first responders at the site in an attempt to save lives, and subsequently the Austin Police Department reviewed the scene to determine whether there might have been a criminal violation, for example, a cut line or other sabotage. "But basically, after that, it's all OSHA," Sherbert said. She added that a check with the Watershed Protec­tion and Development Review Department had confirmed that the project's various construction permits were all in order and up to date.

By grim coincidence, the deaths of the three men took place just as the Workers Defense Project was about to release its report, Building Austin, Building Injustice: Working Conditions in Austin's Construction Industry. At a Tuesday morning press conference held outside City Hall by WDP, the previous week's deaths threw a confirming shadow over the report's highlighted details, which include the following: 1) In 2007, 142 construction workers died on the job in Texas, more than any other state (by nearly two to one), translating to a death roughly every 2.5 days; 2) one in five construction workers has been seriously injured, with little recourse to medical care for which employers often decline to pay; 3) three out of four construction workers do not have health insurance.

Although the WDP report and press conference mainly addressed the larger issue of working conditions in the construction industry in Austin and in Texas, people familiar with the safety issue say that the recent Austin deaths appear unsurprising and representative. "Just looking at the news photographs and the descriptions of the accident, it looks like they had no safety lines or harnesses," said Michael Cun­ning­ham, secretary-treasurer of the union Building and Construction Trades Coun­cil, AFL-CIO. As specified in federally mandated regulations, required safety harnesses for employees working at a certain height above the ground would anchor them to some fixed point on the building, so that (for example) if scaffolding collapses, they would be held by the harnesses, which also flex to break the fall. "Then we're looking at a rescue situation, instead of a fatality situation," said Cunningham. He added that OSHA also requires a 10-hour training course for employees to learn how to use such equipment and that the federal agency is charged with inspecting construction sites to make certain that the safety practices are being properly followed. "But OSHA is so understaffed, especially over the last 10 years," said Cunningham, "someone calculated that just in Texas, it would take 300 years for their staff to inspect every site."

Among the workers at Tuesday's press conference was Hector Hernandez, 53, who said he no longer works construction but had done so for 12 years. He said that in his experience, with some exceptions for conscientious companies, many employers not only did not supply harnesses or safety lines but didn't supply even simpler safety gear like hard hats. "If you wanted to have that safety equipment," Hernandez said, "the worker had to buy it himself." Moreover, he said, most injured workers simply cannot afford medical care, reiterating the WDP report's statistic that 76% of workers do not have insurance. "I broke my ankle on one job," he said, "and I was simply sent home and was without work for a couple of months. No insurance, and I had to take care of my medical bills and all my other expenses without other help."

Asked his experience of OSHA safety inspections, Hernandez said that the inspections were often scheduled in advance, and workers doing dangerous jobs were either sent home or told not to work those tasks while the inspectors were present. Todd said: "That doesn't sound right to me. We do random inspections, both announced and unannounced."

Beside the speakers at Tuesday's press conference were 142 pairs of workmen's boots, to represent the 142 construction workers killed on the job in Texas in 2007 (the most recent figures available). When the speeches ended, Father John Korcs­mar of Dolores Catholic Church offered a prayer in memory of Wilson Irias, Jesus Lopez, and Raudel Ramirez, the departed paisanos – literally "peasants," but more accurately countrymen, neighbors, fellow workers. Young men all, their boots have now taken their place among these real and symbolic mementos of unnecessary deaths. 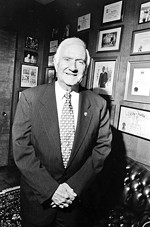