No Relief for Rodney Reed 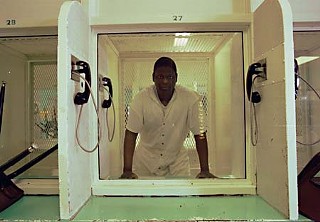 The Texas Court of Criminal Appeals ruled on Dec. 17 that death row inmate Rodney Reed has failed to prove that prosecutors suppressed evidence in his capital murder trial 10 years ago. In 1998, Reed was convicted and sentenced to die for the 1996 murder of Stacey Stites. Stites, who worked early mornings at the Bastrop H-E-B, failed to show up for work on April 23, 1996, and her body was later found dumped by the side of a county road. The pickup truck in which she allegedly drove to work – and which belonged to her fiancé, former George­town Police Sgt. Jimmy Fennell – was found parked in the Bastrop High School parking lot. DNA evidence found on Stites' body eventually led police to Reed; Reed maintains that it was there because he'd been having a consensual sexual relationship with Stites – a relationship he says Fennell knew about.

Aside from the DNA evidence, there is no other physical evidence tying Reed to the crime, and his supporters have long claimed that Fennell was a far more likely suspect. Fennell – then a cop in Giddings, where he and Stites were living – was briefly investigated by authorities working the case, but he was ultimately dismissed as a suspect. (For more on the case, see "Who Killed Stacey Stites?" May 24, 2002.) Questions about Fennell's possible involvement have persisted, and it hasn't helped that in Septem­ber, he pleaded guilty to kidnapping and improper sexual conduct with a person in custody – he was given a 10-year prison sentence for those crimes.

Reed's case has been wading through the courts for nearly 10 years; his defenders have consistently questioned whether prosecutors withheld potentially exculpatory evidence. After a 2006 hearing on the matter in a Bastrop Co. district court, Judge Reva Towslee Corbett (whose father presided over Reed's original trial) concluded that there was not credible evidence to suggest the state had done anything wrong. In part because the judge simply adopted whole the findings of fact provided her by the state at the conclusion of the hearing, the CCA took up Reed's appeal to decide whether certain inaccuracies in those conclusions were enough to trigger some relief for Reed. But last week, the court ruled that they were not. A "few of the trial judge's fact findings were either unsupported by the record or appeared, in some fashion, to be misleading," Judge Michael Keasler wrote for the court. "Mindful of the role of an advocate, the trial judge as a neutral arbiter should have more carefully scrutinized the state's proposed findings to ensure that they accurately reflect the evidence before adopting them verbatim." Though Towslee Corbett did not do so – thus "unnecessarily complicating" its review of the case – the court ultimately found that the evidence the state withheld was not credible and would not have swayed a jury to acquit Reed. This conclusion is puzzling to Reed's attorney Bryce Benjet, who wonders how the CCA could simply rubber-stamp Towslee Corbett's findings after criticizing her for accepting the state's findings verbatim.

Similarly, the court also concluded that evidence presented by Reed's defenders did not meet the "gateway" requirement for establishing a case that Reed might actually be innocent. "Initially, we note that what separates this case from the majority of gateway-innocence cases is the complete lack of a cohesive theory of innocence," the court opined. "Reed's claim of innocence is seriously disjointed and fragmented – he presents numerous alternative but critically incomplete theories." In the end, Keasler wrote, "the new evidence before us fails to tell a complete, rational exculpatory narrative that exonerates Reed."

Reed's attorneys (including Benjet and former CCA Judge Morris Overstreet) have pointed to Fennell's recent trouble with the law – and his volatile relationship shortly after Stites' death with another woman, who accused Fennell of stalking her – as evidence that he was unstable and violent. Even combined with other evidence (chiefly, witness statements affirming a relationship between Reed and Stites that the court deemed not credible or unpersuasive), the evidence the court has so far considered is apparently not enough to build a solid legal bridge for a claim of innocence. "Although this new evidence may indeed arouse a healthy suspicion that Fennell had some involvement in Stacey's death," the court wrote, "we are not convinced that Reed has shown by a preponderance of the evidence that no reasonable juror, confronted with this evidence, would have found him guilty beyond a reasonable doubt."

Reed attorney Benjet says the ruling is, among other things, frustrating – in part, because the court still has pending before it three other related appeals concerning misconduct in Reed's case. "What is frustrating is that every time we learn a new fact, [the court] won't just let you go tell them about it. They require you to file a new appeal," he said, and that may be part of the reason the court considers the defense's theories incomplete. "They force us to proceed in this fashion and then say that we haven't presented this in a coherent fashion?"

Indeed, still pending before the court is a claim that prosecutors had failed to disclose to the defense information about Pamela Duncan, who began dating Fennell a little more than three months after Stites was murdered. In an affidavit filed with the court, Duncan described Fennell as "abusive, possessive, controlling, and extremely prejudiced toward African-Americans." According to Dun­can, after she broke it off with him in 1997, he began stalking her – yet this information never made it to Reed's defenders until recently, says Benjet. Moreover, the defense is still waiting for the court to rule on the more detailed information they've only recently been able to gather about Fennell's history and allegations of his misconduct, including the charges of sexual assault that precipitated his current turn inside. "There is a coherent story here – that it is at least as likely that Fennell [killed Stites], if not more so," says Benjet.

When and how the pending appeals will be considered remains to be seen, but Benjet said the court could have ordered a hearing in the lower court to consider the evidence related to Fennell. In all, said Benjet, the court has rejected as not credible 15 witnesses for the defense – including two forensic experts and nine witnesses who said they knew of an affair between Reed and Stites – in favor of the state's theory that Reed (in their estimation, a stranger to Stites) stop­ped her as she drove to work, pulled her out of her truck, raped her, and killed her. But why, asks Benjet, would all of Reed's witnesses lie? "Isn't it just possible that there is one person that isn't telling the truth – Jimmy Fen­nell, a rapist, sitting in prison?"