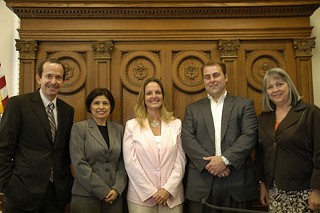 Hays Co. commissioners have been turning a shade of green recently, after nearly a decade of rampant growth championed under previous courts. Flush with a new $30 million parks bond in one of the nation's fastest-growing counties, the commissioners have begun to build a legacy of environmentalism.

Three Democrats elected in 2006 – County Judge Liz Sumter, Precinct 2 Commissioner Jeff Barton, and Precinct 4 Commissioner Karen Ford – dramatically changed the face of what had long been a GOP-controlled Commissioners Court. "I think the Democrats taking back the court has to be thought of as a positive thing for environmental issues, even though in our county we have many Republicans who are very committed to preservation and environmental health," says Barton. While Democrats hold a 4-to-1 advantage in seats, the lone Republican, Precinct 3 Commissioner Will Conley, sees himself as a conservative with a green streak. He's been as enthusiastic about conservation as his colleagues. "Conservation and protection of open space is vitally important to my county, and it's important to me personally, and it's an issue we're forced to deal with, with the unprecedented growth."

Barton says the consensus has been an advantage that few legislative bodies possess. "In the broad scheme, we share a common vision and a common commitment to preserving natural resources in Hays County. It is that commonality of purpose which has made us effective." Ford agrees. "Everyone on the court understands the importance of open-space protection and having natural areas for our citizens to enjoy close up."

The most obvious manifestation of this new green mindset has been the parks bond election and the resultant focus on habitat preservation, watershed protection, and water access for citizens. The court has allocated roughly half of the $30 million approved by voters and has earmarked a minimum of $11.5 million of the remaining sum to be specifically directed toward open-space projects. The county has funded parks at Blue Hole in Wimberley, Stagecoach Park in Buda, a park in Dripping Springs along Little Barton Creek, the North East Regional Park in Kyle, and the development of a habitat conservation in San Marcos. The court has yet to vote on two large projects still in the works – Dahlstrom Ranch (see "Austin May Join Effort to Buy Aquifer Property") and Blanco Bluff – both of which have significant environmental features. The court has also taken stands against large developments that could put water quality in jeopardy.

Conley says the county's growth has increased the need for such green space. "Once it's gone, you're never going to get it back again, and we realize that and are doing our best to make sure there's an equal balance in the county." Three years ago he took the lead in securing $750,000 in federal grants to start a Habitat Conservation Plan which would set aside space for endangered birds – similar to the Balcones Canyonlands Preserve in Travis Co. His efforts to set aside land in the western portion of the county has struck a chord with the most senior member of the court, Precinct 1 Commissioner Debbie Ingalsbe. "I strongly believe we need to acquire and maintain open space and green space," she says, noting that the county's west side is the most environmentally sensitive because of its location atop the recharge zone of the Edwards Aquifer.

Most recently, the court convened in an emergency session to reject a settlement agreement in a wastewater case involving Belterra, a planned subdivision whose developers are seeking to discharge treated effluent into Bear Creek, which feeds Barton Springs. By rejecting the detailed compromise, Hays triggered a clause with the city of Austin, which was then obligated to join the county and downstream landowners in protesting the application at the state level. The case is currently under review at the Texas Commission on Environmental Quality.

During the hearings, Ray Chester, an attorney for the developers, named Ford as the ringleader in gathering support against Belterra on the court. "I was opposed to it before I was elected commissioner," Ford says. "Early on I wanted to educate people as to what this might mean to the creek ... and the precedent it would set." And, she contends, "Clean water is not a partisan issue." As if to back that up, Republican Conley says, "Fighting the discharge issue and making sure that precedent isn't set in our county ... was an important position for our court to take, and I was in full favor in support of that position."

Later this year, the commissioners are expected to approve new subdivision rules intended to give the county more control over developments, an area where counties have gained ground with the Legislature. "We want more authority as far as density ... buffer zones, and impact fees," Ingalsbe says. Barton calls the new rules a "landmark event" for the county. Ideally, Hays will be able to take advantage of changes in state law and, he says, "stretch the limits of what counties can do." In years past, developers only had to receive permitting based on their first phase of the subdivision; when the new county rules are approved, they will make permanent the interim regulation requiring developers to prove verifiable and sustainable water sources for those new communities.

One unique aspect of the new rules, Ford says, will be the inclusion of rainwater-collection systems in the water budget. "I don't know whether any other county has that within their subdivision rules," she says. With their eyes set on the future, the commissioners want to ensure their county can sustain its own growth well into the next generation.