Who's Paul Robbins, and what's a cooling plant? 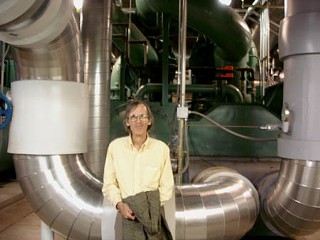 In June, the Austin City Council voted to rename Downtown's District Cooling Plant 1 after Paul Robbins, publisher of the Austin Envi­ron­ment­al Directory and perhaps the city's most indefatigable green activist. Clad in his signature tweed blazer, penny loafers, and magnifying-glass-like spectacles, Robbins is the rail-thin gent with longish gray hair who's often tersely addressing council during citizens' communication, skewering the city over an energy-related misgiving or calling for far-reaching reforms. Was the renaming the city's smartass way of telling Robbins to "chill out"? And just what the heck is a district cooling plant, anyway?

Robbins began calling for a Downtown cooling plant in the mid-1990s. Aided by fellow civic-minded greens Shudde Fath, Scott Johnson, Andrew Donoho, and AE's Roger Duncan, he was able to advance the concept through the city's Electric Utility Commission and to City Council, which, following a feasibility study, agreed to build the plant in 2000 -- originally intending it to cool the state Hobby office building, the new City Hall, and the Computer Sciences Corp. complex. Now, Duncan says, Austin Energy's problem is the number of Downtown buildings whose owners are clamoring to hook up to the plant. Shudde Fath, a 90-year-old Austin environmental legend and 30-year veteran of Austin's Electric Utility Commission, met Robbins in the Seventies when they, like many local environmental elders, were fighting the South Texas Nuclear Project. Prior to a tour of the plant Friday, she said, "Paul has always been the attack dog nipping at the city's heels." Laughing, she continued, "And here we are; the city's going to honor him now." The Rob­bins plant has since been duplicated on the east end of Downtown and at the Domain and Mueller mixed-use developments.

Carved out of the center of the Hobby state parking garage at Third and San Anton­io, the plant freezes water in three-story-tall coils overnight, when electricity demand and price are lowest, and begins piping water through the coils as the daytime heat intensifies. The near-freezing water is then shuttled though underground pipes to the air conditioners of some of Downtown's largest buildings, supplementing their needs for cumbersome, complete cooling systems of their own. But most crucial is the plant's ability to transform a staggering peak in electricity demand into a negative peak, allowing AE to meet the needs of its customers without activating additional power plants. Air conditioning accounts for 46% of AE's overall peak energy consumption; the Robbins plant removes the energy equivalent of more than 4,500 homes from the grid during afternoon peaks.

At the plant dedication ceremony Friday, the ever humble Robbins said, "There aren't enough power plants and infrastructure in this city to name for every person that deserves it." Wendy Nine, an old friend of Robbins' who came in from New Mexico for the dedication, said the plant's unassuming exterior and dynamic interior is a manifestation of the power plant that is Paul Robbins.

Buildings Hooked Up to the Paul Robbins District Cooling Plant