Austin novelty card company gets crushed by lawyers and money 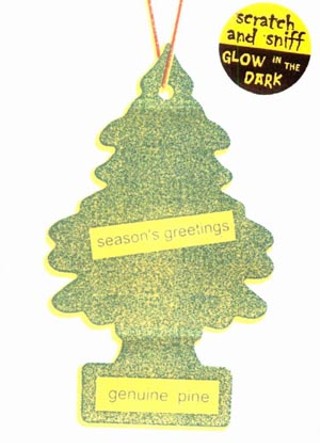 The makers of the Little Tree car air freshener were not amused by this gift card parody by Austin's Corndog Cards & Novelties.

As it turns out, a noxious pine scent isn't the only thing that stinks about Car-Freshner Corporation's ubiquitous "Little Tree" car air freshener. Given the content of a settlement filed in a New York federal district court on March 2, it appears that CFC and Little Tree trademark-holder Julius Samann Ltd. have an equally stinky attitude toward anyone who dares to make fun of their cardboard, tree-shaped freshener.

At issue is a lawsuit, filed last year by CFC and Samann against Dale Detwiler, owner of the Austin-based Corndog Cards & Novelties, alleging that Detwiler "procured and sold" greeting cards that infringed on CFC and Samann's trademarked "Tree Design" by producing a glow-in-the-dark, scratch-and-sniff holiday greeting card that bears a likeness to the Little Tree. That irked CFC and Samann, who argued that the pine tree outline on Detwiler's card was "confusingly similar" to their trademarked product and, somehow, might cause consumers to think that Detwiler's greeting cards were "licensed, sponsored, or approved," by New York-based air freshener company CFC and/or Bermuda-based Little Tree trademark-holder Samann. After receiving a letter from Car-Freshner attorney Alpa V. Patel last March, which clearly read as a prelude to a lawsuit, Detwiler hired Austin attorney Justin Welch and fired back, filing suit against the Little Tree Mafia in Travis Co. district court, seeking protection based on their argument that the Corndog tree card was in fact a parody of the Little Tree and, therefore, a form of protected speech and exempt from a trademark-infringement suit. Welch argued that Detwiler's card is meant to "evoke" the trademarked tree, but only in order to poke fun at the air freshener. The box the cards come in "unequivocally disassociates itself" from the original trademark by poking fun at the pine-scented product, he told the Chronicle. ("The differences between these unusual cards and an actual car freshener are: 1) our cards glow in the dark and 2) give off a weird, sticky pine smell only when you scratch and sniff them, instead of all the damn time, until you get carsick and throw up," reads the box.)

In response, CFC and Samann instead filed a federal suit against Detwiler and Corndog (and, eventually, against Philadelphia-based Urban Outfitters Inc., retailers of the card) in New York. The litigation slogged forward for nearly a year before the two sides reached a settlement March 2. CFC and Samann quickly issued a press release claiming victory for their 54-year-old product, announcing that, after "battling" in court, Car-Freshner Corp., had finally "prevailed" in its suit over the "unauthorized use of its famous Tree design," and that Detwiler and Corndog had been permanently enjoined from any further use of the Little Tree design. But in fact, while the case was tied up in court for nearly a year, the real facts of the case – that is, whether Detwiler's card was in fact a parody, and if so, whether that would protect his use of the Little Tree shape – were never actually presented to a federal judge or to a jury. Instead, Welch said, Detwiler was, in essence, forced to settle the case before the merits of the suit were ever considered, solely because he did not have enough money to wage a long-distance battle in New York federal court. As it turns out, the prolonged court battle was concerned, entirely, with determining where – in Texas or in New York – the suit should take place. In the end, CFC and Samann prevailed in New York, and that forced Detwiler to settle. "It's kind of crappy, but that's how it goes," said Welch. "If you can't afford to play the game, you can't play and you get bullied; it's pretty shitty." The most painful part, Welch said, was that CFC and Samann required Detwiler to agree that he is not allowed to use the trademark design, even as a "parody of [the] Tree Design." But that wasn't all; in addition, CFC is requiring Detwiler not only to turn over all of his leftover cards, but also to release to the company the names of all customers and retailers who bought the pine tree holiday card, to provide the amount each customer paid and – believe it or not – to pay $100 in damages to the corporation. (In an apparent token kindness – which itself does not rule out the possibility of any further legal battles – the company did agree not to "institute or threaten" litigation against any of Detwiler's retail customers "based solely" on their sale of the card.) And, according to the settlement, if Detwiler fails to comply he'll be forced to pay CFC one-third of the selling price of "each unit" of cards, to pay $10,000 for "each violation" of the settlement, and to pay for "reasonable" attorney fees should the mess force the big bad company back into court.

To be sure, CFC and Samann have been, er, aggressive in defending their trademarked tree – so aggressive, in fact, that it appears they've lost all sense of proportion. Since 2002, Car-Freshner has filed at least four similar suits, and at least eight or so others over the past decade. The company won against Big Lots!, which was selling a straight knockoff pine-scented, tree-shaped air freshener, but lost against Johnson & Johnson, which had the audacity to market a pine tree-shaped plug-in air freshener. Going after the Big Lots! knockoff certainly seems fair, considering the company was directly challenging the Little Tree market, but considering that it's unlikely that anyone would think Detwiler's card was actually something meant to hang from a rear-view mirror, their aggressive move against the homegrown businessman seems out of proportion and downright humorless. (In response to a request for comment, a lawyer representing CFC told me that, unfortunately, she wouldn't be able to speak on the record about the case.) It would be one thing, notes Welch, if CFC actually manufactured and sold stationary or greeting cards of their own, but since they don't, it's hard to imagine that, if Detwiler had the money to fight, the company would have had any chance of winning their case. "I think that anyone who reads the settlement will realize that they beat the little guy [Detwiler] into submission," said Welch. "It really was heartbreaking." 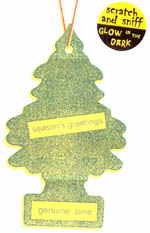 The Odd Case of Pinetree v. Corndog
An Austinite defends his product as parody