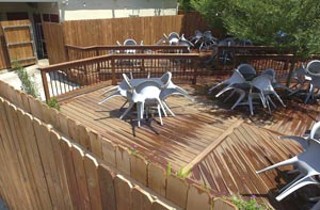 The South Congress Cafe’s patio was built without the required city permits, prompting the city to take the matter to court. (Photo By John Anderson)

The South Congress Cafe closed its rear deck Tuesday as part of an agreement with the city of Austin, reached last Thursday afternoon just as State District Judge Scott Jenkins prepared to execute a temporary restraining order to prohibit dining on the deck. Parent company Trudy's Texas Star Inc. has been in hot water with the city over the South Congress Cafe, the company's new upscale eatery located at 1600 S. Congress, ever since city inspectors found extensive unpermitted construction there in February, which inspectors say continued despite three separate stop-work orders. Officials later discovered another illegal structure on the premises, a shed adjoining the back patio that had been converted into a cooler and bar, again without required permits.

The city originally sought to prosecute Trudy's in municipal court on class C misdemeanor charges for the scofflaw patio and surrounding privacy fence, charging that they were built without an approved site plan, they eliminated required on-site parking, and they covered a city sidewalk and right of way. Officials have stated on several occasions that the South Congress Cafe violations are among the most flagrant they've seen.

Paul Tomasovic, the city's zoning and code compliance legal coordinator, said Trudy's never accepted the agreement's terms prior to the city's legal action in state court. "We went up to the very last minute to get the agreement, having had several conversations with their attorney before a temporary restraining order was filed." At that point, said Tomasovic, Trudy's "reluctantly" agreed to all of the city's requests.

Perennial zoning lawyer Richard Suttle, who represents the Truesdell family, which owns Trudy's, didn't return several calls for comment. A fixture at city zoning and code hearings, Suttle – who could body double for Gov. Rick Perry – smoothly, and usually successfully, pleads everything from environmental variances for new Wal-Marts to historic landmark cases for homeowners. Curiously, he told the Statesman in July that he didn't know Trudy's needed a permit to build the deck.

Tomasovic said city staff didn't become aware of the cooler and bar shed behind the cafe until midway through the case. "Someone said they had busted holes in the wall and began serving alcohol," he recalled. City inspectors later confirmed that beer and margaritas were being poured out of the small building, which had also been converted into a walk-in cooler, yet they found no plumbing permits, electrical permits, or site plans on file.

Under the enforced agreement, along with Tuesday's deck closure, Trudy's must discontinue use of the illegal shed within two weeks, and submit within 30 days complete site plans for an off-street parking facility and all newly built or redeveloped structures. Trudy's then has 60 days to make the necessary repairs to satisfy the site plans, 60 days to get building plans approved, and 90 days to complete the work to bring everything into compliance. Any deviation could immediately bring the company back to court, Tomasovic said, where the city could request an injunction calling for the removal of all the unpermitted structures. Also, any use of the patio after Tuesday could carry a $1,500 fine.

Cory Walton, of the Bouldin Creek Neighborhood Association, which represents the surrounding residents, applauded the city's actions. "This is almost the first time the city has actually taken code enforcement to the point of filing civil charges, which, in this case of out-and-out defiance, was absolutely necessary." Walton wondered, however, how strictly the agreement's off-site parking requirement will be applied, since once legal on-street parking fills up, he said, patrons begin blocking driveways and fire hydrants, as well as decreasing street visibility by parking ever closer to four-way stops. The overflow affects walkers, bicyclists, joggers, and people pushing strollers, Walton said. "It doesn't lend itself to a residential environment."