The St. Andrew's pastor says a Presbyterian trial is 'what needs to happen' 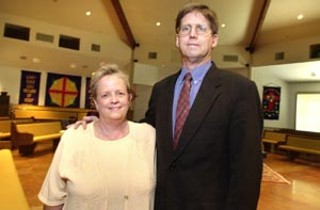 When the Rev. Jim Rigby learned that a formal complaint had been filed against him that could ultimately cost him his standing in the Presbyterian Church, the minister's initial reaction was something along the lines of "Yahoo!"

The response might have left a pew of by-the-book Presbyterians reaching for their smelling salts, but Rigby, who is accused of conducting same-sex marriage ceremonies in violation of his denomination's rules, believes the church needs a wake-up call like this one to force an open discussion on homosexuality. The pastor of St. Andrew's Presbyterian Church in North Austin is a longtime ally of gay rights causes, and he says he's willing to put his frock on the line in this particular fight.

The complainant, Robert Brown, a UT freshman from Carrollton, filed the claim with the church's governing body on Sept. 13, five months after Rigby officiated over some 50 same-sex unions on the UT campus during a student-sponsored event on marriage equality. Brown is joined in his complaint by his hometown pastor, the Rev. Dr. Bill Park of Nor'kirk Presbyterian, and California attorney Paul Rolf Jensen, a staunch Presbyterian who is well versed in the church's Book of Order, represents the two.

Jensen is determined to uphold the long-held set of rules that bans the recognition of gays and lesbians in the church. The complaint also cites a 2003 incident in which Rigby ordained a "self-affirming, practicing, unrepentant homosexual" to the position of elder. At the time, Rigby had hoped the ordination of Suze Miller, a lesbian, would prompt Jensen to follow through on his promise of a complaint, but the attorney dropped the effort shortly after the dust had settled on that score.

This time, Rigby is optimistic that the new complaint will lead to a trial of sorts. "It's what needs to happen," he said. "I'm hoping I can get some sort of public hearing before my peers." That day may come, he said, if "the liberals" among the church leaders don't find any loopholes that could lead to the complaint's dismissal. Rigby, in fact, went out of his way to help Brown build an air-tight case against him and even provided the name and phone number of an attorney with a track record in these types of matters – Jensen.

Rigby said he met with Brown at Kerbey Lane Cafe, where the two discussed their differences, and while the two never came to an agreement, the pastor was struck by a sense of déjà vu. The younger man, Rigby said, reminded him of his own UT freshman days of trying to adjust in a strange new environment. It was a painful challenge for Rigby, having grown up in a sheltered household in Dallas. "I found him to be a very sincere young man – without a whole lot of life experiences," Rigby said of Brown.

The pastor counseled the student on how to draw up his complaint, and advised against citing specific couples that Rigby blessed on campus last April. Too risky, the pastor explained. A broad allegation would stand a better chance of moving the case forward. "I want to be on trial for conducting same-sex unions – period," Rigby explained. "I want to be able to say, 'show me in the scriptures where it's wrong.' Jesus never even talked about this."

As Jensen sees it, Rigby's actions are in direct violation of the church's constitution. In a statement, Jensen allowed that while he respects Rigby for having the courage of his convictions, the Austin minister "doesn't understand that by ... publicly attacking our church's historic Biblical stand, he is making war upon our church," Jensen said. "I intend to stop him."

In a similar case a year ago, Jensen successfully pushed for the expulsion of a Cincinnati minister. Rigby hopes for a different scenario. Meanwhile, he's saving a date in October to preside over yet another same-sex union. All told, he estimates he's conducted about 75 same-sex marriages in his 25 years as a preacher. "The UT event really helped my stats," he said.