A Lege Too Far

With Six Weeks To Go, the Question Looms: How Bad Can Things Get? 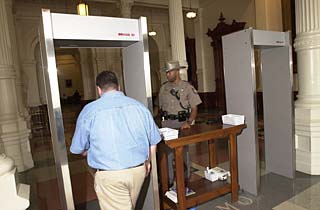 Welcome to the Texas State Capitol (Photo By John Anderson)

The most visible symbol of the new order down at the Capitol this year is neither the mortician's affability of House Speaker Tom Craddick nor the unearthly tanned visage of Lt. Gov. David Dewhurst. More grimly, it's the metal detectors, politely manned by Dept. of Public Safety troopers, now operational at all entrances into the Capitol building.

Before September 11, 2001, the Texas Capitol was as welcoming and accessible as a public park; troopers were on hand but at most times were hardly noticeable. Then came the orange barriers excluding all but official traffic, and the troopers began discreetly perusing handbags and briefcases. Now, since the official kickoff of Gulf War II, the troopers stand in readiness behind the metal detectors; each visitor fills a basket with change, keys, and trinkets and steps through the looking glass into a diminished democratic universe.

The war on terrorism is a shadow that falls obliquely on all of the public's business these days, and not just in the form of color-coded alerts and reflexive (or simply knee-jerk) endorsements of patriotism. At the federal level, the heady atmosphere of permanent warfare has made it easy for the Bush administration to fatten the military at the expense of everything else -- even including local homeland security -- and to increase the downward pressure on the states to sink or swim on their own. Since the economy is already staggering, state governments have a ready argument for austerity -- even if public spending is one of the most efficient sources of economic stimulus available in a recession.

Thus, the scene is set for the State of the Lege as of mid-April, where outnumbered progressive lawmakers have, even more than usual, been reduced to fighting rear-guard actions against elitist fiscal priorities and legislation to disempower ordinary citizens. A legislative session is inevitably back-loaded -- most of the substantive legislation, especially the budget, is not finally resolved until May. But the progress of the 78th has been atypically slow -- partly because there are so many freshmen, especially in the House, and partly because the new Republican leadership has decided to govern like the Romans, by legion. Matters normally resolved by committee compromise are instead destined to be fought out on the House floor.

Using their 88-61 House majority (down from 62 after the death of Kingsville Democrat Irma Rangel), the GOP had -- as of last week -- thus far ramrodded exactly two major bills over to the Senate: HB 4, the omnibus tort/medical malpractice reform to make the civil-justice system more amenable to corporate defendants, and HJR 3, its companion constitutional amendment that (if approved by the voters) would by fiat make the Lege's arbitrary caps on noneconomic damage awards invulnerable to challenge in the Texas courts. The Senate has volleyed one substantive bill: SB 14, which would "regulate" homeowners insurance rates by directing the insurance commissioner to keep an eye on them. (The industry lobby, howling in anguish at such tyranny, prefers Arlene Wohlgemuth's HB 3346, which would effectively declare the insurance market "free" by definition, King's X.)

That's not much to show for three months' work, but if things keep going the way they have been, it's just as well. (Indeed, a salutary byproduct of the prolonged House debate of tort reform is that less time was available to push bad bills.) On these pages, the Chronicle staff delivers a brief status report on things to come, in broad legislative categories: the budget, education, human rights, criminal justice, urban issues, the environment, and so on.

Call it an attempt to answer the looming question: How bad will it get?

By far the most important thing the 78th Legislature will do (or fail to do) this session is enact a budget. If you've been with us this far, you know that officially, the state projects a deficit in incoming revenues of $9.9 billion for 2004-2005 -- and that includes $1.8 billion just to get to the end of this biennium on Sept. 1. Another way to understand it is that Texas, already $1.8 billion in the hole for this year, will have for the next two years about $54 billion (in state funds) to spend on roughly $62 billion in currently acknowledged needs (allowing little or nothing for population growth, inflation, or already-long waiting lists in every category). In response, the House Appropriations Committee has drafted a budget of about $58 billion; the Senate Finance Committee is said to be considering the relatively munificent sum of $60 billion. Either of these figures remains several billion dollars below the actual financial needs of existing programs, from education to prisons.

Neither chamber has determined where the money will come from that it wants to spend that Texas officially doesn't have. The Republican leadership remains publicly committed to "no new taxes" (although with some waffling on expanding existing taxes where applicable). There are also proposals to close loopholes in existing corporate taxes -- but considering the lock-step House voting on tort reform, it's unlikely that the anti-tax fundamentalists will break ranks on that one.

A couple of sane taxation proposals have in fact been filed. The most comprehensive is HB 3437, by Rep. Eddie Rodriguez, D-Austin. In brief, the bill would create a state income tax -- deductible against federal taxes -- to be used for public education, thereby dramatically reducing both local property taxes and the state sales tax, and replacing both with a much more fair, flexible, and productive revenue system, under which most people, overall, would be taxed less. It is an eminently sensible proposal -- and under current political circumstances, it doesn't have a prayer of passage. Political circumstances do change -- but in the meantime, the Rodriguez bill serves a simple educational purpose: There are alternatives to gridlock, crisis, and stagnation.

Less ambitious but more pragmatic proposals include increases in the tobacco tax or other "sin" taxes. Several legislators, including Austin Democrat Elliott Naishtat (HB 267) have proposed raising the cigarette tax -- although each wants to dedicate the revenues (estimated at $1 billion or more) to something different: health care, child care, education, municipal needs. Like the Rainy Day Fund (insufficiently funded in boom times and now too small to be much use), these monies won't go that far. Thus far, the leadership insists it will make up the difference in "efficiencies" of one kind or another. By May those assurances should sound as hollow as they are, and some revenue alternatives will have to be in the mix. Last week, the comptroller joined the chorus recommending more gambling outlets -- neither a large nor consistent source of revenue, but politically more marketable than taxation (see "Naked City," p.15).

There has also been discussion of "securitizing" the $15 billion or so to be paid over many years by the tobacco companies to settle the state's lawsuit against them. That means selling off rights to that money for a quick, up-front payment instead. But the one-time amount would be pennies on the dollar and in any case would immediately go up in deficit smoke. A bad idea, but very tempting to the anti-taxers.

What the Cuts Still Mean

Since the GOP budget mavens are currently patting themselves on the back for "adding" new money to their original "zero-based" budget, it's worth recalling what the current, more "generous" budget proposals actually mean. Consider just some major programs in health and human services: More than 330,000 children (the poorest of the poor) would lose Medicaid coverage, as would 17,000 pregnant women in need of prenatal care, and more than 35,000 newborns. Nearly 40,000 elderly and disabled Texans would lose in-home services, with many forced into (more expensive) nursing-home care, and roughly 250,000 children in working families would lose their C.H.I.P. insurance.

Subtract similar "economies" from public schools, from universities, from child-protection services, from mental health care, from probation supervision, indeed from prisons. The social consequences are inevitable -- and that's what "fiscal conservatism" will look like.

A secondary but very real consequence of the same cuts is the direct hit they will inflict on the state's economy. Public health care, for example, is labor intensive, sustained by many low-income workers (e.g., home health care aides). In many small Texas towns, state spending for public services is a major prop of the local economy, let alone of community health. Similarly, as already seen in Austin, every school district is cutting personnel to meet cash-strapped budgets, and those laid-off workers add to the unemployment lines as well as to the social-service burdens. (As of last week, the cuts proposed for education amount to $2.6 billion.) That predicament is being conveniently blamed on "Robin Hood" -- but every district, "rich" or "poor," is in the same sinking boat, because state support for constitutionally mandated public education is fundamentally inadequate.

The Worst of the Rest

"I ask for water," sang the great blues poet Willie Dixon. "She brings me gasoline." Texas school superintendents can join that chorus, as the House Public Education Committee, chaired by Kent Grusendorf, R-Arlington, seems intent also on squeezing the system from the bottom, via a school-voucher program (HB 2465) approved last week. When the committee hasn't been finding ways to siphon public funds to private schools, it has been proposing to make it easier to suspend (HB 323) or dismiss teachers (HB 1152) at will or to exempt schools (HB 859) from the state standards and accountability system -- creating "home rule" or de facto charter schools, whose lamentable statewide record was described here last week by Michael May ("Who Will Vouch for the Charters?," April 4).

Grusendorf's most inflammatory proposal this session (HB 604) is simply to abolish the public school finance system -- a project that got a sudden boost last week when the Appropriations Committee restored some (tooth fairy) funds to HB 5, then an accompanying measure that would temporarily add school funding until 2005 -- after that, who knows?

It also needs emphasizing that many of the pending budget and education proposals are only slightly disguised attacks on the rights and living standards of teachers and public employees. There are also more frank assaults on all workers. HB 1896, for example, would require injured workers to use company-approved doctors. Another bill (HB 804) would overrule local attempts at living-wage laws -- "home rule" means what the Lege says it means, no more and no less.

Finally, on the environmental front, the Lege is still trying to figure out how to pay for federally mandated clean-air programs in the state's major cities -- you can guess where that project stands on the state (and now the federal) priority list. However, the skids appear greased for SB 824 (Bivins) and HB 1567 (West), which would enable not one but three nuke waste dumps in West Texas, welcoming not just the radioactive waste anticipated from the state's Texas/Vermont compact, but U.S. Dept. of Energy waste from all 50 states, making West Texas the glowing garbage dump of the continent. All for the benefit of Waste Control Specialists -- consistently a good deal higher on the legislative priority list.

How bad can things get? Over the next six weeks, stay tuned.