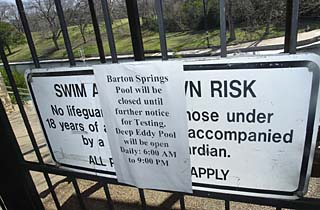 City Environmental Resource Manager Nancy McClintock calls last Thursday's community forum on the safety of Barton Springs Pool "a little healing." Last week, the Austin American-Statesman turned McClintock into a whipping post in its latest coverage of the crisis at the springs, accusing city staff in general, and McClintock in particular, of failing to hand over data to state and federal agencies. But the disputed data, which included three readings of levels of benzo(a)pyrene (BaP) in sediment by the pool, isn't the city's to hide in the first place -- it is produced by the U.S. Geological Survey.

After the daily reported in January that cancer-causing chemicals had reached levels that have led to Superfund cleanups in sites elsewhere in the nation, City Manager Toby Futrell closed the famous Austin landmark for 90 days while the state conducted a public health assessment. At Thursday night's forum at the Palmer Events Center, a panel of six experts agreed that the pool's water and sediment currently pose no health risks to the public -- partly because BaP and other polycyclic aromatic hydrocarbons (PAHs), while present in sediment, have never been recorded in the pool's water. Yet the pool will not reopen until the state's assessment is officially complete, Futrell said.

Moderated by experts from UT's M.D. Anderson Cancer Center, the forum featured panelists from the city, state, and federal agencies, and academia. Representing the city, McClintock showed charts that included the three BaP readings deemed "missing" by the daily. None of these readings appear in the USGS's database, from which the city loads its data (both local USGS representatives were out of town and weren't available for comment). The only one of the three readings that exceeded state standards for BaP was actually lower than a city-reported reading taken several days later, and taken together, the three missing readings actually lower the average BaP level found in the creek and springs.

"Why would I have hidden this data? It did not indicate anything other than what we've been saying," said McClintock. Since 1995, when she became division manager, developers and other critics have accused McClintock and her department of exaggerating the spring's declining water quality. "And now, suddenly, to be accused of trying to misrepresent and downplay a threat is mind-blowing."

McClintock wasn't the only panelist who had a bone to pick with the Statesman. The daily quoted a federal official describing the state's public health assessment as "quick and dirty," but Dr. John Villanacci, director of the Texas Dept. of Health's Environmental Epidemiology and Toxicology Division, says "What we're doing certainly isn't quick" -- his agency has already invested over 500 hours of staff time in the analysis. The Statesman insinuated that Villanacci arbitrarily narrowed the scope of the assessment, but Villanacci says the probe was already ahead of schedule by the time the federal Agency for Toxic Substances and Disease Registry received the city's petition to open up the investigation.

The city believes the PAHs detected in the sediment likely originate from sealants used on parking lots upstream. Those sealants, says Dr. Michael Honeycutt, senior toxicologist of the Texas Commission on Environmental Quality, are derived from recycled hazardous materials, and when it rains, PAHs flow off-site in runoff. Lab analysis requested by the city shows that sealant scrapings had "extremely high levels" of PAHs. (The same sealant has been used on the Statesman's own parking lot, and elevated PAH levels have been found in runoff from that lot into Town Lake.)

The Statesman has derided the city's focus on sealants, promoting instead its own theory that the pollution is coming from long-buried waste from a coal-gas plant, though the daily has uncovered no proof that such a waste dump ever existed. In its analysis of nine core samples from the hillside above Barton Creek -- the site of the Park Place Apartments, whose parking lot was treated with the suspect sealants --the city has detected high levels of PAHs only in the first six inches of soil, which runs counter to the buried-waste theory.

The USGS supports the city's sealant argument, as does Honeycutt at the TCEQ. "We sampled the heck out of that creek," said Honeycutt, estimating the 50 samples cost his agency around $100,000. The city had already assumed the sealant was the culprit by the time the state began sampling, he says, yet he believed as recently as a few months ago that perhaps a quarry was underneath the site. But neither the city nor the state found anything indicating coal-tar waste below the surface, he said. Honeycutt also compares the data the city supposedly withheld, and which the Statesman is focusing on, to "a penny when you've got $1,000." Other cities in Texas don't provide as much data as the city of Austin, he says -- in fact, Austin provides more information than what is required.

The daily also asserted in January that levels of arsenic in Barton Springs and Barton Creek have exceeded federal human-health criteria for water used for recreation, fishing, and drinking. That's incorrect, says the U.S. Environmental Protection Agency's Don Williams, who works in Superfund mitigation and who added that the Statesman misapplied Superfund criteria when it asserted the EPA declares a Superfund site if PAH levels exceed 1,000 parts per billion. McClintock says arsenic levels in the pool met federal Safe Drinking Water Act limits; as of Tuesday morning, she says, the Statesman has not answered the city's requests for information on the criteria it's using. One sample, taken in the 1990s, did approach the federal "concern level" for arsenic in drinking water in place at the time, but did not exceed it, she says. Many samples taken by the city and state have detected no arsenic at all, and none have shown levels above the federal limits.

The Statesman toxics crisis has, however, focused attention on if, and how, the city could better monitor and protect the springs. McClintock's department operates probably the most extensive water-quality monitoring program of any city in America -- but its mission is to identify threats to aquatic life (particularly the endangered Barton Springs salamander), not to swimmers in the pool. Though Villanacci says the city has been open with its data, he questions whether the salamander is an effective sentinel. "We do have standards for humans," he said. "But I'm not saying the city is at fault. The purpose of collecting data was never to evaluate it with respect to human health." City officials expect to tinker with their data-collection program; if Austin does begin using its data to review human-health risks, that responsibility would lie with the city/county health department, not McClintock's office.

At the forum, many people openly criticized the Statesman's coverage. When asked to defend his articles, reporter Kevin Carmody responded that his stories spoke for themselves. Many in the audience booed.