'Somebody's Got to Pay'

Revisiting the forensic evidence in the Stacey Stites murder trial 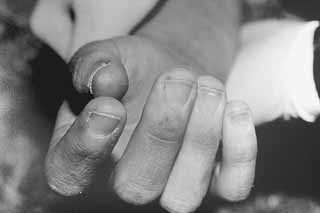 Crime scene photos showed Stacey Stites' fingernails had been roughly cut all the way to the quick, eliminating any evidence that might have been recovered from beneath them. Reed's first attorney questions whether Reed would know to remove evidence in this fashion. (Photo By Jana Birchum)

In the absence of a consistent or coherent defense, the prosecution's case against Rodney Reed became inexorable, particularly when it came to the medical evidence. Reed's attorneys argued that the lovers' final meeting, on Sunday night, accounted for the semen in Stites' body, but the prosecution contradicted this scenario with medical evidence collected by investigators and Travis County Medical Examiner Dr. Roberto Bayardo, who performed the autopsy on April 24, 1996. It was Bayardo's testimony that established for the court the horror of Stites' death. Bayardo told the jury that Stites had been murdered by strangulation with her braided leather belt, and that she was raped vaginally and anally.

Bayardo's testimony was additionally crucial to the prosecution because, to illustrate his argument, Tanner presented to the jury enlarged photos of Stites' body at autopsy -- including an 18-x-20 photo of Stites' anus -- over the vehement objections of the defense. "One of the things that probably cinched the case was that ... blow-up," Clay-Jackson said. "It was supposedly explanatory, but it was just the kind of picture where juries say, this is just so horrible -- somebody's got to pay."

Reed's defense never presented any expert medical testimony of its own, something Nueces County Medical Examiner Dr. Lloyd White said he finds odd. "Especially in a death penalty case, you would think they would," he said. Especially, he added, with a case as seemingly "atypical" as this one. At the request of the Chronicle, White agreed to review the autopsy findings, photos, and crime scene video, and render an informal opinion.

Above all, White said, he was disturbed by the condition in which Stites' body arrived at the medical examiner's office. Members of the DPS crime scene unit undressed Stites' body while she lay on a gurney on the side of the road where her body was discovered. "That's just not a proper environment for that," he said. If they are undressing her, and doing other things, he said, there is no way to ensure the integrity of the evidence, which is why it is best if a body is brought in to the medical examiner's office still clothed. "That's the standard," he said. "The reason is for the preservation of trace evidence [that would help determine cause of death]."

In Stites' case, there is also no confirmed record of the custody and transport of the body from the crime scene to the morgue. According to police reports, Stites' body was removed from the crime scene no later than 8:55pm on April 23, 1996. Yet, according to Travis County Medical Examiner's records, the body was not checked into the Austin office until 11pm that night -- at least two hours later. Normally that trip would take no longer than 45 minutes.

The lapse in time wouldn't be so significant, except that photos of the body taken at the crime scene do not coincide with photos taken at the ME's office the next day. Specifically, the photos show what appear to be numerous wounds on Stites' forehead, shoulders, and chest -- wounds not present in the crime scene photos, wounds that suggest that the body may have been, at least, mishandled during transport. And that calls into question the chain of custody of the body -- crucial in the legal process for establishing the purity of evidence -- and therefore could call into question any physical evidence found during the autopsy. White said the unexplained wounds indicate to him that the body was handled in an irregular fashion. "[It's as if] there was some sort of pre-autopsy there," he said. Yet Reed's attorneys never raised any questions about the apparent lapse in custody of the body nor the change in its condition.

Furthermore, White said he is uncomfortable with the idea of establishing time of death by using sperm evidence, which he called fairly unreliable. "I don't know that that is necessarily helpful," he said. "There may be rules of thumb, but they are never very precise. There have been documented cases where you can recognize the spermatozoa in bodies that have been dead for days." As for the anal dilation -- that too, White said, is not in itself evidence that Stites was sodomized at all, let alone at the time of her death. "I think that may be a mistake," he said. "The anus relaxes after death and it opens up, up to 11é2 inches in diameter." Bayardo testified that dilation is typical after death, but said it doesn't usually happen until days later. White disagrees. "Muscles relax," he said, "and the anus will dilate considerably." In short, in White's opinion, there may have been no evidence of rape at all -- yet that theory of the crime was central to the prosecution's case, and additional cause for capital charges.

White said that other evidence should have been fully investigated and apparently was not. For example, on the body were a number of what Bayardo called "burns" -- five in all -- some of which in his autopsy Bayardo considered "near third-degree" and White says are extremely odd. Bayardo testified that the burns could have been caused by Stites' body lying in the sun all day before she was found.

White disagrees. "Those are very peculiar marks, that have not been explained," he said. White said he believes the burns are post-mortem, but does not believe they could have been caused solely by exposure to the sun, least of all the most severe, found underneath Stites' left breast -- especially considering it was covered by the bra she was wearing.

White's reaction to the medical testimony coincides with the opinion of Reed's first attorney, Jimmy Brown, who said there was yet another piece of evidence that he never quite understood -- yet one that defense attorneys also never mentioned at trial. When Stites was found, her fingernails were cut to the quick, roughly and not filed. Indeed, Bayardo told investigators on April 24 that the nails were cut too closely to allow the removal of any trace evidence -- evidence that might have revealed or confirmed the identity of Stites' attacker.

Brown is not alone in his assessment. Interviewed about the possible significance of the cut fingernails, famed former FBI profiler Clinton Van Zandt said it's the kind of evidence that could be a valuable clue. "It doesn't jibe for [Reed] to do that," he said. "If you try to remove [evidence] from one place and not the other. That's exactly the issue."

But according to the court record, it was one more issue Reed's attorneys never raised.