The Short and Troubled History of Austin's Streetcar System 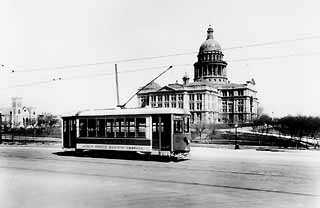 M.M. Shipe wasn't necessarily interested in streetcars; he was a developer. His Austin Rapid Transit Railway Company was one of the best ways to get potential home buyers to look at his new real estate gamble, a piece of land north of the city called Hyde Park. By early 1891, Shipe's money was running out. So was the time the city had allotted him to get his electric streetcar business running. But Shipe, who had moved to Austin a couple of years earlier from Kansas, managed to pull it off, and on the afternoon of Feb. 26, 1891, with just an hour and 44 minutes remaining on his contract with the city, his streetcars began running from Congress Avenue to Hyde Park. The interest was so great on that first day that overflow passengers had to be carried in mule-drawn streetcars. However, disaster was not far away. On April 20, the city was hit with heavy rains. The electric current for the streetcars went out, and several cars derailed after they ran over tracks covered with dirt and mud. The flood shut down Shipe's nascent business for two days. But a few weeks later, Shipe's business got a major boost. On May 9, the barn that housed the city's streetcar-pulling mules, located at 26th and Nueces, burned to the ground, killing more than 30 mules and destroying 16 cars. Within weeks the mule-drawn streetcar company, called the Austin City Railroad Company, merged with Shipe's company, and Austin shifted to electric streetcars for what appeared to be the final time. By the end of 1891, Shipe was out of the streetcar business and was devoting all his time to real estate. 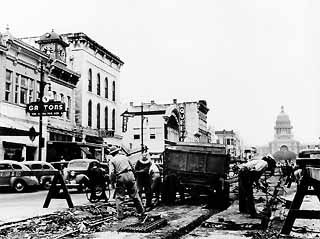 Shipe was one of many entrepreneurs to try his hand at the streetcar business in Austin. And while Shipe did well with his Hyde Park development, it appears most of the street car investors lost money. Indeed, the history of street rail businesses in Austin appears to be one of regular financial failure. Whether the street cars were mule-drawn or electric, their operators couldn't make their companies profitable over the long term. Fires, floods, the automobile, and, later, buses, all played parts in reducing the interest and ridership on the city's street rail system, which at its height sprawled over 23 miles of Central Austin neighborhoods. The rail lines connected Mansfield Dam on the west to First and Canadian streets on the east. The southern terminus was the Texas School for the Deaf. The northern end was Shipe's Hyde Park.

Throughout their six decades of operation in Austin, streetcar operators were continually trying to attract more riders. And their advertisements -- some of them more than 80 years old -- sound remarkably similar to those being used to promote mass transit today. In 1914, an ad appeared in the Austin Daily Statesman saying, "It is not practical or economical to keep a horse and carriage simply to go to towní and back. And walking is too fatiguing. The streetcar solves every problem of getting anywhere." 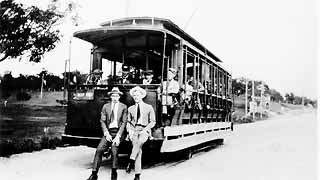 In 1936, the daily paper carried an ad from the Austin Street Railway Company, which was nearing economic ruin. The ad, titled "Adequate Transportation for a growing capital city," encouraged Austinites to ride the streetcars and discussed two problems familiar to Austinites today. Riding streetcars, it said, is not only "more economical, but helps to solve the very difficult and ever growing parking problem, which is intimately tied into our traffic problem."

Back to the Beginning

The first streetcars, pulled by teams of two or three mules, began running in January 1875, when Austin's population was only about 7,500. The mules ruled the rails until they were supplanted by Shipe's electric cars. But the mule-drawn cars had problems, too. On its inaugural journey, the first mule-drawn car -- operated by the Austin City Railroad Company, which was owned by John M. Swisher, a banker, came off the tracks and overturned. Swisher blamed the problems on the company that installed the rails, and a week or so later he tried again. The car derailed four more times before the problems were corrected. The company hauled its first paying passengers on Jan. 15, 1875.

The mules were phased out after the 1891 barn fire. Electric cars were faster and cleaner -- but they weren't necessarily profitable. From 1892 to 1902, the streetcars operated at a loss, according to the best single source on Austin's streetcars, an article written by A.T. Jackson that appeared in the journal Southwestern Historical Quarterly in 1954. In 1902, Jackson reports, a new company, the Austin Electric Railway Company, took over the faltering electric streetcar business started by Shipe and injected $200,000 into the venture. Nine years later, the company was sold again, this time to 28 investors from New England. The routes were expanded and the power plant upgraded, but the streetcars continued to struggle with poor revenues. By 1915, cash flow was declining, and dividends to the new stockholders were suspended. By 1919, the company was losing $1,300 per month. Shortly after that, it went into receivership.

The 1930s were scarcely better. In 1932, the streetcar business lost $62,500. By the late Thirties, business began improving a little, but not much. By 1936, the company itself was complaining about the lack of return on its investment. In an ad that ran that same year in the daily paper, the owners of the street car business said that "the expenses of the Company for many years exceeded the income and the necessity for constant improvements have made the investment of the owners anything but attractive from the standpoint of dividends."

Three years after that ad ran, the streetcars were running on just 17 miles of track, down from a peak of 23 miles. Bus routes in the city covered 29 miles, and it was becoming apparent that the city would soon quit using streetcars. In 1939, the City Council renewed its contract with Austin Transit (which succeeded the Austin Street Railway Co.), with the provision that all the streetcars be replaced by buses and that all streetcars cease operation within 140 days. The last day for Austin's streetcars came on February 7, 1940. By that June, most of the tracks had been torn up and paved over. The last tracks were removed in 1942, providing 50,000 pounds of steel for use in World War II.

On the last day of streetcar operations in 1940, Mayor Tom Miller told a host of dignitaries, including the son of M.M Shipe, that they were gathering to "witness the change from the old to the modern, the change from streetcars to buses." Then, with a phrase that light rail advocates may rally around, Miller predicted that Austin's bus system will "remain in operation until some other better means of transportation takes its place."