As stewards of one of the fastest-growing areas in the nation, Hays County officials in the past half decade took the raging bull of new development by the horns and went to work enacting some of the state's most progressive regulations to protect their rural lifestyle. They pushed the legal limits of their authority with subdivision rules that limit development density to protect well quantity and quality and ensure good roads. They embraced more recent rules that force developers to test for water availability before drilling wells, and they even embarked on discussions to provide incentives for rainwater collection systems. So with the history of these accomplishments in mind, why are many of the current Hays County stewards drawing the ire of their constituents? In the past year, County Judge Jim Powers -- the chief elected official for county government -- has been the point man in a campaign to silence opponents, or at the very least exclude them from any meaningful role in shaping the county's future. Many see it as a classic case of inexperience, since Powers and some of his peers are political neophytes who haven't had to deal with public attacks before. And the natural reaction to attack is counterattack for self-preservation, usually without any sincere communication with the enemy.

Such is the case with Powers and local loudmouth Erin Foster, a northern county resident who has led the charge against the Lower Colorado River Authority's water pipeline to Dripping Springs, as well as the county's transportation plan.

Foster, who chairs the grassroots-oriented Hays County Water Planning Partnership (HCWPP), doesn't step lightly. She continually makes the case that Powers has a poorly hidden agenda that favors big development and ignores the potential impact on residents. Since its formation last summer, the HCWPP has filed two lawsuits against the county, claiming Open Meetings Act violations, and has been a vocal opponent to the majority of county commissioners at every turn.

The volatile situation escalated last month when Powers and county attorneys fired back with threats of criminal prosecution of Foster for her actions. Additionally, they wrote letters of complaint to employers of local citizens and reporters who have taken on the county officials. To make matters worse, the judge and his allies have ganged up on the lone commissioner -- Susie Carter -- who openly questions the other commissioners' actions. In short, things have gotten nasty down in Hays County.

But what do these out-of-county political feuds have to do with Austin? A lot.

Regardless of the he-said, she-said rhetoric, the issues being debated are matters of serious concern. At stake are thousands of acres over the Edwards Aquifer that some consider ripe for development. Understandably, there is genuine fear that this rural treasure of Hill Country land might someday mirror the strip malls and commuter traffic that characterizes much of Austin and its northern, formerly rural neighbor, Williamson County.

All eyes seem to be on Hays County lately, since it still holds the potential to go one of two ways -- as either a model for dealing with rural growth or just another spoiled beauty relegated to pitiful nostalgia of the way things used to be. After all, even the best regulations for quality growth don't amount to beans if you're opening the floodgate and promoting quantity growth.

These Are the Days

Wimberley rancher and County Commissioner Bill Burnett's roots are steeped in county politics. He is the son and the grandson of a county judge. Public office may be in his blood, but not necessarily contentious politics. "When my father was judge, there wasn't a whole lot going on," he says. Hays County even 10 years ago was -- with the exception of San Marcos -- just a rural county where squabbles didn't surpass the usual fights for road maintenance between precincts. "The last two years, we've really seen the growth ... and people are going to figure out this is a great place to live," says Burnett, now nearing the end of his first term as commissioner. "Clearly, you're going to have growing pains."

Those pains include reproaches from longtime residents who see their rural dream homes being crowded into suburbia. Burnett says he tries to take the criticism, even being called a "crook or an idiot" in stride. "Getting sued and getting called bad names is part of the business, and if you can't handle it, get out of the business." But he also bristles at what he says are untruths making the rounds, particularly the one that set off a firestorm of allegations of secret meetings and backroom deal-making in Hays County. It all began last summer at one of this area's favorite institutions -- the Salt Lick Barbecue. The HCWPP filed a lawsuit against the county alleging that a quorum of commissioners -- Powers, Burnett, and Russ Molenaar -- attended a meeting at the restaurant and discussed policy and business, a violation of the Open Meetings Act. The event was sponsored by Newhall Land and Farm Company of California, which had a proposal to build 14,000 homes on the Rutherford Ranch over portions of the Edwards Aquifer recharge zone. 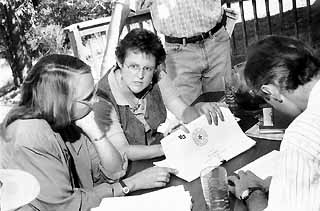 Burnett has been accused of taking an active role at the Salt Lick meeting by making a presentation on growth and the county's future. "That's a total lie," he says, noting that he spent the evening hanging out with the sheriff and drinking beer. A district judge dismissed the lawsuit, but the HCWPP is appealing the ruling. Regardless of whether the three officials did any county business, the appearance of impropriety was enough to kick-start the formation of the HCWPP, which saw a connection between the Newhall plan and the proposed LCRA water pipeline to Dripping Springs. The group began actively fighting the pipeline and other plans they say are paving the way for large-scale development.

The lawsuit also had the effect of polarizing county residents, since Powers seemed to take the attack personally and subsequently deemed anyone connected with the HCWPP persona non grata in his court or in any other public discussions. HCWPP members were excluded from an oversight committee designed to plan for the LCRA pipeline and a committee to plan for future transportation. Foster says she was told by more than one county official, "No planning partnership member will ever serve on any county committee." She says the county's attorney, Jacqueline Cullom Murphy, eventually even told her, "You are not to talk to anyone at the county."

The HCWPP succeeded in stopping a transportation plan for roads into the year 2025 that included what amounted to an extension of MoPac to San Marcos and several new four-lane roads over the aquifer zones. Their action awoke the slumbering residents of Wimberley, who also objected to several of the proposed roads and protested in droves at a public meeting to discuss the plan. Faced with an onslaught on all sides, the Commissioners Court formed a blue ribbon Committee to make recommendations for the plan, which eventually would be submitted to the Capital Metropolitan Planning Organization (CAMPO) as official input on what roads should be funded in the future. The 19-member committee came back with recommendations for no major roads over the aquifer zones, no MoPac extension, and several other changes. The Commissioners Court seemed to adopt the recommendations in toto, with a minor change in a road designation. But the plan that showed up on CAMPO's doorstep last month failed to include the committee's "overlay" showing where the roads over the aquifer zones should remain minor neighborhood streets, and the alignment of a proposed road into Rutherford Ranch shifted west, deeper into the aquifer's recharge zone.

While dumbfounded committee members wondered how the changes were made, the HCWPP came out with a blatant accusation. They claim that Burnett made the changes illegally with county staff before giving the plan to CAMPO, where he serves as a Political Advisory Committee member. The HCWPP troops once again filed a lawsuit claiming a violation of the Open Meetings Act, and Foster pushed for criminal charges to be filed against Burnett and others. (Burnett denies the allegations, but won't comment on them specifically due to the lawsuit.) The court met to correct the lack of the overlay and another change, but left the westward shift in the alignment without much explanation of how it ended up that way. And once again, Foster's attacks led to even more personal indignation from Judge Powers.

Like Burnett, Jim Powers is also in his first term after replacing two-term judge Eddie Ethridge in 1998. The 42-year-old Dripping Springs area resident owns a couple of Popeye's fried chicken franchises and is active in the local Baptist church. In addition to the Salt Lick brouhaha and his refusal to address the confusion over the road plan, say HCWPP members and others, the judge has made several questionable actions, including: