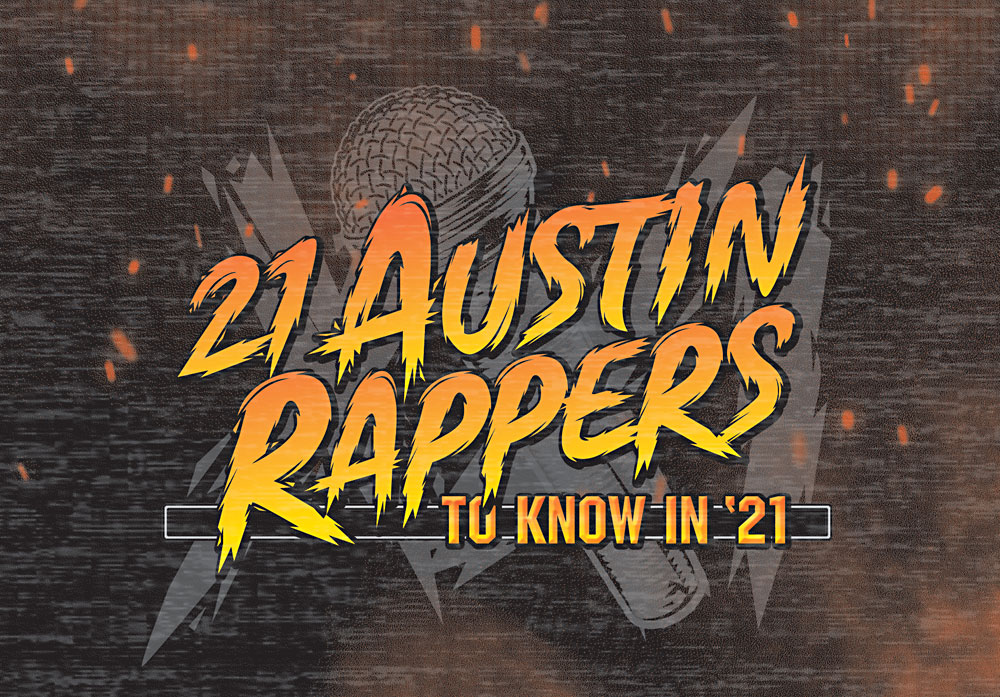 The Austin hip-hop scene's collective march toward widespread recognition is taking longer than Avatar 2 (revisit "Hip-Hop on the Verge," Music, Jan. 16, 2015). A constantly growing pool of resilient local rappers spanning a multitude of sounds finally appears primed to garner the genre its proper due in a city full of gatekeeping laggards.

"When I was coming up, our events for Black people were like Texas Relays," explains the MC-turned-deejay during a phone interview. "All the clubs [were] popping for us. We had the track meet, the mall. That was our South by Southwest, which wasn't something we really went to.

"You hear stories back in those days of local artists performing at South by Southwest in smaller venues, but they were like hotel ballrooms in the outskirts of the city. So basically, there wasn't that much coverage of it happening."

"The difference between then and now is that because of the rise of the internet, there's more coverage," continues Jones. "It's not hidden in a way, nor is it Austin's best kept secret. There are artists popping on [streaming services and social media]. These are tools that the artists back then didn't have, unfortunately."

As evidenced by the amount of rap in the Chronicle's "New Austin Music Worth Your Bandwidth This Week" over the past year, a list of local rappers could easily accommodate 50 or even 75 artists. Yet we wanted to present a reintroduction of sorts to the elite tier of Austin MCs as venues start reopening this summer. Our criteria dictated that artists must live in the Greater Austin metropolitan area and have released at least one song since June 1, 2020. 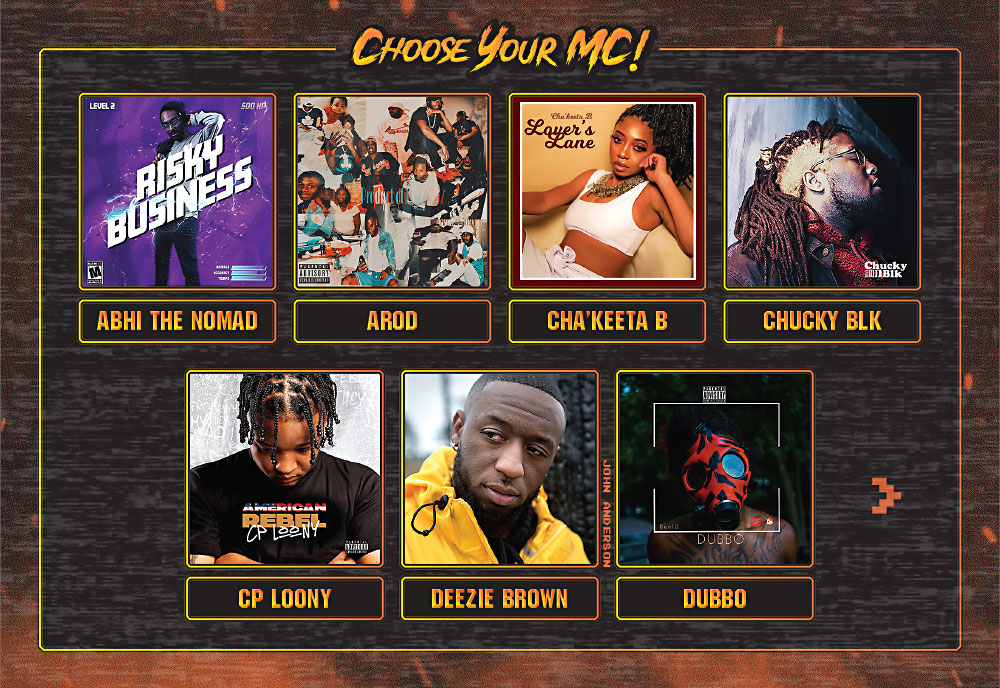 
The well-traveled native of Madras, India, raps, produces, and sings to the tune of over 1 million listeners on Spotify. Yet he still feels slightly underrated. Social media clips lovably vary from performing on Bernie Sanders' Twitch stream to covering "Just the Two of Us" by Grover Washington Jr. and Bill Withers.


No, J.Lo's ex didn't leave Sunday Night Baseball to become a rapper. Eastside newcomer Roderick Brittenham exudes the heart of a lion on his first two projects. The second of those tapes, Product of 1992, contains a healthy batch of heartfelt sentiments ushered over pitched-up soul samples. Why start in his 28th year? "September 7th" explains a passionate desire to make his son proud.

Recommendations: 2 Incomparable and "Pull Up"


Cha'keeta B moved to 78723 from Dallas at the age of 2. She can bewitch with sensual tunes ("Pull Up") or lead with powerful rhyme ("Lost Girls Poem") thanks to a ferocious flow and poetic pen. Whatever you want, she's got it.


The above album title's directness falls quite opposite from Weezer's tactic of turning nearly half its discography into the color wheel. A proficient poet of spoken word, the McCallum High alum uses unorthodox technique to strike down everything wrong with America's nightmarish indecency.


Colony Park Loony employs Atlanta and Chicago-influenced melodicism to fortify strong-hearted lyrics. The rebellious, self-proclaimed "Voice of the Struggle" flips his own hardships into fuel for those he loves, but he also struts here and there too ("Push Start"). 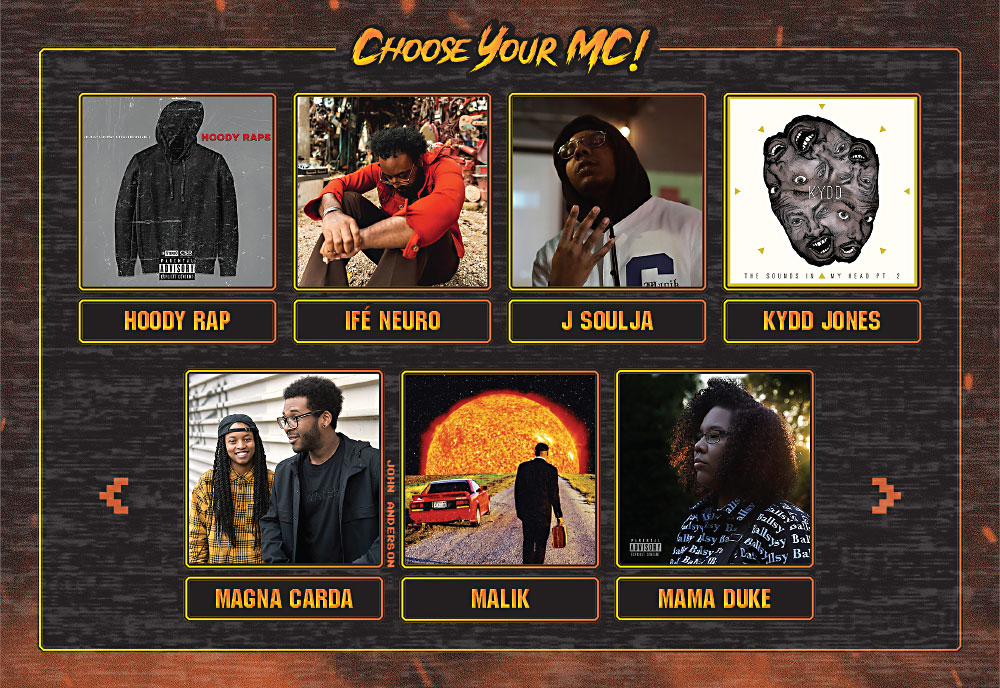 
Ifé Neuro cuts deep over rich, soulful production with incisive flow and meaningful bars. The underrated Greenville, S.C., native feels like a real gem in a scene full of them.

Recommendations: From the Soul and This Ain't Shxt: Deluxe Version


Impassioned Eastside torch raiser J Soulja moves like an OG despite not hitting 30 yet. Selfless business moves such as the Smoke Out ATX concert series and its attendant Behind the Song ATX Live social media stream allow local artists to share their stories. He designs for his peers, too.

Recommendations: "Goblin," "James Baldwin," and The Sounds in My Head Pt. 2


Don't call this Westwood High alum a "rising star." Signing his first record deal at 15 with Sony, the veteran of almost two decades recently rhymes in a silky smooth fashion with subtle threads of harmonic precision. "Goblin" observes the aftermath of George Floyd's murder from the Black perspective.


The genre-fusing outfit, populated by main producer Dougie Do and rapper Megz Kelli, reigns as three-time victors of top hip-hop honors in the Austin Music Awards. Latest single "Propaganda," a co-production with budding sensation Malik, sees Megz running rampant over a riveting beat outside their usual R&B and soulful terrains.


Common, Jhené Aiko, and, of course, Kanye West, highlight a list of high-profile producer No I.D.'s most notable collaborators. Not bad company for ARTium Recordings signee Malik, who released his first album on the Chicagoan's label last June. The Leander High graduate already owns a Grammy certificate for production work on Ariana Grande's 2018 album Sweet­ener, yet his ceiling feels far greater than that.


Mama Duke gloriously talks shit on records and follows up with captivating live performances. The native of ant-sized Palacios loves to toast to the empty insults hurled by oppressors. "Did this shit with three whammys, to make it up I need three Grammys/ 'Cause I'm Black, female, and gay, and somehow still found a way," she justly celebrates on "Found a Way." 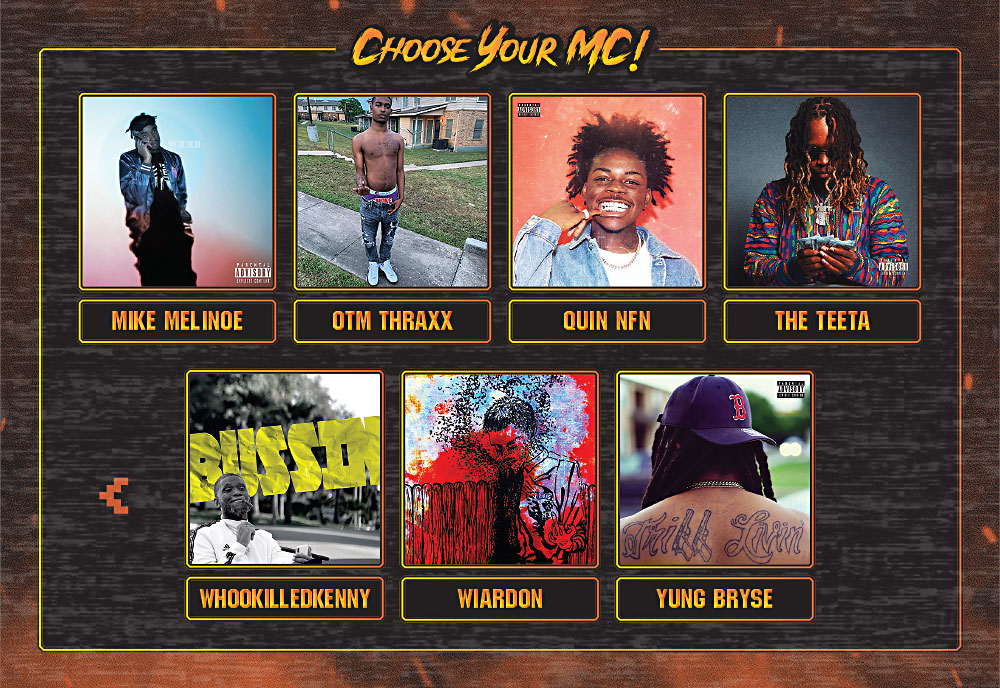 
Detroit-hardened Mike Melinoe glows with a truly unique style. On Nov. 2019 full-length Clajidu, he ships boxes of wackily sewn goods only he can deliver properly, yet will seamlessly switch up on a warm track like 2020 single "Affection." He's literally a painter of abstract quality – with artwork for sale.


OTM Thraxx scored at will as a point guard for Reagan High School before transitioning to his current position as a trap crooner. He started taking rap seriously last year, with nearly 15 singles as proof, and primarily uses Auto-Tune to convey pain.


The inclusion of Austin hip-hop's 20-year-old golden child on this list mirrors the annual selection of LeBron James to the NBA All-Star Game – a mere formality. Traditionalists might dislike his lyrical content and/or borderline consistency, but he's sustained a serious following thanks to rap ready-made for most genre playlists. Is he the chosen one? Thankfully, he's not leading the 2007 Cleveland Cavaliers.

Recommendations: "Activated," The Quarantine, and The Seventh Seal (w/ Willo)


There's few more synonymous with Austin hip-hop than this decade-plus veteran from the two-four. He rhymes with deceptive guile over bass-heavy beats, a style he terms "pretty boy trap." The Seventh Seal, a stellar 2020 EP with Dallas artist Willo, proves he can "rap rap" outside of [expletive one] and [expletive two] when he desires.


Once touted as a leader of ATX rap's new school, WhooKilledKenny disappeared for a while. Released in February, "Finna Charge" signaled his return. The comeback, triumphantly clocking over 1.2 million Spotify streams, oozes charisma and a swagger-drenched hook.

Recommendations: Probably Somewhere Ducked Off and X on My Back


There's a reason Pitchfork gave the hypnotic "Ginobili" a glance two years ago. This brash '02 native, still just 18, started off producing for artists nationwide before deciding to focus on rapping. That selective ear for beats keeps his content fresh from project to project. For example, vibrant melodies boosted by rambunctious 808s populate X on My Back, while Kame Up Off a Lick contains short doses of chipmunk soul.


WELCOME TO ... THE NEW AUSTIN

"I don't want Austin to be like St. Louis. I don't want us to be a [Nelly] one-off," states Confucius Jones. "I don't want one person to get on and everybody thinks that's the sound we can't get away from. It took Houston years to get away from that chopped and screwed sound."

Few ATX rappers sound similar, yet they echo shared frustration birthed out of disrespect. Jones understands their viewpoint, agrees that a predominantly white city lacks desire for rap to succeed, and acknowledges that his own 4-year-old radio show with Aaron "Fresh" Knight was conceived out of frustration. The Reagan High alum surprisingly still expresses ample positivity about the scene's prospects going forward.

He likens Austin hip-hop's position to that of the Atlanta scene some 30 years ago.

"There's been a lot of moments over the years that we all felt were important or going to take it to the next level and some of them kind of did, but the scene didn't have the infrastructure to maintain it," explains the lifelong Austinite. "I feel like that infrastructure is now slowly being put together. When you're living in history, you don't see it until after the fact. If you [talked] to a vast majority of Atlanta artists in the late Eighties, early Nineties, you probably couldn't tell [them], 'Hey bro, in 30 years this is going to be the biggest city in music.'

"Because at that time, they're probably looking at it like, 'Yeah, you're saying that, but we have just local buzz. Nationally we're not getting a lot of attention.' We're living in [a lot of] that same period in Austin." – D.U.


Throat-destroying yells from metal greet traces of the late XXXTentacion over neuron-rattling instrumentals containing the bounce of tricked-out lowriders.


Jøxx owns one of Austin's highest commercial ceilings thanks to a natural penchant for melody. He's probably one shameless TikTok trend and a couple of decent DSP placements away from gathering real steam. His third ever song release, "Opp Undercover," accrued over 125,000 SoundCloud streams out of the blue last year.


What better way to commemorate a 19th birthday occurring at a crossroads of personal uncertainty, large aspirations, and a harrowing pandemic than penning a debut EP? Khxnid! took just five days to complete last August.

Two-four native Young E puts forth a commendable effort on his boldly branded debut. He rhymes with hunger and touches on topics ranging from racial inequality ("White Amerikkka") to sorrowful mourning over his late grandmother ("Grandmas Baby").


5 RECENT CIPHERS TO CONSIDER FROM OTHER ARTISTS

Houston trill puffed out by a laid back MC.

A newfound perspective on life enhances the proficient sing-rap style of the Maryland native on his best project yet.

Flowers For the Living (February 2021)

The philanthropic three-time winners of Band of the Year at the Austin Music Awards released their first album of primarily original content in over a decade.

IDK, That's Perfect?! Podcast
Epic sitdown interviews with contemporary Austin hip-hop artists where a variety of topics are discussed and it feels like hearing friends talk over drinks.

Bevo Beats: Hip-Hop on the 40 Acres
Addie Costello of The Daily Texan hosts a podcast (SoundCloud, Spotify) exploring Austin hip-hop and, in particular, its relationship to the University of Texas culture.

This story has been updated since first publication to correct the spelling of Big Kee's name, and to clarify Deezie Brown's current record label. The Chronicle regrets the error.