Band of the Year: Black Pumas

Musician of the Year: Gina Chavez

Songwriter of the Year: David Ramirez

Album of the Year: David Ramirez, My Love Is a Hurricane

Video of the Year: Caroline Rose, "Feel the Way I Want"

Musician Who Went Above & Beyond: Jonathan "Chaka" Mahone

The Watters triumph in chemistry, not solely between wife-husband core Jenna and Daniel Watters, but in building a tight sound that pushes the most potential out of each part. Settled into their fifth year in Austin, the couple assembles powerhouse players for album three, including J.J. Johnson's incomparable percussion and keywork from Trevor Nealon (Band of Heathens) and Anthony Farrell (Greyhounds). Jenna's soulful voice drives the band, channeling Lake Street Dive in "Deja Vu" and the title track, and imbued with a Southern flair and Colorado indie jam vibe. As on 2018's eponymous LP, horns and brass fluff a big bed of the sound, bursting forth on "Fire Inside" and highlighting sax showdown "Wash Away." Ephraim Owens' trumpet joins torching combo "Out of the Darkness" and "Let Me Know," while Daniel's guitar cuts loose "Final Day" and "Learning How to Die." Warren Hood's swooning strings melt closer "Go Home." Intuition excels in harnessing an expansive yet expertly honed whole to match Jenna's versatile vocals.  – Doug Freeman

Pleasure Venom's latest turns out one of Audrey Campbell's most exciting performances. Delivering intense staccato yips over crunchy hardcore punk, she's initially reminiscent of early Bad Brains. Later, when "Fascist" downshifts into a crawling, reverberating garage breakdown, the Austin frontwoman begins a burning intonation of the rage mushrooming inside her. Climax finally arrives in a series of visceral punk squalls and hook: "Feel it in your spine! Owwww! Owww! Whaaaaaaaaaa!" Artwork for the standalone single from Austin's Wolfshield Records depicts f-o-r-m-e-r President Donald Trump being dragged out of the Oval Office by federal agents, putter and golf ball strewn on the floor. That's a welcome sight, but "Fascist" ultimately rallies the internal anthem of an artist being pushed to a breaking point by a racist, unjust, ruling class system.  – Kevin Curtin

Brace yerself for eight minutes of the most ear-blistering hardcore to come out from under Bat City since the Offenders. In a little over a year, the McCallum High students behind the four releases credited to User Unauthorized have established themselves as one of the few socially conscious voices in latter day Austin punk. Production by sonic seer Stuart Sikes and Riverboat Gambler Ian MacDougall lends a blasting clarity to politically savvy scream bombs like "A.P.D." and "Watch Them Fall." Nonbinary singer/bassist Sage's gritty bawl straddles an articulate roar from brothers Rooster on drums and Johnny Cash on guitar. (Yes, those are the siblings' real names.) Lead guitarist Isabella's six-string logic is some of the most inventive and intriguing since Fear's Philo Cramer, while Zach Blair from Rise Against guests on "Stomp." Thrashcore punk anger hasn't sounded this righteous and articulate since Black Flag's Damaged. The future looks bright.  – Tim Stegall

Although not her debut release, Elsa Cross' upcoming album Kicking Love resets the local singer-songwriter. For her first recordings since 2014, she tapped local drum deity Hunt Sales to produce, giving the LP a heavy edge even for her notoriously gritty roots punk sound. Wrapped a year ago, the first singles for a projected May release surge with as much insight as bite. "Just So You Know" amputates bad love with a touch of Erika Wennerstrom in Cross' commanding vocals. Meanwhile, the title track roars in heavy guitar and thundering percussion, its author kicking away the past to emerge renewed and ready to rage.  – Doug Freeman

Jeremy Clark takes exactly five minutes to deliver a fiery reflection on America's problematic ways. Three-song EP Robocalypse, released Jan. 1, takes aim at the social injustices suffered by Black people nationwide. "How the government shut down?/ They never was runnin'" opens the succinct project via "Prologue" before offering, "My pops was murdered/ So who can I trust?/ Imma find the man that did it/ We gone have a discussion ... ." Bot's tone becomes increasingly abrasive on "The Warz Outside." A deceptively peaceful flute briefly blows after the 26-year-old MC unloads a round from his drum: "Masked up/ Huntin' for any opposite skin color/ Strapped up/ Sons of bitches keep trying to kill us/ Act up/ This time we gone make these niggas feel us." Third and final song, the scathing "R7," sends a warning to corrupt Florida lawmakers in response to the murder of Black teenager Trayvon Martin in 2012 before letting Governor Abbott know that he, too, cannot escape his wrath.  – Derek Udensi

Despite the pandemic, Monks Jazz Club is the venue that never sleeps, continuing to livestream shows weekly from East Austin Piano Shop. Sunday, Jan. 24, platforms the first gig for the Tommy Howard SAtown Quintet since the 'rona began its assault on humanity (although the bandleader hosted his regular quartet at Monks in July). Joined by fellow San Antonio native Adrian Ruiz on trumpet and former Jazz at Lincoln Center Orchestra trombone monster Andre Hayward, the Church on Monday guitarist lays down serious grooves with his star hornmen, including some from his 2017 solo album Storybook. Tuesday, Jan. 26, features the return of tenor sax firebrand Jessica Mortensen, first seen at Monks in October. Pursuing a degree in cell and molecular biology, the Bay Area-bred former classical pianist is a part of UT-Austin's jazz program and plays with the Blondell Quintet and the Boss Street Brass Band. She also leads her own quintet, swinging so deftly in a hard bop style she belies her tender years. Mortensen's stream also directly benefits the Austin Jazz Society's Project Safety Net.  – Michael Toland

William Harries Graham creates a marvel in six tracks, his EP follow-up to excellent 2019 LP Jakes shifting gears and focus. Whereas that album struck out confidently, St. Claire revels in a more atmospheric ambiguity, captured as much in the ambient tone as sentiment. Graham sinks in a sense of disorientation and wandering, musing through love from a distance as his voice muffles subdued and crooked with a worn down want and confusion. Exploring the sounds of emotions like early Bon Iver, he moves through the infatuated first look of "Lady in White," lingering traces of doubt on "Fingerprints," and hard tailspin of "Confidant." In the hauntingly beautiful "Silent Film," he notes, "To remember how to fall in love, you have to cry from time to time."  – Doug Freeman

"Willie is wasted on Americana bozos," texted Walker Lukens back in August when discussing Nelson's merits as a songwriter and vocalist. Five weeks later, he released a nine-song cover album called Red Headed Strangers that, in addition to raising considerable funds for the Health Alliance for Austin Musicians, prompted recontextualization of country music's reigning paterfamilias. Boldly, the inventive reinterpretations contain not a lick of guitar, favoring synthesizers, piano, and drum machines instead, yet capturing the spirit of Willie better than most. He takes 1975's "Can I Sleep in Your Arms?" out of the bar and into a vacuum, placing all focus on the yearning vocal meditation. Later, Lukens and partner/bandmate Mickey Rose update the Willie & Waylon duet "I Can Get Off on You" into a bouncy pop song in which subtle yet significant adjustments on the original phrasing works to splendid effect. That's a very Willie exercise, like on his recent interpretations of Sinatra, except while Nelson exists naturally behind-the-beat, Lukens and Rose give it a punchy presence. Their minimalistic rethinking of "Always on my Mind" attains Willie Nelson entitlement – heavy, but lighter than air.  – Kevin Curtin 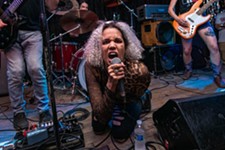