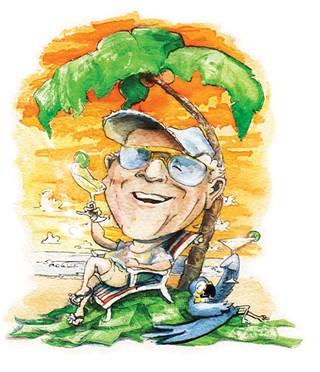 Ryan White begins his new biography of Jimmy Buffett with the transcript of a 2012 hearing before the Nevada Gaming Control Board.

"When you wrote that song, did you have any idea what it would become?" asks a board member.

"It's been a pretty good song," Buffett casually responds. "No, it was written in five minutes about a hot day in Austin, Texas, with a margarita and a beautiful woman. I finished it in Key West. I had no idea."

Buffett began composing "Margaritaville" one afternoon in 1976 after visiting a Mexican restaurant on Anderson Lane and then retreating to a friend's house in North­west Hills. When he landed back in Key West, he polished off the lead single to his 1977 album Changes in Latitudes, Changes in Attitudes, an unexpected hit for the largely unknown singer that peaked at No. 8 on Billboard charts and notched the 14th most popular song of the year.

The tune itself didn't even boast the Mississippi-born, Alabama-reared troubadour's best songwriting. It lacks the narrative spell of Buffett's "A Pirate Looks at Forty" or "Havana Daydreamin'," and the emotional tug of "Come Monday," his only previous Top 40 showing. Even as escapist fantasy, "Margaritaville" reads dubiously, a cold beverage covering up relationship regret and disgust at tourists ruining his personal paradise.

Even so, "Margaritaville" casts an undeniably inviting aesthetic. Inside a gentle commingling of steel drums, marimba, and electric piano, Buffett captures an immensely relatable vibe that gave rise to a musical cult second only to the Grateful Dead's. Riding a style dubbed "Gulf & Western," the song's crisp Nashville backing and tropical breeziness seeped country roots into urban suburbs previously untouched by the genre. Today, "Parrotheads" rival so-called Deadheads for the crown of fan clubs transcending their soundtrack.

The literal value of "Margaritaville," however, resides in a watershed 1983 trademark dispute and resolution.

When restaurant chain Chi-Chi's attempted to trademark "Margaritaville" as a drink special, Buffett filed suit. Although a song title cannot be trademarked, the singer's lawyers argued the name was synonymous with his. The restaurant responded that, "If a nexus exists between songs and restaurants, Opposer could claim an equal nexus between songs and the tangible items of the universe."

Whether or not Chi-Chi's defensive legal quip inadvertently inspired a billion-dollar enterprise, by the time the court ruled in favor of the musician, he'd branded Margaritaville across as many assets as possible. Buffett and Margaritaville were now synonymous in the eyes of the law.

Margaritaville Holdings, owned solely by Buffett and his business partner John Cohlan, now umbrellas everything from branded casinos, restaurants, and resorts across the world to a jewelry line and merchandise of nearly everything imaginable. Earlier this year, the company announced plans for "Latitude Margaritaville," retirement communities for Parrotheads "55 or better." Mean­while, their Landshark Lager and Margarita­ville Spirits continue to grow in market share, contributing to Margaritaville Holdings raking in $1.5 billion last year.

For his part, Buffett ranked No. 13 on Forbes' 2016 list of wealthiest American celebrities, with a net worth of $550 million. Other musicians rank higher (Sean Combs, Jay-Z, and Dr. Dre), but none with success stories built upon a single song.

Austin's Jerry Jeff Walker first introduced Jimmy Buffett to Key West in 1971. The latter was on the run from Nashville, recovering from his flopped first album, Down to Earth, and a recent split from his first wife. Walker had royalties to burn after the success of 1968 hit "Mr. Bojangles," so he hosted his protégé there, and in doing so fed right into his friend's familial seafaring background – fostering a Caribbean awakening that changed the course of Buffett's life.

Moreover, as Walker settled into the progressive country scene of Texas in the early Seventies, he connected Buffett to the burgeoning alternative to Music City.

"Everything was adventurous enough in the Seventies that Austin was an obvious second home to [Buffett], at least spiritually," offers Ryan White. "Both Austin and Key West had a lot of that same outlaw spirit in common, but the difference was that Austin had clubs, and proximity to Houston and Dallas, so you could play around and make a living. He did well enough in Texas to be able to go all over."

If not exactly a fixture, Buffett at least became a familiar fellow traveler among local songwriters. He honed his solo act at Castle Creek with performances relying as much on a definitively Southern raconteur approach to stage patter as his songs themselves. During a multiple-night run at the seminal Lavaca Street listening room, Buffett also acquired the first piece of his Coral Reefer Band when Roger Bartlett convinced him he needed a lead guitarist.

"He came from the singer-songwriter background where he had the onstage rap going that was so common to those guys, and of course a great sense of humor and storytelling ability that was always entertaining," attests veteran Austin country purveyor Gary P. Nunn, whose Lost Gonzo Band helped define the cosmic cowboy movement while backing Walker and Michael Martin Murphey. "Jimmy was just always the nicest guy and so friendly and easygoing. It was the same vibe, just having a good time and celebrating life and enjoying ourselves, but there are apparently a lot more Parrotheads than there are cosmic cowboys."

Buffett found a common ethos in the local roots scene, as well as songs he would make his own. He recorded Willis Alan Ramsey's "Ballad of Spider John" and Keith Sykes' "The Coast of Marseille," with the latter eventually moving to Key West and joining the Coral Reefer Band. Buffett also appeared at Willie Nelson's inaugural 4th of July Picnic in 1974 at Texas World Speedway.

"Buffett wasn't really country," admits local genre pioneer Bob Livingston. "Jerry Jeff and Murphey were both folkies, but what made them folkies was the fact that Herb Steiner played steel guitar with us. Buffett was on the fringes of that. He was a little more mellow, certainly more than Jerry Jeff. He really had that island feel.

"Jerry Jeff would go against the grain at any cost, but Buffett just made his own grain."

"Austin paid attention because they paid attention to interesting things, and Jimmy was doing interesting songs," asserts White. "He fit in. He's always had an ability to fit in with whomever he's around. That speaks to his business success too, because he can fit into a room. He's as comfortable with barflies as he is business suits. He's always been able to do that."

In securing trademark to the name, its composer took the song from a mere copyright to a multinational empire. Everything's connected in Buffettland. Characters from his songs re-emerge in his novels. A new musical, Escape to Margaritaville, landing in Houston this October, weaves its narrative through a collection of his hits.

Equally notable is expansion beyond that finite body of work. In 1998, Buffett launched Radio Margaritaville, which broadcast his tunes and live shows online, as well as an expansive array of artists that fell into his general aesthetic, a thread running from Bob Marley to the Zac Brown Band. Headquartered in Austin, the station got picked up by SiriusXM and Dish Network. Following suit, the digital arm of Margaritaville, already a powerhouse in fan data mining and engagement, is developing content including mobile games and its own video channel.

"Really, the closest analogy I've come up with is Star Wars, which also came out in 1977," says White. "Just the way there was this original thing that's expanded to where everything has become part of this universe. Radio Margaritaville came out of an artist taking advantage of the internet when the rest of the industry was still focused on selling CDs."

Unsurprisingly, other artists have begun to follow the script. Not that branding and merchandising is in any way new to music, of course. From Fab Four lunch boxes to Dolly Parton's Dollywood, enterprising artists capitalize on their brands. Willie Nelson's entrepreneurial efforts, from biodiesel to weed, encompass a cultivated aesthetic. Dr. Dre's cut of the $3 billion acquisition of Beats by Apple netted him the largest single-year earnings by any living musician, according to Forbes.

As such, Sammy Hagar's Cabo Wabo brand may be the most analogous to Buffett's Margaritaville success. The onetime Van Halen frontman sold his tequila company, named after his 1988 song, to Gruppo Campari for $91 million. He retains the branding for his chain of Cabo Wabo bars, and last year announced a new liquor line.

Likewise, country star Kenny Chesney serves as Buffett's closest genre and business acolyte. Look no further than the former's brand of Blue Chair Bay Rum and the growing following for his No Shoes Nation – complete with No Shoes Radio. According to Forbes, Chesney now ranks as the second highest earner in country music behind only Garth Brooks. If 1990s Nashville got overrun by pop crossovers "gone country," then the past decade has been characterized by country artists gone fishing.

Savvy artists, from hip-hop to country, are today as keenly aware of their brand as their band, and the opportunities to merchandise it. That's a decidedly fine line for artists to tread, but also increasingly a reality they can't afford to ignore. Had Jerry Jeff Walker marketed his own brand of sangria wine and made Terlingua a destination experience, cosmic cowboys might be as ubiquitous as Parrotheads.

A version of this article appeared in print on July 21, 2017 with the headline: Defying Gravity 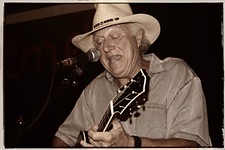 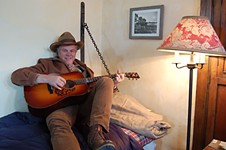