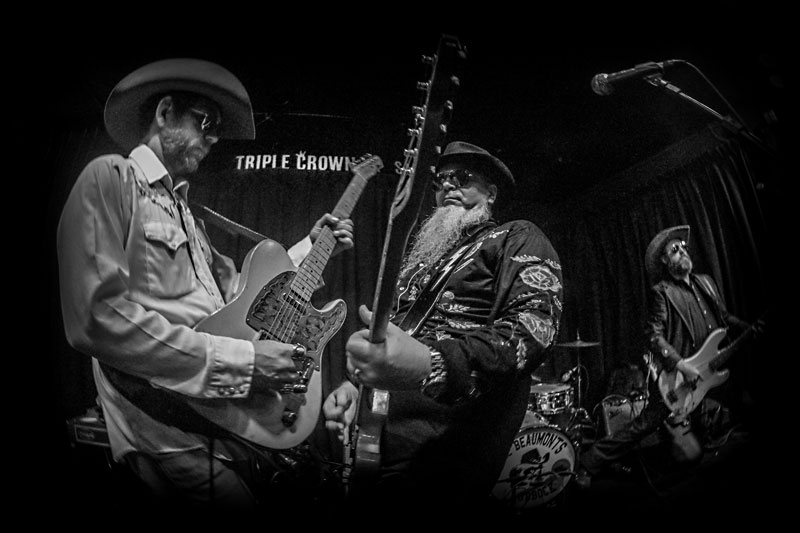 On Saturday night, the Triple Crown – lovingly labeled "the live music capital of San Marcos" – was so blitzed with regulars that it ran out of beer ... then whiskey, then vodka, then rum. The empty bottles symbolized the building's future: destined for the trash heap. The city's best venue is slated for razing in order to make way for a mixed-use development. Its closure ends an astonishing streak: 6,887 consecutive days of live music, including holidays and natural disasters.

"It wasn't anything we planned, but once it hit 1,000 days, we had to keep going," says Triple Crown co-owner/booker Eric Shaw of the streak that began in 1997. "We've had some close calls. During the flood, we lost power, but some jazz musicians from the university came in and played a short set."

Shaw and his partner sold the property at 206 N. Edward Gary St. in hopes of moving Triple Crown to a larger space.

"It was a tough call, deciding if we should relocate or not, and it finally came down to what you see here tonight," pointed Shaw to a line of 50 people waiting to get in. "We get to capacity several times a month, so it's just time to grow."

Ideally, the new Triple Crown will become a 300-capacity venue with a beer garden. Shaw has his eye on several downtown spaces in his price range and is optimistic for a fast relocation. Until then, there's a void in San Marcos' music culture.

"Triple Crown is legitimately the only place in San Marcos that's worth playing for a lot of bands," says Otis the Destroyer frontman Taylor Wilkins, who credits Shaw with giving him a stage to grow as a musician. "The Marc is 1,000-capacity and no one can draw that, Lucy's just has DJs now, Tantra can't have night shows because of sound issues, and Cheatham Street [Warehouse] doesn't have loud bands.

"If Triple Crown doesn't come back, the scene is going to die."

"Thank you, Triple Crown. This is the best place in the whole fuckin' world!"

"Borghesi is taking chances and being bold – we love him for it," WGS vocalist Cella Blue assured the affectionate Continental Club audience as the sextet beat out their unique brand of whorehouse hillbilly hokum. Soon she snuck onto the dance floor, distributing 2-D masks with Borghesi's face on it. 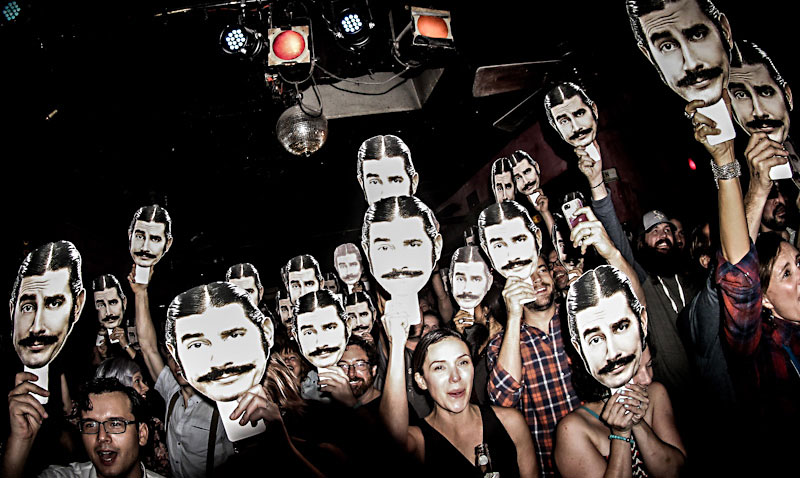 "Rich Guy" flashmob at the Continental (Photo by Kevin Curtin)

Even WGS virgins might recognize that dapper mug. One particular photo of a mustachioed Borghesi has become a ubiquitous, yet unattributed Internet meme known as "Rich Guy" – so pervasive that "Playback" recently spotted it as a featured decoration in an Icelandic bar. Last weekend, Borghesi was floored by the sight of 150 people sporting his likeness.

"For once, I don't know what to say," he stammered. "My eyes hurt from seeing all those fucking faces, but it also warms my heart."

No word yet on whether the group, six-time winners of Best None of the Above at the Austin Music Awards, plans to replace its banjoist. Borghesi says his exit opens him up to new adventures and projects. For now, his calendar remains full with Minor Threat tribute band Manor Threat and two popular DJ nights: the classic hip-hop party Cold Lampin' (third Fridays at Hotel Vegas) and the Second Sunday Sock Hop.

The latter nine-year institution, where Borghesi, Gabe Vaughn, and Tim Murphy spin choice oldies for shimmying masses, relocates from the White Horse to Barracuda next month, jumping to second Saturday nights. Borghesi blames the popularity of drunken Sunday brunches for a gradual dip in attendance.

"Many of the folks that would normally go to the Hop on a Sunday are already passed out by 9pm."

Twine Time deejay Paul Ray has been fighting for his life, according to wife Diana Ray.

"I've been trying to keep it hush-hush, but now I know he's going to survive," she told "Playback" last Friday. "He can look around the room, and his voice – that deejay voice – is coming back."

Diana refused to specify what ails her 73-year-old husband, who'd been absent from his locally adored vintage R&B segment Saturdays, 7-11pm, on KUTX 98.9, for four weeks. She did reveal that he'd broken his femur during a fall at home, followed by a two-week "state of delirium" while hospitalized – perhaps due to a bad reaction to medicine.

"Several days ago, while he seemed far away, I wondered if he'd respond to music, so I looked in my phone to see what I had," he recounts. "I found 'You Upset Me Baby.' I knew he'd like that, if he could hear it, because we used to do that song in the Cobras. After a moment, he softly said 'B.B.'

"Then I found 'Blue Velvet' by the Clovers. He began to softly sing along. It was moving."

R.I.P. Winter: The white wolf dog that accompanied local punk blues duo Ghost Wolves to their shows, howled on every record, and signed their record contract via an inky paw print, died of cancer last week at age 9. The group honors its third member with a song, "Journey On," available on Bandcamp.

Suzee Brooks retires from her night job serenading drinkers and dancers as the co-vocalist for Fingerpistol, winners of 2014's Best Country Band at the Austin Music Awards. Brooks' exit, following 10 years of service, may drop the locals' raunch level, but the group has a ringer on deck with blond bombshell Meg Bodi. 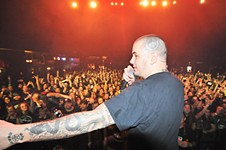 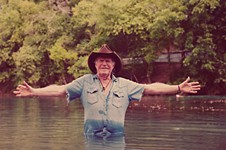 Playback: Long in the Tooth
Songwriting 101 from Billy Joe Shaver 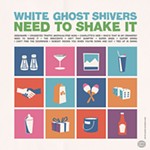 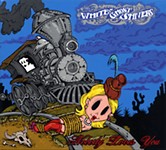 White Ghost Shivers
Nobody Loves You Like We Do (Record Review)