Even in reflection, Tameca Jones isn't capable of subtlety, everything surfacing simultaneously somatic and visceral. She speaks in emotional tones, often acting out her responses in a rocky stream of consciousness. It's equally amusing and stirring to watch her micro-aggressive elations.

These bursts became rule-breaking performances at the Continental Club Gallery and C-Boys Heart & Soul, where she bent and twisted covers, ranging from Nirvana to Aretha Franklin, into sonic pretzels. The crunchy jaggedness juxtaposed her infectious, honeyed voice. Where the unimaginative let the originals' tone and tenor lead their iterations, Tameca Jones controlled each with an unwieldy, reckless abandon.

"I think it's always been there because I'm not really good at melodies, like staying true to melodies," she says. "I noticed even as a youth I would change up the melodies and make it my own. I really got into it when I started doing jazz. When I first got into music, I was like, 'You know what? I can do a cool R&B jazz thing.' I started studying jazz songs, and tricking them out.

"The first thing I did was [Ella Fitzgerald's] 'Summertime' mashed up with [Led Zeppelin's] 'Since I've Been Loving You.' It was the coolest thing."

As the local songstress trucks forward into untested waters – as a solo act with original material – she's admittedly insecure about breaking through the wall: "Everything is based on feel and instinct. It's hard to write a good song, especially if you don't know much about music theory and things."

"Insecurity can be a great thing if you're willing to be transparent about it," he says. "She doesn't think that she has all the answers, and it's great. Because as music listeners, I don't want to listen to someone that has all the answers, or thinks they do, because I know they're full of shit.

"I want to listen to someone that's just telling me where they're at right now. I want to identify with it."

For a relatively known, Austin-raised entity, there's a recurrent cabbage-patch quality to Tameca Jones. Where has she been hiding? Never secretive, her history remains somewhat muddled and complex.

"I sang [Mariah Carey's] 'Vision of Love' at my school talent show, and that's when I knew I could sing. I definitely liked the attention that I got. [Later], I went to a karaoke contest and lost, but the person told me I should find a band – front a band. I was like, 'Oh, really?' That got me to [neo-soul band] 8 Million Stories. I answered [their ad] on Craigslist and we became a band."

Of that experience, she learned what she didn't want to be as a musician: not in control.

"I was kind of green in that band. All these guys knew everything. I was just a singer who wrote, singer-songwriter, whatever. They would play their little instruments, and I would sing and write lyrics and melodies off of that, but it just got to a point where I felt suffocated.

"Looking back on it, I probably could have gotten a lot more done had I teamed up with somebody, but I was just afraid of having their style forced upon me," she continues. "I just wanted to be my own thing. It taught me to be very protective of my music and my style.

"After we broke up, I moved to San Francisco with my twins. That didn't work. Then someone gave me the idea like, 'You should do a jazz thing. You could play clubs and parties – stay on the scene – and make a little money while you write music.' I was like, 'Yeah, hell yeah. I'll do that.'

"I spent months studying jazz, and trying to pick what songs I felt were good for me. [I thought,] 'You're going to be the next Kat Edmonson.' Nope. Then that spilled over into the Continental Club Gallery."

Like many performers before her, none of this was supposed to happen.

"I went to Baylor to be an entertainment attorney. I wasn't even going to be a singer. Then, I got pregnant with twins. I had to drop out, and whatever."

The pressures of scholastic success, even before Baylor, were immense for the 36-year-old singer. Additionally, she was diagnosed with narcolepsy while in high school, for which she was prescribed Ritalin. Overwhelming stress, anxiety, and an intrinsic need for acceptance, surely familiar to many, led to a suicide attempt. Her rebound into success has been remarkable. She yearns for more, but understands the stakes.

"One [driver is] desperation," acknowledges Jones. "[Because of the narcolepsy,] it's hard for me to maintain a balance of sleep, of being sleepy and awake and not being too hopped up on drugs to function."

Plus, there's the worsening financial realities a vast majority of Austin musicians continue to deal with. Here, her friend and confidant Georgia Bramhall, daughter of Texan music great Doyle Bramhall and younger sibling to DB II, weighs in.

"I know lots of [talented acts] that should have gotten further along than they did," says the Austin-born Bramhall, a popular hair stylist at I Love You Pink. "Austin clubs don't pay very much, and there are a million bands that will play for [so little]. People play for free practically, so it weeds out talent."

"It's funny that [having] kids actually makes [most] people want to stop being a musician," she says. "Usually it's like, 'This is not going to be a profitable thing. I'm going to go have a desk job or whatever, because I got a kid right now.' That actually propelled me to get into music. There's no 'plan B' for me. It's like ride or die. This is it."

Electrifying a sold-out Austin Music Awards in March both during the Viva la Diva segment (wherein she covered Blaze Foley's "If I Could Only Fly"), and to close during a charged tribute to Small Faces/Faces keyboardist and late Austinite Ian McLagan (emulsifying "[I Know] I'm Losing You"), now serves as a primer for Tameca Jones' appearance on Friday at ACL Fest.

"There's a little bit of anxiety because I'm not hiding behind any covers," she admits. "I'm naked. These are my songs. But it's also exciting because when I was doing those covers, it's like wearing someone else's clothes, wearing someone else's skin. You get tired of putting on all that makeup. You want just to be naked and be like, 'This is me.'"

Armed with an excellent piece of original music – the breathy "Hot and Bothered" – Jones' inner circle sees a forthcoming breakthrough as imminent.

"She's already proved herself an amazing performer and an amazing singer," emphasizes McPherson. "I think what people are about to see is that she's not just an amazing songwriter, but just an incredibly emotive one too. It's not some kind of cookie-cutter thing.

For Tameca Jones' part, she understands what teeters in the balance.

"Right now I'm at the ceiling. I can either stay here at the ceiling, and bob my head and be chill. Or, I could break through. Either this year or next year, it's going to be like 'make or break' for me. It's a hard reality, but this is all I can do right now."

Tameca Jones debuts at the Austin City Limits Music Festival by opening Friday, Oct. 9, on the Austin Ventures stage at 11:15am. 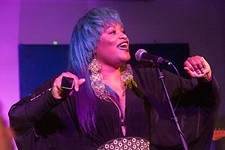