Inviting Janelle Monáe to play a masquerade ball he was throwing in Oakland was one of the smartest moves Jidenna ever made. Many years later, the besuited singer and MC is signed to Monáe's Wondaland label and earworm "Classic Man" – plus a remix laced by Kendrick Lamar – broke as a swanked-out summer hit.

"It was the dopest summer camp you could go to as an adult," Jidenna says of recording label compilation EP The Eephus at Wondaland's suburban Atlanta compound. "We were waking up and doing yoga. We were cooking together, sleeping on the floor, sometimes in white tunics. By nightfall we'd be dancing around the fire pit or jumping on the couch, drinking fancy juice – Wondapunch.

"Everybody would have an instrument in their hand; everybody was on the mic all night. It was just a fun time, an adult playground in the most pure musical sense of that phrase."

In addition to occasionally living in a communal creative utopia, the Wondaland crew has been joining street protests in solidarity with Black Lives Matter while on the road promoting their EP. Jidenna Theodore Mobisson, who studied Race and Ethnicity at Stanford, was hit hard by the reality of U.S. race relations at age 7.

"I was raised in Nigeria and my mother is white, but I never saw her as white, not until I came to America," he says. "She was just my mother. She didn't really have a color. When I came to America, the first day of school I was called an African nigger and punched in the face by another student. I had to go home my first day of school in America and ask my mother what a nigger was.

"If that's your introduction to a country, that's the first awakening you have. Not unlike our country's history, my personal history was founded upon an unfortunate history of racial conflict between black and white." 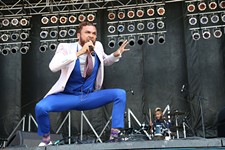