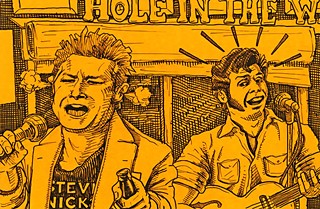 The Hole's walls have seen many legendary happenings: Courtney Love locking herself in the bathroom with a local dealer; fans chasing down a frat boy who stole Miles Zuniga's guitar while he was performing; Ivan Neville sitting in with Paul Minor's Last Waltz tribute; a drunken Santa Claus falling through the big window out front. No memory boasts greater mythological status than the night of July 31, 1992, when Eagles singer/drummer Don Henley jumped onstage with Mojo Nixon & the Toadliquors to join in a version of "Don Henley Must Die."

"I don't know how many people can fit in the front room, 100 at the most, but about 5,000 people have told me they were there," chuckles Nixon, 22 years after the fact.

The cow-punk icon had gotten word from one of Henley's buddies, a regular at the Hole, that Don might show up that night, but he nearly shat himself when his road manager approached the stage and said, "Dude, it's fuckin' him!"

"There I was, the king of bullshit, completely flabbergasted," remembers Nixon. "I took my guitar off, put it back on, did that like three times, then got on the mic and said, 'Don, do you want to debate? Do you want to fist fight?' He was shit-faced and he goes, 'I want to sing that song, especially the part about not getting together with Glenn Frey!'"

The band launched into the track with Nixon singing the insulting verse: "Poet of despair/ Pumped up with hot air/ He's serious, pretentious, and I just don't care." When the chorus hit, Nixon let Henley take the lead: "Don Henley must die, don't let him get back together with Glenn Frey!"

"He was beltin' that shit out, screaming like he was Johnny fuckin' Rotten," says Nixon.

When the song ended, Henley shook hands with the band, who complimented his "balls as big as church bells." Then, says Nixon, he walked outside and failed to open his car door because he'd put his key into the wrong Mercedes. Everyone watched through the window as the Toadliquors covered the Eagles' "Already Gone."

The experience gave Nixon respect for Henley: "I was surprised he was so magnanimous and that he didn't punch me. That stage is so tiny, he could have knocked me out at any moment."

A request has been filed with Eagles manager Irving Azoff asking that Henley appear at the Hole on Saturday, June 28, for the Toadliquors' anniversary performance that evening. For some reason, Nixon doubts Henley can make it: "I'm pretty sure he's busy with his Eagles reunion nonstop cash grab."