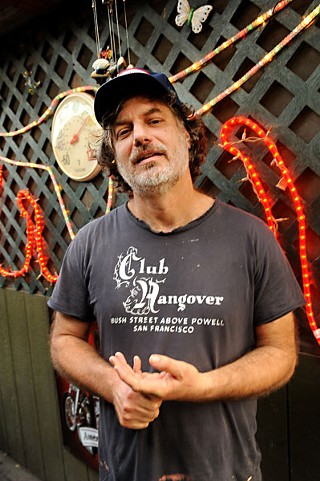 A man with a scruffy beard and eyes o' mischief approached Kevin Russell after a Gourds gig at Antone's in early 2002 and introduced himself.

The singer-songwriter, whose cassette the Gourds had worn out on a recent European tour, was black and probably dead 30 years. First impressions can be powerful. Like how you hear a cover song first and it becomes the original, at least in your mind.

I met Ramsay Midwood 11 years ago on the 11th hole of the old Bergstrom golf course. My first thought was that he was a prisoner given leisure time for good behavior. He was playing by himself, but his cart was driven by a uniformed female guard packing heat. The exercise yard of the Del Valle jail ran alongside the second hole, so I spent the first couple holes thinking Midwood might suddenly start swinging during an escape.

Turns out the guard was a friend looking for a couple hours out in the air, but Ramsay still carries that scent of danger to me, which makes his albums of surrealistic, mud-caked, boogie folk music all the more appealing. That day on the links, he told me he'd moved from L.A. to Austin in the wake of his house burning down a month after 9/11. He and then-wife Lisa Simmons and their baby son Levon had rented a house that turned out to be next door to Bob Dylan's guitarist, Charlie Sexton. How do you like that?

At that juncture, Midwood was signed to a three-album deal with Vanguard Records, the Sixties imprint of his idol Mississippi John Hurt. The label only released Midwood's 2002 CD debut, Shootout at the OK Chinese Restaurant, which they licensed from the German label that had issued the version the Gourds heard. Midwood made his next two LPs, Popular Delusions & the Madness of Cows (2006) and Larry Buys a Lighter (2011), on his own dime.

About a year and a half ago, having never established a local club presence, he began playing regularly at Eastside honky-tonk the White Horse. In fact, it was Midwood who introduced Leo Rondeau, Mike & the Moonpies, Russell's Shinyribs, and Mike Stinson to each other for a South by Southwest showcase he hosted at Sam's Town Point in 2007. The wildly popular White Horse scene had its godfather.

"This is the best band I've ever had," he says of his current outfit.

On a recent Tuesday night at the club, Ramsay, guitarist Bill Mullin, who also drums when Scott Mason can't make it, plus Bryan Mammel on keyboards and bassist Jeff Johnston (Li'l Cap'n Travis), fill the dance floor. It seems incongruous to see couples dancing to a continuous, slow-burning blues boogie, but one White Horse regular had the answer.

"Dancing to Ramsay's band is so sexy. It's not like some corny, retro honky-tonk shit. A lot of those people," she gestured to the dance floor, "are gonna get laid tonight."

Cultivating a mystique he's worked long and hard on, Midwood's cagey in interviews – terrible on dates ("It was either '91 or '96") – but sit him down at Sam's Town Point in far South Austin and he'll talk. It's the bar whose entrance comes emblazoned with one of the famously disturbing little girl images of L.A. street artist Becca ("the female Basquiat," according to Slate), his younger sister.

He was born in Woodstock, N.Y., to novelist father Bart Midwood, who paid the bills as a writer for Esquire magazine in the Sixties and Seventies, and painter mother Susan Kellogg. After his parents split up when he was five, Ramsay and Becca, three years younger, lived "lovingly unsupervised" in Arlington, Va., with their mother. His father, also a noted composer and playwright, taught Ramsay a few chords on the guitar he handed down. Further education came at the Folklife Festival in D.C., where he sat at the feet of Lightnin' Hopkins, Son House, and other folk/blues greats.

"I only listened to old guys growing up, so I thought that was the way you were supposed to sing," says Midwood of his craggy delivery. It was in the D.C. suburbs that he developed another all-consuming passion.

"I became addicted to golf the very first time I tried it," he recalls. He was rummaging through the attic one day in Arlington and found his grandfather's golf clubs. "We were dirt poor, but there was a country club not far from our house. So I jumped the fence and just started playing. I shot par on my very first hole."

After graduating from James Madison University in 1987, he hightailed it to Chicago, where some of his theatre pals from college had gotten roles in the Steppenwolf Theatre production of Tom Waits' Frank's Wild Years. Midwood also hired on at Steppenwolf, to play Floyd Knowles in a 1988 production of The Grapes of Wrath. Knowles reveals the bleak work prospects to the Joads upon their arrival in California.

To prepare for the role, Midwood studied up on the Depression in the Chicago Public Library, with its shelves of old records that can be played in soundproof cubicles. He discovered Charlie Poole, Jimmy Driftwood, Charley Patton.

"That really began my journey into the musical abyss," he states. "I just kept asking, 'Where is this world that used to exist?'"

Though his acting résumé states Midwood moved from Chicago to Los Angeles for a high-dollar beer commercial and other television opportunities, he actually followed an actress. That relationship soon ended, but his musical journey found a path in frequented music jams at Viva Fresh, a Mexican restaurant in the San Fernando Valley.

"It was the first time I'd been around folks who were as serious about their music as I was," says Midwood.

Key among those was Randy Weeks, guitarist for Lonesome Strangers, who co-produced and played on Shoot Out. Recording that first disc and getting positive response was an exciting moment for a guy becoming known as the musician who acted, instead of the other way around.

"I used to go down to the Goodwill Career Development Center every day to use their computer," he says. "Finally they asked me what I was doing. I said, 'I'm running my record label,' and they said, 'Well, you're supposed to be looking for jobs like a forklift driver.'"

Midwood, who has a 6-year-old daughter with Cathy Guthrie, Arlo's daughter, was part of the Woody Guthrie family for a while, but the Okie he's more aligned with is J.J. Cale. One of the greatest honors of his career came last year when he got a call from the late guitarist's longtime sideman Karl Himmel. The drummer was a fan of his albums and saw Ramsay headed his way for a show.

"He put the band up at his house and then came to the gig and sat in on a few songs. It just felt so right," says Midwood, putting away another Topo Chico. "There aren't all that many people out there that get what we're doing, but the ones that do, really get it."

The expedition for this lost America that began 25 years ago ends in Midwood's ghost music, which echoes like a holler from the subconscious. Like the Bergstrom golf course that smelled of jet fuel and closed not long after 9/11 because it was too close to the airport, we're losing real things for no real reason. When you play Ramsay Midwood's music in a car on the interstate, you'll find yourself getting off and taking the back roads. If anything true in this world still exists, you'll find it there. 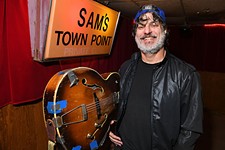