Miles and miles with Mike & the Moonpies 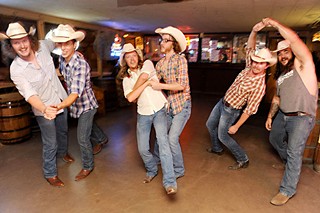 There's a camera on Mike Harmeier. It's been on him all night.

They're filming a documentary about the scrawny, string-haired songwriter and his band, Mike & the Moonpies, the finest young crew in Austin honky-tonk. It's mid-July, the last night of the group's Thursday residency at the White Horse, a weekly destination that lasted for more than 72 weeks.

"Someone's got to capture this before they're gone," the documentary's producer, their friend, the songwriter Chris Brecht says a few nights before the show. "What they've done here, not a lot of bands have done in a while."

At the moment, the cameraman can't get a good shot of Harmeier, because the singer keeps getting diverted by friends. Everybody's chatting him up tonight, offering congratulations and Lone Stars. They send their well-wishes and move on to the dance floor. Everyone knows this is the residency's final night. They're all here for a last two-step.

The White Horse walls come caked in the sweat of the Moonpies' six members. Quite literally: They painted the red and brown walls of the joint before it opened December 2011. Then they uprooted from their Monday slot at the Hole in the Wall for the midnight shift on Thursdays at the East Austin venue.

"These guys work harder than 99 percent of the bands I've seen in this town," offers White Horse co-owner Denis O'Donnell, who started working with the band when he was the general manager of the Hole in the Wall in 2008. "And I've been in Austin since 1999."

No surprise, then, that the dance floor's filled to the tables by the second song – filled with masters and hacks and couples and friends. It's dark as daybreak out there, sweaty and drunk. O'Donnell throws a round at the bandmembers. It's past midnight and the party's got hours to go.

The Moonpies are bringing down the curtain on this scene because they've recently signed a booking agreement with Red 11 Music, an Austin-based talent agency that works with clay-kicking country crews like Crooks, Turnpike Troubadours, Jason Boland, and Cory Morrow. A once easily mapped tour schedule has spewed sideways and out, so the band needs its Thursday nights for new markets.

"We've got to get to Dallas that night if we're in Oklahoma on Friday," Harmeier explains. "Lately we've averaged about 500 miles per weekend. Looking at the calendar, it's going to get way higher than that."

This month, the Moonpies play 14 dates in nine Texas towns, plus Oklahoma and Arkansas. In November, they're in Tuscaloosa, Ala., one Friday, then Knoxville, Tenn., that Sunday. They just bought an RV complete with a bathroom, sink, fold-out couch, and queen-sized bed in the back. Harmeier calls it the best investment the band's ever made.

Tonight's all about the White Horse, though, and Mike & the Moonpies' tree house infatuation with it.

The evening ends with Harmeier laughing shirtless onstage, coaxed out of his pearl snap by Not in the Face singer/guitarist Jonathan Terrell, who's also half monty. The band's got a late afternoon load-in in Lubbock this same day. The RV leaves at noon.

It takes one hour and 56 minutes to get from South Austin to Bandera's Longhorn Saloon, but for Houston native Mike Harmeier, that first trip took years.

"I was trying to get into that club forever, because I had known the owner for years," he explains. "I used to get up and sing with him when I was 11 years old."

"I used to try to get gigs out there when I was playing in these blues bands, and he'd always say no. Finally he gave the Moonpies a Friday night. We got out there and he told me this later: 'I thought I was fucked 'cuz y'all looked like a bunch of kids from the Seventies.'"

Black's modified his stance since then, because the Moonpies in Bandera means the circus has come to town. Only 1,000 people live in the Hill Country hamlet. Friday at the Longhorn, roughly half that population will two-step.

"Where else would they go?" one young dancer asks me rhetorically. "Once they hear these guys, they stay."

The crowd at the Longhorn Saloon looks like it was cast for a movie about a Texas Hill Country bar called the Longhorn Saloon. It's diverse and homogeneous, aged and ageless. There are 11-year-olds with boots and large belt buckles, and old men in what might be slippers. From her bar stool, one woman says she rarely gets out of the house, but confides to me that her neighbor's now on her sixth husband.

"But that girl Katherine's a money-grubbing bitch," she says.

The woman takes a drag off her cigarette and reaches for her Budweiser.

The Moonpies spot up at a table and get drinking. They're buried in their iPhones when they're not slugging down Lone Stars. They've got three hours of music to make in Bandera. Nobody's bothering to make a set list.

The Longhorn dance floor fills up like that of the White Horse, but there's a quality to the dancing that drunk hipsters can't match. It's crisp and fluid. It's somehow spacious, but simple. It's the only endeavor many of the showgoers will engage in all night.

The Moonpies open at 9:17pm. They take two breaks and finish at 1:30am, with Brian Black's brother Kevin and his two kids finishing with a run through the classics: America's "Sister Golden Hair," Ray Charles' "What'd I Say," the Eagles' "One of These Nights." Most in the building are drunk beyond compare by the time the clock strikes 2am. The Moonpies, having just played nearly 30 songs, sit down for hamburgers and whiskey.

All-night gigs are what made Mike & the Moonpies.

"We never had rehearsals," Harmeier attests. "It was only shows, and every show was a rehearsal. Four or five shows a week for four hours each night. There was never any time to do anything else."

The band was born from a dream of no day jobs. Four nights of gigs could replace five days pushing paper. Anybody who could make it through those sets was in: first Rhone and drummer Kyle Ponder, then guitarist Catlin Rutherford and pedal steel player Zach Moulton.

"That's the same way we broke in Johnny Carbone," Harmeier says of their keyboardist, the newest full-time member of the six-person outfit. "He was at the Hole in the Wall one Monday, and he was like, 'Hey man, I just moved here from Boston. I play keyboards and really want to play in a honky-tonk band.' I had a Halloween gig and didn't have any other soloists, so I gave him a call and asked him to sit in. He was nervous as shit, because he didn't know any of the songs, but he started playing Mondays with us. We only had one rehearsal with him, ever."

It's a work ethic you can still see at the Broken Spoke, the venerable South Austin honky-tonk that the band holds down semimonthly. The dance hall, dwarfed now by a tandem of four-story apartments (see last week's "Waltz Across Texas"), runs a tighter ship than the freewheelers at the White Horse. Here, the audiences come to dance, not to see Harmeier's nipples.

Harmeier knows this. That's why, despite Red 11's touring schedule, he's committed to club owner James White for two Wednesdays a month at the Spoke. After six years, including 2010 LP The Real Country and its 2012 follow-up The Hard Way, he's earned it. They all have.

"I still tell them what I want to do," Harmeier says of his new agents. "I want to do the Spoke, play the White Horse on a Friday or Saturday; I can say that. I made it clear to them that this is something that I've built for a long time. I know how to work myself in this town."