Joe King Carrasco moves through the crowds in downtown Puerto Vallarta with the swiftness of a spirit. Locals have packed the narrow cobblestone streets for Peregrinaciones, a sort of Aztec Mardi Gras parade celebrating the apparition of Mexico's honored Virgin of Guadalupe. We're late and our guide's hauling ass.

It's all my girlfriend Molly and I can do to try and stay in step as he navigates the madness. The air's hazy with copal smoke and sizzling street meat, and loud with the clangor of clashing street bands. Legions of teenage boys dressed like ancient warriors dance around us to the pounding of a wooden drum, while girls portraying the sacred virgin roll past on decorated truck beds. Carrasco turns and smiles at us, "Wild, ain't it?"

An Austin staple since the Seventies, JKC remains a venerable instigator of the cultural collision known as Tex-Mex rock & roll, which playfully fuses oldies garage rock with Latin affectations. He holds four distinctions that make him something of a saint himself: He was the musical guest on Saturday Night Live in 1981; Michael Jackson sang on his 1982 track "Don't Let a Woman (Make a Fool Out of You)"; Manu Chao cites him as an influence and covered his song "Pachuco Hop"; and he was once lauded by the quintessential music sage Lester Bangs as being "the most manically irresistible rocker to come along in ages."

Carrasco, who'd long partied and performed here in the state of Jalisco, began hanging his crown in the tropics six years ago. He didn't merely move here, either. He fell in love. Puerto Vallarta, go figure, turned out to be the perfect incubator for his jalapeño-flavored musical quests.

"Everywhere you go in Mexico, you hear music, and it's really inspiring," he explains to me as mariachis walk by and distant tubas blurt banda bass lines. The streets here, he says, are his lyrical muse. "I write Tex-Mex. People here speak English and Spanish. I hear all the street slang; I write it down, I study it, and it becomes part of my music."

Here, Carrasco's a man of the people, known by cabdrivers and street taco vendors alike, but he doesn't often commingle with gringos. In that regard, Molly and I are lucky. Watching him shoot the shit in Español, his boyish laugh always present, I note that he frequently uses the term "tranquilo" ("tron-key-low").

"It means chilled out," he says. "It's what I'm always looking for."

As we stand on the street corner, a well-dressed drunk stumbles up to us, chugs liberally from a pocket liquor bottle, and points to Carrasco: "No one plays the kind of music this guys does!"

JKC holds court at Nacho Daddy, a downtown cantina decorated as a veritable shrine to his music career. The interior comes wallpapered with Joe King Carrasco flyers from all over America and Europe, some listing R.E.M. as the opening act, others hand-drawn by his Swiss friend H.R. Giger. Nacho Daddy's gift shop, where you can buy a variety of Carrasco gear, is painted to look exactly like the Matt's El Rancho sign in Austin, his little nod to home. He plays here every week with various local musicians backing him. He's still a one-man-fiesta: playing his Telecaster behind his head, running out into the street, and climbing up the building's outer wall. ¿Por qué no?

The next day we join him and his three old dogs for a steep drive into the mountains to check out some property he's procured. En route we listen to mixes for the upcoming Joe King Carrasco & El Molino album Tlaquepaque, which counts veteran CenTex musicians Speedy Sparks, Ernie Durawa, Joe Morales, and Augie Myers among its players. The smooth bilingual jams become our soundtrack as we ascend into rural Mexican hills.

Our arrival reveals an uncut swatch of land at the top of a valley by a mountain spring. Free-range cows graze where Carrasco's small getaway house will someday sit. The nearby town San Sebastián, a brick and cobblestone vestige of the colonial era, miles out of range of cell phone service and only recently bestowed with the convenience of a two-lane road, looks like the set of Zorro. We stop at a cafe for dinner. A power outage hits as we wait for our food. No one fusses. An oil lantern's lit, and everyone happily eats and drinks as sunset brings blackness. We like it here. It's muy tranquilo.

In case you were wondering, JKC's not Mexican. He's German. He appropriated the name Carrasco from a south Texas heroin kingpin who died in the 1974 Huntsville prison siege. In two years, though, he'll be eligible for Mexican citizenship, and he plans to apply. Joe King Carrasco's life reveals itself as the actualization of what his music always drove at: cultural fluidity for the sake of a good time.

› When KUT asked its listeners "What does Austin sound like to you?" they responded by sending in field recordings of grackles, scooters, jackhammers breaking ground, and about 90 other noises that characterize auditory Austin. The station then enlisted a diverse group of local musicmakers – Adrian Quesada, Blaze, Graham Reynolds + Butcher Bear, and more – to construct original songs using the samples. Local folk-pop singer Dana Falconberry, who utilized sound snippets and field recordings for the first time on her 2012 release Leelanau, was intrigued by the prospect of creating a song using community-submitted ingredients. Her track, tentatively titled "Morning Will End the Night," uses the chimes that signal Austin's light rail as a basis. "I started the process thinking that I would end up using mostly percussive and rhythmic sounds, but the ones I ended up using were actually the more ambient and melodic sounds," she explains. "I think my favorite was the singing bowls, but I also love the thousands of birds and the bats." If you're interested in seeing how crafty these musicians got with samples, come to the ND at 501 Studios Sunday and watch them debut the new songs live. 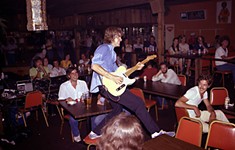 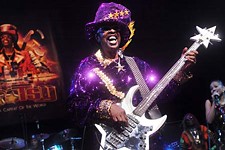