Anchoring FOX 7's Good Day Austin for 17 years, Joe Bickett is a familiar face in the state capital. He's a friend to local music as well, always showing interest in the bands featured on the show. After Friday's broadcast, Austin loses Bickett to his old stomping grounds of Reno, Nev., and for that, we are sad.

Playback: You're a little bit of a guitar player yourself, right?

Joe Bickett: Yes, but "a little bit" is the operative word. I do it more to amuse myself. When we bring all these musicians on the show, especially the longtime guitar slingers, I watch them and go, "Ohhh, that's how it's supposed to work."

PB: Ever rock it onstage?

JB: I did it once with a local rock band called Tungsten Coil. It was midnight down on Red River. I think it was at Emo's. They had been on the show a couple times and heard that I played. They said, "We need to work on one song and you can come up on stage and play it with us," so I did.

JB: I'm a big metal guy and Katherine Kisiel, my co-anchor, is a big fan too, so when AC/DC blew through we saw them at the Erwin Center and pretended like we were teenagers again.

PB: What will you miss most about Austin?

JB: Well, obviously I'm going to miss the morning crew because these guys have been a big part of my life for 17 years. I'll also miss the Hill Country and the people wandering around. Those bumper stickers really say it, "Keep Austin Weird," because there are a lot characters here. Austin's been good to me. 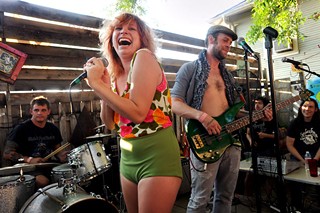 Last weekend's two-day music fest at the Spider House/Spider House 29th St. Ballroom signaled a more ambitious booking plan for the campus hangout. Once little more than a cafe, it now has bands almost every night and up to four stages to utilize. While the School's Out Forever Rockaway Beach Party honored Joey Ramone's birthday, playbills for a similar event next month advertise a birthday bash for another punk legend, the locally controversial Glenn Danzig. Spider House General Manager Jason McNeely says they have festivals planned throughout the summer, with lineups largely made up of local acts. "We decided very early on not to compete with the big booking companies and instead book locals to build a community," he reasoned. On Sunday, with the sun setting behind them, Bobby Jealousy lit up the stage with thrashed-out soul pop. Most bands have one or zero good vocalists, but the hard-buzzing band has three, including the typically leotard-clad Sabrina Ellis. Ellis, who pulled double duty in also fronting her other band A Giant Dog, upped the spunk with exuberant backup vocals, while her Jealous bandmates kept the party going with their loose brand of retro rock. When the house bass amp blew, singer Seth Gibbs hopped around with Ellis for the ultra-catchy closer, "Rainbow." Bobby Jealousy is summer vacation.

When Reggie Watts brings his otherworldly talents to the Scottish Rite Theater this weekend (see Music Listings, p.74), those present will experience him in a unique and extraordinary venue. The antique opera house, brought to you by Emily Marks on behalf of a fraternal men's society that may or may not secretly control the government, feels like a place time passed over. The 19th century interior is stunning for its premodern idiosyncrasies: constellations painted on the sky-high ceiling, a cavernous stage draped in red and gold curtains, and Freemason symbolism including a two-headed golden eagle perched above the stage and the stained glass portrait of Grand Master Samuel Poyntz Cochran watching over the room. The almost vaudevillian ambience of the theater is peerless in this town, so to renovate it would be to fuck it up, which is why the only major update Marks has made during her short reign as art director is installing a quality sound system. "I want to fill this space with adventurous programming, events that are off the beaten path and artistically challenging," she says.

• The lineup for this year's Austin City Limits Music Festival was announced Tuesday. And the whole shebang sold out by Wednesday. Headliners include Neil Young & Crazy Horse, the Red Hot Chili Peppers, the Black Keys, the Avett Brothers, and Florence + the Machine, but perhaps the biggest surprise was the three-day Zilker Park extravaganza's dates: October 12-14. Locals always lobby for just such post-heatstroke timing, but rain has factored in before at that juncture. "Playback" is excited for Iggy & the Stooges, Barrington Levy, and the Devil Makes Three.

• Following in the footsteps of Monsters of Folk, Middle Brother, and New Multitudes comes supergroup Divine Fits. Merge Records, home to Austin's Spoon, announced this week that the group's frontman Britt Daniel has a collaborative disc scheduled this year with Wolf Parade's Dan Boeckner and Sam Brown of personal faves the New Bomb Turks. You can follow the project's updates on Twitter @divinefits.

• "(Is Anybody Goin' To) San Antone" for the Doug Sahm exhibit at the South Texas Popular Culture Center? The new regional music museum, headed up by the Chronicle's Margaret Moser and Michael Ann Coker with help from Hickoids' singer Jeff Smith and promoter Joe Pugliese – brother of Sons of Hercules icon Frank Pugliese – celebrates its grand opening all weekend with "Texas Me: Doug Sahm's San Antonio Years." From child sensation Little Doug to faux-Brits Sir Douglas Quintet, the show documents the early career of Sahm through articles, photos, and unseen family artifacts.

• Emo's East owner Frank Hendrix is the subject on a reality show for the Discovery Channel. Riverside Drive's new venue baron wasn't at liberty to discuss details beyond that filming has already begun and the show will likely air early next year. A camera crew was scheduled for the Dandy Warhols performance at the venue Tuesday.

Don't think of the Good Music Club as a bargain bin version of Austin City Limits. The local video series, segmented weekly on our Earache! Music blog, features Austin acts performing at the ND at 501 Studios. Hosted by KUT's Laurie Gallardo, in partnership with English concert veteran Richard Whymark and French director Roman Aujon, the series has wrangled some of this town's most notable indie talent in its five-month existence. "We're taking the best Austin bands and showing them off to the rest of the world," says Gallardo. People are noticing; Whymark counts John Doe (X, the Knitters) as a fan. "He's been showing it to his label," he says. "So they're in California and on tour enjoying the new crop of talent coming out of here." Bands who have taped include: Crooks, Quiet Company, Not in the Face, the Blind Pets, and the Calm Blue Sea. This Saturday's free-as-always GMC event features the gutsy synth-rock of the Boxing Lesson and the histrionic barroom ballads of Mr. Lewis & the Funeral 5, among others. Along with being streamed online on the GMC's radio channel, Whymark and Gallardo plan to release a DVD compilation for bands to sell while on tour. 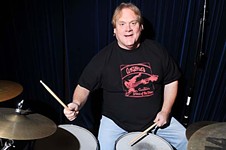