Hamburg, Germany, is famously credited for the Beatles' "baptism by fire," a double entendre for the sexual liberation afforded by the seedy Reeperbahn and the Fab Four's extensive club dates in the region between 1960 and 1962, which included 92 consecutive nights at the Top Ten Club. Last weekend, the harbor city hosted the sixth annual Reeperbahn Festival, a music conference boasting more than 200 acts across three days, with an emphasis on potential over star power. The event's the European version of South by Southwest – except set in the Red Light District – complete with a Flatstock poster convention, industry panels, and showcases taking place everywhere from the tourist boat Frau Hedi to the district's namesake church, Saint Pauli. Here are five acts OTR found worth writing home about.

"Destruction happens," remarked Erika M. Anderson after ripping a guitar string. "This city understands that." That's an understatement for both parties. As Oakland, Calif.'s EMA, the former Gowns guitarist carved out noise-pop confessionals as immediate and distressed as PJ Harvey's 4-Track Demos, peaking with startling covers of the Violent Femmes' "Add It Up" and Gowns' provocative mantra "Cherylee."

Berlin composer Sascha Ring's latest electronic export as Apparat for Mute Records, The Devil's Walk, explores the moody digitalization of Thom Yorke's The Eraser through the lens of Sigur Rós' unresolved grandeur. The result's an intricate work, more suspension than release, but the surreal setting made his performance a festival highlight: Uebel & Gefährlich, the fourth floor of a massive concrete bunker from World War II.

Jóhann Jóhannsson's on the dark side of the Moog. Actually a quintet (four analog organists and a drummer), the Icelanders' lunar oddities layer percolating grooves and vocoder to Krautrock perfection, as efficient as the city's Miniatur Wunderland train museum. Think Black Moth Super Rainbow suited for a black-tie affair.

Imagine if Ghostland Observatory cut its teeth on the Reeperbahn instead of Red River. That's the Hamburg duo of ClickClickDecker (aka Kevin Hamann) and Der Tante Renate, an obvious local favorite that shook the Beatles' onetime landing strip Grosse Freiheit 36 at capacity. Bratze turned out dance punk at its Euro-sleaze extreme, with four-on-the-floor electro house convulsions mashed against jagged guitar fissures and shouted German vocals.

Nakia makes an ideal spokesman for the Health Alliance for Austin Musicians. The blues belter is among the 1,200 working artists who rely on the esteemed nonprofit for low-cost medical and mental health services. "HAAM and the SIMS Foundation really did save my life," says Nakia, who was the first aboard HAAM's dental truck and who rocked HAAM's new watch throughout the live rounds on NBC's The Voice (see "Water to Wine," Sept. 9). "You cannot go anywhere else in the world and receive that kind of service just because you play music for a living." Alongside more than 160 local acts, Nakia will be doing his part on Tuesday, Oct. 4, to give back, performing twice – 8am at Whole Foods Cafe and 9:30pm at Antone's – as part of HAAM Benefit Day, the organization's annual fundraiser. More than 200 local businesses, spanning 24 Diner to Hey Cupcake!, are contributing 5% of their Oct. 4 proceeds, while patron donations up to $30,000 are being matched by C3 Presents and the Texas Heritage Songwriters Association. To further commemorate the occasion, Waterloo Records' parking lot boasts a stacked local bill: Quiet Company (4:30pm), Akina Adderley & the Vintage Playboys (5:30pm) Robert Ellis (6:30pm), and Reckless Kelly (7:30pm). For a complete schedule and list of participating retailers, see hbd.myhaam.org.

Another One Bites the Dust

Vulcan Gas Company. Raul's. Liberty Lunch. Add Emo's to the list of Austin's vanguard of vanishing venues. As intimated here last week, both stages of Red River's historic punk anchor were sold on Friday for "seven figures" to Sixth Red River LC, the same company that purchased the corner property currently occupied by El Sol y La Luna. Given the recent unveiling of the $2 million, 1,700-capacity Emo's East on Riverside Drive, owner Frank Hendrix said the iconic inside room, which he recently called "the heart and soul" of Emo's, was "just not feasible" to operate as a stand-alone venue, citing bus parking expenses anywhere from $2,000 to $4,000 a month. The inside room will close at the end of the year with a series of farewell shows. "In a six-month period, the contract for the sale changed five times," Hendrix told the Chronicle on Monday. "Originally, I had done a lease with these guys to operate the business through April 15, 2012. We were going to do our South by Southwest swan song and move on. Now that swan song will be December."

Dallas' beloved children's television entertainer Jerry Haynes, whose longstanding Mr. Peppermint series influenced four generations – as well as the work of his son, Gibby Haynes of the Butthole Surfers – died on Monday after a battle with Parkinson's disease. He was 84.

Country maverick George Strait has been added to Fire Relief: The Concert for Central Texas at the Frank Erwin Center on Oct. 17. The Texas-sized benefit bash features the Dixie Chicks, Willie Nelson, Steve Miller, Lyle Lovett, Joe Satriani, and Christopher Cross, among others. Also of note, the Octopus Project and Her Space Holiday headline a like-minded benefit at Red 7 on Saturday, Oct. 1, presented by the Disastronauts Foundation. 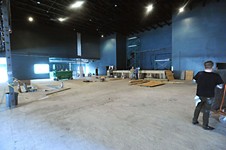 Off the Record
Gimme All Your Lovin': Emo's heads East as John Kunz looks back; plus, Whiskey Shivers' single malt success