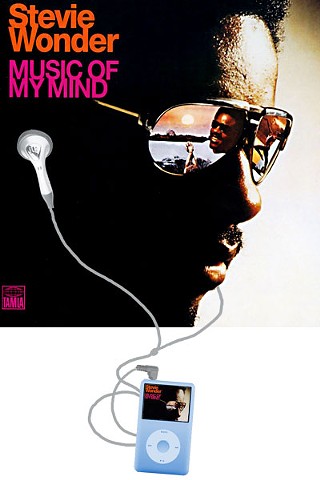 
I first heard "Fingertips" on AM radio as God intended, through a tiny speaker of horrid fidelity like Berry Gordy heard it before he approved the mix. Revival spirit, crowd noise, chaos ("What key? What key?") – I had no idea what was going on the first few times I heard it, which is a condition more rock & roll should aspire to: What is it? I saw Wonder several times over the years that followed, most memorably in 1975 at the National Stadium in Kingston, Jamaica. Rolling Stone sent me to cover a concert with Wonder, Harold Melvin & the Blue Notes (who missed their flight), a boxing match ("Thrilla in Manila"), and a reunion of the original Wailers, who put on a private show for me, Mark Jacobson, and my photographer in the former slave quarters behind 10 Hope Road, the ancestral mansion Chris Blackwell gave the Wailers. RS, predictably, didn't want a piece on the Wailers, just on the concert itself, nor did they want a piece on reggae, so that went into the first issue of Mother Jones. But the headline on the RS piece accurately reflected the way I felt about all of his shows I saw: "Will Wonder Never Cease?" – Ed Ward


In between dropping "Little" from his name and taking his place in the pop pantheon with Signed, Sealed & Delivered, 16-year-old Stevie Wonder crafted "Hey Love," a schoolhouse note slid to his would-be sweetheart over a loping piano melody. Closing 1966's Down to Earth, "Hey Love" was reportedly written for Detroit soulstress Bettye LaVette, who transformed the tune into a brooding groover in 1969. R. Kelly did the original no such favors on a 1992 cover, while De La Soul paid homage a year earlier on the deliciously quirky Prince Paul production, "Talkin' Bout Hey Love." "Can't you hear the music," the latter asks. "It's all about 'Hey Love.'" – Thomas Fawcett

Hotter Than July, 1980, "Master Blaster (Jammin')" shredding transistor radios everywhere – easy. But Christmas music? Country & western notwithstanding, Motown wrote the songbook on holiday treacle, and just as Little Stevie learned his most important lessons observing Smokey Robinson, Wonder's spirit sprig here offers its own seasonal Miracles. "Someday at Christmas, men won't be boys/Playing with bombs like kids play with toys." 1967 was just such a year. Dreamed up by early Wonder writer Ron Miller, with church bells and a piano twinkling like snowflakes, its Motor City vocal assignation almost makes you believe in peace on Earth. And every Christmas when 103.5 BOB-FM plays it, Wonder acquits the entire genre. – Raoul Hernandez


In the face of dropping bombs, there was enough division in 1970's musical interests that Motown head Berry Gordy probably scoffed at his pop star singing gospel music. The fourth track from Wonder's breakthrough Signed, Sealed & Delivered, penned by Ron Miller, poses a rhetoric about the strife of living with the Vietnam War and the assassinations of Martin Luther King Jr. and Robert Kennedy. Forty years later, its message shines as timely as Wonder's mountainous wails on the outro. Look at this summer alone: earthquakes, hurricanes, wildfires. "Heaven Help Us All." – Chase Hoffberger


Little Stevie Wonder stopped time the second he walked onto The Ed Sullivan Show and performed "Fingertips." It was like a Martian landing, sounds from another planet. By the time "You Are the Sunshine of My Life" was unleashed, there wasn't anything this prodigy couldn't do. Perfection in less than three minutes, it wasn't revelatory in terms of what it sounded like, but its emotional weight felt like a small slice of heaven had enveloped the world beginning with its opening electric piano. Wonder's voice unlocked an eternal secret he was sharing with each of us. Even today, time stops and hearts rush every time the song plays. Wonder of wonders. – Bill Bentley


As a grad student in Boulder, Colo., I dated a DJ with a weekly funk show on the student radio station. Every week I requested "Superstition" for its twanging Clavinet melody, just waiting for that chorus of horns to wiggle with pure joy. Listening to it now, I realize I never paid attention to the lyrics, concentrating instead on the sinister wocka-wocka funk and the visceral trill of the trumpet. Closer attention reveals independent thought: "When you believe in things that you don't understand/Then you suffer/Superstition ain't the way." Talking Book and this song served as Wonder's declaration of independence from the Motown sound. – Melanie Haupt

America needed a song like this in 1973. Released amid the disillusionment of Watergate and the sad close of the Vietnam War, Stevie Wonder's Innervisions remains track for track a work of uncommon power, vision, and social politics. Yet "All in Love Is Fair" isn't a song of false hope or reconciliation, but one of resignation to a decision and its consequence. "But all is fair in love/I had to go away," strangles the heart until it drips blood, because here lyrics count. "All in war is so cold" stabs an icicle of regret in every version. "All in love is fair/I should have never left your side." Damned if Wonder's not right: "A writer takes his pen to write the words again that all in love is fair." – Margaret Moser


"Watch this, y'all." So says the blind man at the outset of this Billboard chartbuster that "sees" Stevie Wonder at his most sublimely playful. Where else do you find him acting the lounge lizard, oozing jet-set bona fides to some foxy mama he's mackin' on? From the opening Latin piano phrase and gleeful "Ee-eee!" on, Wonder's having a blast, playing a mellow mambo that speaks directly to your hips, then spices the salsa with typically Wonder-ful funk and jazz rhythms jacking up the dance quotient. His persona's "fluent Spanish" circles back with "Todo está bien chévere" (loosely, "Everything's real groovy") as the backing chant for a refrain that soars higher and gets more exuberant with every repetition. The groove is irresistible, and it invariably leaves me asking: What, me, worry? – Robert Faires


I saw Stevie Wonder in 1972, opening for the Rolling Stones in San Francisco. That was on the cusp of an astonishingly prolific string of five consecutive classic albums, starting with 1972's Music of My Mind and culminating with double-LP masterpiece Songs in the Key of Life. "Isn't She Lovely" stands out as an unabashed celebration of life itself, beginning with his daughter Aisha's first cry at birth. Four days after the birth of my own daughter Milana two decades later, I opened my Jazz, Etc. show on KUT with that song, dedicating it to her life. And each year on Milana's birthday, I play the song for her as a reaffirmation of my love. – Jay Trachtenberg


I'm through with love songs. Before you call me coldhearted, there's one song I keep going back to on Stevie Wonder's 4-CD career overview, At the Close of the Century, a near-perfect summation of his musical and lyrical genius. "As" opens in a sultry manner, subtly informing his paramour, "I'll be loving you always." He then introduces a backing chorus to emphasize the sentiment, doing so with a series of impossibilities ("Until the rainbow burns the stars out in the sky"). There's a vocoder passage emphasizing the positive over the negative, before Wonder repeats those impossibilities and quite a few more into a pumping, swirling coda. Thinking of writing another love song? "As" proves the subject is closed. – Jim Caligiuri