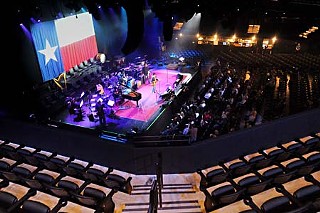 A week after its soft opening, the first act to grace Austin City Limits Live at the Moody Theater already constitutes a ripe trivia question. The answer's Choo-Choo Soul, Disney's li'l urban engine that could, which warmed up the "Fun-o-Meter" for Imagination Movers on Feb. 10. "That's the next generation of ACL Live fans down there," beamed the venue's general manager Tim Neece from the balcony.

Conforming to the U.S. Green Building Council's LEED certification, the $40 million facility has raised the bar for decades to come. It's basically a 2,750-capacity recording studio with custom sound helmed by Nashville's Steven Durr Designs and huge soundproof doors that seal off the main hall. A remote-controlled camera glides beneath the mezzanine level, while the backstage recording studio and in-house video editing room resemble NASA's launch room.

"Eventually I could see bands streaming their shows live, or [this] becoming a destination for live CD/DVD packages," noted Neece, almost giddy at the prospect. His guided, impromptu tour reiterated perhaps the theatre's biggest draw for both artists and guests – connection to the $300 million W Hotel. The Block 21 complex boasts restaurants and private bar areas, including one stocked to the ceiling with vinyl records, that offer a level of luxury rivaled only by Las Vegas casinos. Bands can actually navigate from their tour bus to hotel rooms and down to the stage without ever stepping outside. On Sunday and Monday, Feb. 13 and 14, Willie Nelson earned his forthcoming statue out front.

Backed by a 41-piece orchestra, Austin's godfather and his conductor David Campbell – also known as Beck's father – worked through their 1994 big band collaboration Healing Hands of Time almost in its entirety. Dressing Nelson's classic country & western songbook for a black-tie affair, Monday's concert, which was recorded for a future DVD, was eloquent and sophisticated, with the added treat of "Valentine" making even the seated audience buckle at the knees. And vinylly ... (Photo by John Anderson)

Scaled back to just four members of the Nelson Family Band, the second set bucked hard, with "Whiskey River" chased by "Still Is Still Moving to Me" – both demonstrating a rare outlaw tenacity. Fourteen greatest hits later, including a cover of "Me and Bobby McGee" that sounded like a country-jazz locomotive, half the orchestra rejoined the singer for the send-off, "Will the Circle Be Unbroken."

Nelson summed it all up before hitting the first note of the evening: "There's the Broken Spoke, and there's here."

• The new Austin City Limits backdrop, an updated version of the local skyline with a $200,000 price tag, will be unveiled at KLRU's fundraising gala with the Steve Miller Band on Thursday, Feb. 24.

• Along with Widespread Panic, ACL has confirmed tapings with Flogging Molly, Adele, and Mumford & Sons, according to The New York Times.

• Back in Studio 6A, ACL Presents Satellite Sets, the program's online side project, premieres as a monthly special on KUT tonight (Thursday, Feb. 17) at 9pm, featuring Monahans and Grand Champeen. It's a buyer's market for local real estate. Just ask Patricia Vonne. The local firebrand's the newest addition to Don Harvey's esteemed Austin Music Realty, a division of Stanberry & Associates. "They told me I entered it at the worst time, but in the music industry you have to be a master negotiator no matter how bad the business is," reasons Vonne, currently working on a follow-up to last year's Worth It. Inspired by her father's 30-year trek as a traveling salesman, Vonne took up her day job two years ago and is well on her way to earning that ubiquitous red blazer. Sin City's "Zorro Girl" – that's her brother, local filmmaker and Chingon guitarist Robert Rodriguez, behind the lens – also landed a lead role in Gentlemen Gunfighters, an upcoming motion picture about Texas gunslingers Ben Thompson and John King Fisher, with a soundtrack that already includes the Texas Tornados, Los Lonely Boys, and Raul Malo. Vonne anchors the For Clifford tribute at Antone's on Wednesday, Feb. 23.

You might not have guessed it from the actual television broadcast, but Austin had a huge night at the 53rd annual Grammys on Sunday. The Crazy Heart soundtrack, co-produced by the late Stephen Bruton, notched Best Compilation Soundtrack Album for Motion Picture, Television or Other Visual Media, spurred by Ryan Bingham and T Bone Burnett's "The Weary Kind," which earned Best Song in the same field. Local poster artist Rob Jones won Best Boxed or Special Limited Edition Package for his collaboration with Jack White on the White Stripes tour doc Under Great White Northern Lights, while recent Austin transplant Esperanza Spalding stole Best New Artist. Patty Griffin and Pinetop Perkins added to their trophy collections in the Best Traditional Gospel Album and Best Traditional Blues Album categories, respectively, but the real coup was DIY underdogs Grupo Fantasma taking home Best Latin Rock, Alternative or Urban Album for El Existential. "I wasn't even there; they only gave us four tickets so most of the band watched it at a truck stop in Flagstaff, AZ," writes guitarist Adrian Quesada, who caught the rest of the program crowded "into one grimy ass motel room" near a Navajo reservation. "That's the story of our lives, extreme highs and lows!"

Ume may soon be on the cover of Rolling Stone. The Austin power trio was selected as one of 16 unsigned bands to take part in the magazine's Choose the Cover competition, along with local unknowns Jamestown Revival. Finalists will compete onstage at Bonnaroo for a contract with Atlantic Records. Vote now and often: www.rollingstone.com/choosethecover. 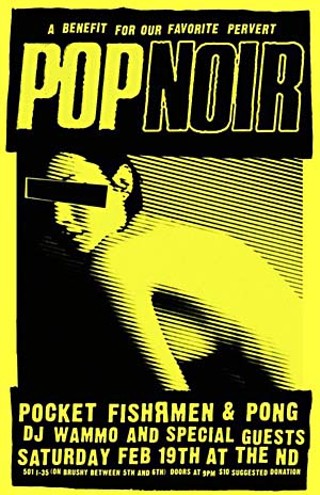 Poster artist Jason Austin, whose PopNoir productions branded the 1990s halcyon noise era, is suffering from advanced symptoms of multiple sclerosis. A benefit to offset his medical bills is taking place on Saturday, Feb. 19, at the ND at 501 Studios, featuring Pocket FishRmen, Pong, and DJ Wammo, plus an exhibit of Austin's work. "He was a whole trip unto himself, bringing a psychedelic mania to every show with his larger-than-life phantasmagoric paint, posters, and personality," enthuses show promoter Paul Minor.

Chronic snorer and OTR's colleague at 101X, Toby Ryan is running for City Council. Seriously. The longtime music director signed off the airwaves on Thursday and hired GNI Strategies to manage his campaign. His opponent, Place 4 incumbent Laura Morrison, has already countered with the development of an Austin Creative Industries Ambassador program, comparable to the position of the official State Musician of Texas.