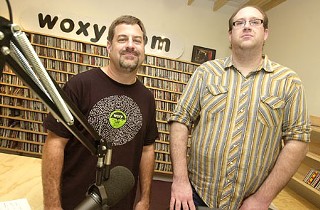 Just six months after relocating to Austin and a strong showing at South by Southwest, renowned indie Web radio station Woxy pulled the proverbial plug last Tuesday due to a general lack of funding. "There was nothing wrong with the move," assures co-owner John Mascarenhas of Future Sounds, the Caifornia-based multimedia company that acquired Woxy in 2008. "The issue was on the corporate side. This is a tough economic time, and we had a perfect storm of deals fall through that would have kept us going."

Woxy's no stranger to financial crisis. After leaving Cincinnati's FM airwaves in 2004, the station was saved by anonymous investors, only to be rescued once more two years later by entrepreneur Bill Nguyen of Lala.com. This isn't the end of the line either. Future Sounds is in the process of narrowing down sponsorship deals that have been offered since announcement of the cessation, with a goal of getting back online in April. The station is also exploring alternative revenue streams, such as syndication for its longstanding Lounge Acts series, which during South by Southwest alone included more than 15 sessions from artists including Sharon Jones & the Dap-Kings, Surfer Blood, and Frightened Rabbit.

"There's such a large overhead with royalty rates and live deejays that in order to survive, there has to be some sort of corporate backing; all content will have to be branded in some way," says Mascarenhas, citing Brooklyn's Viva Radio, which is owned primarily by American Apparel.

"The bigger question is if there's a place for the deejay any more," posits Woxy general manager Bryan Jay Miller, who likens most other Web radio stations to shuffled playlists. "That's what makes radio special. We're a curator, a trusted filter to guide you through a new experience." Good to see that Griff Luneburg has managed to keep his sense of humor. The longtime Cactus Cafe manager had listed hip-hop raunchers 2 Live Crew in the club's calendar, but that disappeared with the approach of April Fools' Day. No joke is "Wild Thing" Chip Taylor's recent protest single, "Jesus Christ, Don't Let the Cactus Fall," recorded live on KUT last month and released on his Train Wreck Records. Not to be outdone, the Travis County Democratic Party passed a resolution on March 20 demanding that the Texas Union board "commit to keeping the Cactus Cafe open in its present form, preserving its fundamental character, and keep the Informal Classes as an offering to the Austin com­mun­ity." Five days later, The Daily Texan reported that the Cactus boasted a profit of more than $12,000 for February. Then on Tuesday, UT's student government unanimously supported the proposal from the Student Friends of the Cactus Cafe, which called for artist-in-residence programs at the venue, student internships, retaining the club's current staff, and, if necessary, financial support from the nonprofit Friends of the Cactus Cafe. The resolution also asked University Unions management and the Office of the Vice President for Student Affairs to revisit its decision in light of the students' lack of input. While the Jan. 30 announcement by University Unions Executive Director Andy Smith to close or "re-purpose" the venue in August certainly contributed to the Cactus' current boom as reported by the Texan, conventional wisdom has it that the cafe can be a profitable enterprise, especially if bolstered by some sort of patronage program. Combined with efforts to more fully integrate the UT collegiate body, such as the student singer-songwriter competition on Tuesday, April 6, that seemingly leaves the Union board little ground to stand on, though that's not necessarily a deciding factor. Watch Kyle Henry's essential local documentary, University Inc. (see "The Last Picture Show," News, Jan. 23, 1998), which is being screened at the Texas Union Theatre for free on Tuesday, April 6, 7:30pm, followed by a panel on the Cactus' current plight. Maybe then you'll want to join the new Facebook group: Re-Purpose Andy Smith.

The roots of New Braunfels' newest watering hole and music venue, the Phoenix Saloon, stretch back to 1871. The bar then survived a variety of incarnations over the decades, as well as a fire in the mid-1890s that gave it its current name, before closing down in June 1918 due to Prohibition. It's where William Gebhardt invented chili powder in 1894 (his Original Eagle Brand Chili Powder is still available), and according to local legend, the ghost of original owner John Sippel haunts the second floor, where he shot himself in 1900. "Americans tend to underestimate their own history," posits co-owner Ross Fortune, who moved in 2004 to Austin from England, where he served as the music editor for Time Out London and contributed to Mojo magazine. After two years of renovations, refurbishing much of the original structural elements, the Phoenix reopened its doors in late February and has since hosted Dale Watson, Jesse Dayton, and Billy Joe Shaver. "The kind of music I used to write about back home," says Fortune. The Phoenix has a handful of ringers on tap for the coming weeks, including the Happen-Ins (April 3), Slaid Cleaves (April 24), Heybale! (May 1), and Tom Russell (May 7), while its underground lair, used by bootleggers during Prohibition, should open later this year. Given the bar's authentic Western saloon atmosphere, OTR half-expected to find Deadwood's Al Swearengen behind the bar last Saturday as Austin's Dirty Old One-Man Band Scott H. Biram testified with ramblin' blues and primal country back-hollers from his latest Bloodshot platter Something's Wrong/Lost Forever. For what's in most ways a one-horse town, it was a bit of culture shock, but for a New Braunfels native (yours truly), it never felt more like home.

South by Southwest left a bitter taste in the mouths of an unlucky few at Fat Wreck Chords' showcase at Emo's Annex on Saturday, March 20. Cokie the Clown, the deranged alter ego of NOFX singer/bassist and label head Fat Mike, opened his set by pouring shots of Patrón Añejo tequila for himself and the crowd, only to roll video later that showed him urinating into the bottle, corking it, and taking the stage. The Austin/Travis County Health and Human Services Department has turned the matter over to the Austin Police Department for investigation, and Fat Mike has been banned from Emo's, but thus far no complaints have been filed with the city. "I confirmed that urine was not classified as a biohazard waste and not subject to the legal ramifications of blood, semen, or feces," Fat Mike told TMZ.

If you missed the Octopus Project's Hexadecagon – a "16-sided audiovisual panorama" – performed at Whole Foods during the maelstrom of SXSW, fear not. "We're actually discussing the idea of taking Hexadecagon on the road, and we would definitely play Austin again," relates Octopus tentacle Josh Lambert. In the interim, Lambert says the Octopus Project will shape its fifth LP: "We could have enough material for a couple of albums."

Along with Mark Lanegan and Autolux, the Black Angels cameo on Where Did the Night Fall, the latest from London duo Unkle. The local psych troupe contributed vocals and effects via e-mail to the dense sci-fi drone "Natural Selection." "I've never worked that way before," relays singer Alex Maas. "It's a pretty cool honor." The lineup for the Angels' Austin Psych Fest 3 at Mohawk, April 23-25, meanwhile, is coming into focus. Recent confirmations include the Raveonettes, Silver Apples, Warpaint, the Warlocks, Yahowha 13, Pink Mountaintops, and Angels side project the Ghost Songs: www.austinpsychfest.com.