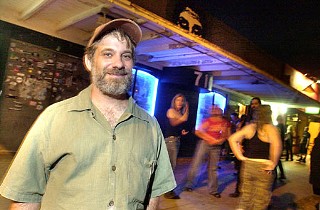 Down on the Corner: Asher Garber makes his last stand at Room 710 (Photo by John Anderson)

Between a Rock and a Hard Place

Barring some possible, pending business transactions, Room 710, the Red River institution known for its local noise rock eclecticism and as the birthplace of Tia Carrera's improvised pagan magic, will close its doors and begin the process of declaring bankruptcy on Aug. 2, if not sooner. "The fact that I didn't shut down during the smoking ban gave people the belief that we weren't scarred by it," laments owner Asher Garber, who officially parted from the club's co-founders, Woody and Adriana Weideman, the day the ordinance went into effect, Sept. 1, 2005. "Nothing further from the truth. We lost half of our business to that." Along with the difficulties associated with state taxes and skyrocketing property values, Garber also cited, among other things, his own inexperience and the recent closure of the Teacher Retirement System of Texas parking lot (11th and Red River) as reasons for the venue's woes, the latter greatly decreasing the amount of foot traffic in the area. One other notable factor, he added, was the booking "battle" between Transmission Entertainment and Emo's, which has made it difficult for smaller venues to stack comparable bills. While Transmission principal Graham Williams says he hasn't heard of any conflicts from local acts or talent agents, Emo's owner Frank Hendrix recognizes the strain the competition puts on other businesses. "In this genre of music, everyone up and down the street is doing it," Hendrix says. "We don't want to be at war, but we were forced in that position. We have to do what we can to survive." Room 710 cements its nine-year anniversary and local legacy with the celebratory 7-10 Days of Room 710, beginning next Thursday, June 18, with Mr. Lewis & the Funeral 5, Izzy Cox, and the Dirty Charley Band. "We've always been an insolvent institution, but it's finally come to a head," Garber concludes. "We're pretty indicative of the live music scene and the problems in the area."

Scratch that: School's out ... forever. (Photo by John Anderson)

In the wake of the May 29 shoot-up outside Spiros, which, as discussed at length in these pages last week, left eight patrons wounded, the Red River nightclub voluntarily turned in its license to the Texas Alcoholic Beverage Commission on Friday and permanently closed up shop. The decision came after a mandatory seven-day suspension of operation and effectively defused the Austin Police Department's nuisance-abatement investigation. "We're reacting the same way the neighbors are, 'Like what the hell is going on?'" says Spiros general manager Josh Cisneros, who stresses that the stabbing of promoter Ramone "Sicc" Stewart didn't occur at Spiros, contrary to the arrest affidavit for Wendon Earl "Gator" Candrick. "We were upset too, and no one is willing to go through the pressure that's involved with fighting the district attorney or TABC."

Born in the Honey

Erika Wennerstrom and the Black Angels' Alex Maas debuted their new side-project, Sweet Tea, during the Heartless Bastards' Austin City Limits taping last Wednesday. While the segment won't likely air – even the third take was a bit rough – the two locked into a seductive duet on "If I Were a Carpenter." According to Maas, the group recently tracked tape with local producer Erik Wofford for a 7-inch single that includes a cover of Ray Price's "Crazy Arms" to be released later this year by Fat Possum. "This will probably always be a studio project," enthuses Maas, who, along with fellow Black Angel Christian Bland, kicks off a new free-form residency at Antone's, Psychedelic Sundays, this weekend. "We really want to explore that old country sound."

Two of a Kind

Jon Dee Graham began his new Sunday night residency at the Continental Club Gallery, aptly titled Jon Dee Graham & Friend, with a simple premise: no rules, no rehearsals. "It's based on the presumption that with my ADD I can only handle one friend at a time," cackles Graham, who's currently recording a new album, It's Not as Bad as It Looks. The show is a rousing combination of sailor banter and spontaneous collaboration. Guests thus far have included Alejandro Escovedo, Bruce Robison, James McMurtry, Sam Baker, and Kelly Willis. Former Faces pianist Ian McLagan, who graces the Late Show With David Letterman on Tuesday, June 16, performed the first guitar-based show of his career with Graham, which, after a few rounds and threatened phone calls to Ron Wood, peaked with a stark rendition of "An Innocent Man." Kathy McCarty takes the hot seat this Sunday followed by Daren Hess.

Part of the program's appeal is the intimacy of the gallery itself, which could pass for the set of a 1940s gangster film – fitting, considering that's when the building was constructed. Continental Club owner Steve Wertheimer leased the space approximately three years ago but spent most of that time mummified in red tape over zoning changes to allow for alcohol sales and upping the capacity from nine to 49 people. The Gallery opened in March and hosts residencies every night of the week, including David Garza's Crybear (Mondays), the Ephraim Owens Experience (Tuesdays), Olivier Giraud (Thursdays), and rounded out by the Mike Flanigin B-3 Trio. The surrealist exhibit from Tony Nozero, formerly of Drums & Tuba, runs through the end of the month. Adds Wertheimer, "If you've got a fancy for pingpong, we have a table upstairs."

"We were a glorified, psychedelized bar band with the most incredible repertoire," reflects former Austin Sun writer Bill Bentley on fabled local outfit the Bizarros. "We had cover songs that no one else had ever heard, like 'Pointed Toe Shoes.'" Along with the late Ike Ritter, the Bizarros also had a legendary ringer in their corner, Velvet Underground guitarist Sterling Morrison, who played with the band for several years while attaining his doctorate at the University of Texas ("Velvet Underdog," March 17, 2000). Morrison is prominently featured on the band's only recording session, completed at Hole Sound in 1979 (see "They Call Me Hurricane," Sept. 5, 2008), which may be issued by Light in the Attic as part of a VU-related compilation. "I remember the sessions, but I don't think I ever heard the results; we cut six songs in one day," recalls Bentley, who's curated impeccable tributes to Roky Erickson (Where the Pyramid Meets the Eye) and Doug Sahm (this year's Keep Your Soul). "I remember packing out while Stevie [Ray Vaughan] was packing in to do another session with W.C. Clark." The Bizarros – Bentley ("Back Door Man," Dec. 17, 1999), Speedy Sparks, Moondog Bellamy, John X Reid, and Conqueroo's Charlie Prichard – bring out the ghosts this Friday for the Hole in the Wall's 35th anniversary week, along with Michael Hall's Savage Trip and the Wannabes.