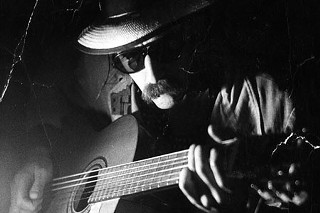 According to local director Kevin Triplett, Drunken Angel: The Legend of Blaze Foley opens with a trailer for a fictitious documentary, which glorifies the mythic status the eccentric songwriter has amassed since being shot and killed 20 years ago in Austin. The remainder of Triplett's film, which premieres this year at South by Southwest Film, attempts to unravel the mystery behind the duct-taped poet. "Blaze was a very complex character because he was so many things to so many different people," he says (see "A Walking Contradiction," Dec. 24, 1999). "He was a songwriter and a bum, very caring but a belligerent drunk. I tried to give enough clues for the audience to piece together who he might have been." A decade in the making, Drunken Angel features more than 100 interviews, including Merle Haggard, Gurf Morlix, Mandy Mercier, KUT's Larry Monroe, and Sybil Rosen ("Faded Love," Oct. 31, 2008), all of whom, with the exception of Haggard, served as advisers on the film. Not having seen the doc, OTR can't speak to its merits, but it does boast exclusive footage of Foley performing at a friend's wedding, along with unreleased living room recordings from 1976 and 1978. Triplett hopes a soundtrack will soon follow: "This is the best I could do at presenting the truth." Drunken Angel: The Legend of Blaze Foley screens Wednesday, March 18, 7pm, at the Austin Convention Center.

After the Gold Rush: Cinema-Speak

• Louisiana swamp-pop supergroup Lil Band o Gold – the subject of showcasing SXSW documentary The Promised Land – has been added to the bill at the Continental Club on Wednesday, March 18, 7pm.

• A preview of the documentary All Tomorrow's Parties is being screened at Emo's on Tuesday, complete with performances by Austin's Octopus Project, Sleepy Sun, Micah P. Hinson, and Australian post-punk saviors the Drones.

• Iron Maiden: Flight 666 is going to rule: The doc screens Wednesday, March 18, 7pm, at the Paramount and Saturday, March 21, 2pm, at the Austin Convention Center.

The Octopus Project, "An Evening With Rthrtha"

• IRS Records is digitally mining its vaults with a reissue campaign that includes the first four discs from beloved local synth-poppers Timbuk 3: Greetings From Timbuk 3 (1986), Eden Valley (1988), Edge of Allegiance (1989), and Big Shot in the Dark (1991).

• Arizona Stronghold Vineyards owner Maynard James Keenan, better known as the iconoclastic frontman of Tool and A Perfect Circle, will be at Whole Foods Market on Tuesday, March 24, for bottle signings, 4:30-7:30pm.

• The SIMS Foundation, the local nonprofit that provides low-cost mental-health services to members of the Austin music community, has kicked off its annual I'm With the Band benefit campaign. Donate or learn more at www.simsfoundation.org.

• Derek Trucks more than lived up to his birthright last Wednesday at La Zona Rosa, where he was joined by Austin's Bobby Whitlock at the behest of KGSR's Jody Denberg for a titanic romp through "Anyday" from the organ howler's former band, Derek & the Dominos. The 10-minute rave was worthy of inclusion on The Jams disc for The Layla Sessions box set.

• The final pieces to the 2008-09 Austin Music Awards, Wednesday, March 18, at the Austin Music Hall, have finally fallen into place. Local soul stirrers Nakia and Dan Dyer, who recently did a live taping for the PBS series Legends & Lyrics, presented by Songwriters in the Round, will serve as the male chorus to what OTR has deemed the Southern Sirens showcase, starring Suzanna Choffel, Carolyn Wonderland, and Ruthie Foster. For more on the awards, turn the page.

The Black Angels' Psych Fest captures the essence of communal exaltation, channeling original artifacts from the psychedelic era. This weekend the second annual happening expands to three days at the Radio Room (508 E. Sixth). The Angels host and headline on Friday, March 13, but the first night's real draw is local underground-psych survivors the Golden Dawn. Along with Bubble Puppy and the Zakary Thaks, the Golden Dawn is featured in Mojo's new "A-Z of U.S. Psych" (the Who issue) and reactivates its 1968 missive, Power Plant, in its entirety.

Saturday's headliner pairs garage rock pioneer Sky Sunlight Saxon of the Seeds with Austin's Shapes Have Fangs as World Spirits. "He's a giant influence, a musical idol," enthuses Fangs' singer/guitarist Dustin Coffey, who has a new vinyl split with Sunday's Cavedweller. "[Saxon] let us rummage through his vast catalog of songs to pick out what we want to play. We've been practicing for weeks now." Along with certified Seeds nuggets like "Can't Seem to Make You Mine" and "Satisfy You," Shapes Have Fangs have also rehearsed a few of Saxon's early doo-wop singles, recorded under the name Little Richie Marsh.

Elsewhere on the 13th Floor, Erickson resurrects Rokkervil, his collaboration with Okkervil River, for his annual Psychedelic Ice Cream Social at Threadgill's March 19, benefiting the Health Alliance for Austin Musicians and featuring the Heartless Bastards, Black Joe Lewis, and Ray Wylie Hubbard, among others. Meanwhile, Elevators' collaborator and former Waller Creek Boy Powell St. John (see "The Kingdom of Heaven," Dec. 22, 2006) visits the South Austin Museum of Popular Culture this Saturday, March 14, 7:09pm, commemorating the opening of his new art exhibit – surrealistic displays of sex, madness, and the vivid connection between the two – before his SXSW showcase at the Music Gym next Friday, March 20. The Black Angels' Alex Maas also turns on for the occasion.