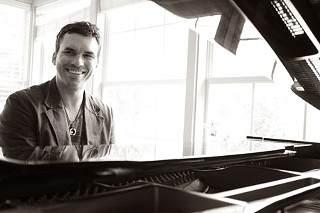 On a sticky Wednesday night in May, the sound of footsteps ascending the stairs to Momo's doesn't stop. Dan Dyer sits onstage at the keyboard singing "Anne-Marie," four minutes of funky piano and bass popping to the tale of a woman sent packing who then finds someone else. The song's monosyllabic coda is half-whispered, and no one claps until he says it.

The audience explodes into applause, especially the front tables packed with starry-eyed young women, a phenomenon evoking Bob Schneider's early years in Austin. That's not necessarily the effect Dyer courts, but it doesn't hurt that he's where all the girls go.

In a town full of guitar slingers and songwriters, Dyer's a singer. That puts him in a tiny local genre that includes predecessors Paul Ray, Junior Medlow, and Malford Milligan, all men who could play a note or two but sang it best. Dyer has the cool polish of a talent destined to make it, having worked with Lenny Kravitz and as one the hottest session vocalists in New York. At 34, with his second self-titled CD in hand ("SXSW Platters," March 7), he's even drawn comparisons to his heroes Stevie Wonder and Donny Hathaway.

Not bad for a kid who grew up in a real-life Friday Night Lights town playing football; he switched to basketball, then discovered he could sing.

Sometimes life defines itself by coincidence. If Dyer's parents hadn't divorced when he was a baby, he might not have been the fourth generation to attend Mabank High School. If Dyer hadn't transferred to nearby Malakoff High School, he might have never met a wild, fellow athlete he'd admired. If said athlete hadn't been Wes Berggren, who went on to form Tripping Daisy, Dyer might never have discovered his true talent.

"I was going to Mabank High School, where my great-grandma, my grandma, my mom and all her sisters, and my dad went to school," chuckles Dyer. "We didn't have much music, a little art, but from fifth grade on, you were prepared for football. Absolutely Friday Night Lights.

"All my friends were jocks. We played football, track, and basketball, but football was number one. We lived and breathed it.

"But I was burnt-out on football and wanted to play basketball. At a UIL competition at our school, I saw this guy who was like nothing I'd seen before. I was like, 'Who the fuck is that?' His hair was crazy; he was wearing crazy clothes.

"At Mabank, you couldn't have your hair below your collar. I looked and him and went, 'Shit! I wanna go where he goes to school!'

"Turned out he went to Malakoff High School. I ended up going to Malakoff and became best friends with the guy. He'd been playing piano since he was 5, had perfect pitch, and was a phenomenal guitar player. I was a sophomore, and he was a senior and had a full scholarship to the University of North Texas. So Wes Berggren goes to North Texas and ends up forming a band called Tripping Daisy.

"I'm still in high school, and he br-ings the lead singer, Tim [DeLaughter], home. I was floored. Wes was playing guitar, and Tim was singing, and I knew that's what I wanted to do. When I got to college, the first thing I did was open the paper and see what I could be part of. We were a cover band, but I didn't care.

"Tim is [now] the singer for the Polyphonic Spree."

If Dyer's dad hadn't remarried and lived near San Marcos, the singer might not have attended Texas State. If his cousin by marriage hadn't been Jimmie Vaughan's son Tyrone, the two might never have formed Breedlove in the mid-1990s. If he hadn't sung for Breedlove, he might never have been entrenched in the last of Austin's old-school rock scenes at Steamboat on Sixth Street. And if he hadn't been part of the Steamboat scene, he might not have the perspective on what's happening at Momo's.

"There was just something about Steamboat then," stresses Dyer. "And based on what I'm involved in, it's happening again at Momo's. It's a great thing happening there. I know 10 different bands that play there, and a good portion of them live together – not as bands but just friends. They sit in with each other's bands, play on each other's records.

"I've picked up gigs with them and sung on their records. Jeremy Nail, Dustin Welch, Nathan Singleton, Band of Heathens ... there's a lot happening, and it's reminiscent of the old days. Not only that; half of them are working at Momo's now, picking up money working the door or doing odd jobs, so it supports them and keeps the focus on music. Pretty amazing."

An e-mail from Dyer's publicist notes that "he's easy on the eyes and spirit." That's true as he bounces into the Broken Spoke. He radiates good health, confidence, and stardusted promise. Sunglasses parked in his dark curly hair, while for nearly two hours he free-associates over a plate of nachos. When he excuses himself, the waitress examines his CD.

"Easy on the eyes," she grins, walking.

Breedlove came along not long after Austin's once-vital blues scene was undergoing a face-lift as younger players such as Ian Moore, Guy Forsyth, and Charlie Sexton were coming into their own. Breedlove only took bare-bones elements of the blues; the rest was contemporary rock with a sinewy pulse of youth. 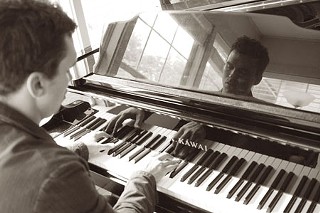 Meanwhile, Dyer's musical consciousness grew exponentially. Growing up, the singer's exposure to music was largely limited to country radio and a stack of his grandmother's LPs that "we weren't allowed to touch." A brief residence in Lancaster, Texas, offered him Dallas radio stations that thrilled him. ("I grew up with cowboy boots, big belt buckles, cowboy hats with a million pins, and the feather band.") Dyer's ear eventually led him in many directions.

"A girl gave me Stevie Wonder's Fulfillingness' First Finale on cassette," he nods. "It didn't leave my truck tape player for six months. I honestly think I learned to sing off that record alone. There are things on it that if you can wrap your voice around that, you're doing pretty damn good. I lived with that record – when I get into something, I don't want to hear anything else. I absolutely studied Stevie Wonder.

"And Donny Hathaway. People throw the word 'genius' around, but Donny Hathaway was. He held his own as arranger and composer, working with the Impressions and Roberta Flack. He was really diverse, a great example of a great artist of the era. Stevie Wonder, Marvin Gaye, Al Green ...

"Donny Hathaway might have been the heaviest of them all."

"Absolutely": The word punctuates Dyer's conversation. It's the perfect foil to "if."

If Dan Dyer's 2001 album, 12 Songs, had been released, his path might have been different after Breedlove split in 1999. If he hadn't moved to New York, he might never have catapulted himself to the top of the lucrative session-vocalist heap and met Lenny Kravitz. If Kravitz's production on Dyer's first solo release, Of What Lies Beneath ("Texas Platters," Nov. 5, 2004), had been more Dyer and less Kravitz, he might never have moved to St. Louis and started a family.

If St. Louis offered more of a musical challenge to Dyer, he'd be ruling its scene. If he hadn't returned to Austin and reconnected with producer David Boyle, the two might never have embarked on the project that turned into Dyer's new album.

And Dan Dyer is a blue-ribbon disc. At once joyous, creative, and satisfying, Dyer channels 1970s-era Hathaway and Wonder with modern panache and without a hint of mimicry. The 10 songs burst with Dyer's ripe flair for songwriting on "Stop for a Second" and his keen ear for arrangement (Dr. John's "I Walk on Guilded Splinters"), but it's the voice that sets him apart, especially on "Anne-Marie," where he slips into a wicked falsetto, then slides out of it.

"My big thing now is I want to be a great piano player," he laughs. "I've fallen in love with the piano, love watching great piano players. Personally, I've never been a big fan of the guitar. As an artist, singer, musician, whatever I am, all I'm trying to do is create something for me first. And then maybe for someone else."

Absolutely, no ifs about it.

"That was the last song completed in the studio, number 10, but it didn't have words," explains Dyer. "David Boyle was pushing me to write lyrics to it. At the 23rd hour and 59th minute, I scratched out the lyrics in five minutes. As soon as we finished it, he and I looked at each other and said, 'It'll be the most popular song because we put the least amount into it.'

"I gotta give credit to Larry Fulcher, who played bass on that song. He played his notes and then said, 'bitch,' at the end, so we knew we had to throw it in."

"When I lived in New York, all I did was session work," says Dyer. "I probably got in on the last hot streak, because that's changed now. There were so many people trying to get into it, but I had an agent who sold me hard. I walked into a room with all the badasses: Hall & Oates' guitarist, the drummer from Saturday Night Live. The first thing I did was a Diet Dr Pepper spot, and they were copping the T-Birds. They looked at me and said: 'We're doing this Texas shuffle thing. Uh, where you from?'

"It couldn't have been a better situation, and I nailed it. They went crazy and loved it. In the business, it was an absolute hit and got my foot in the door. Then I sang that Budweiser spot they used on the Superbowl, in the World Series, the NBA Playoffs. I ended up doing nine different versions of it. It played for two years.

"Once you've got one of those, then you've got the magic number: 'We want the guy that did the Budweiser thing.' And the Budweiser thing wasn't even like singing. It was talk-rapping. I'd make sure I got no sleep and drank coffee so that my voice would be terrible to get the character they wanted. After that they shoved me from Miller Beer to American Express. ...

"For a while, I had a lot of stuff running on television.

"Most musicians who do that are burned-out, or they're Berklee graduates, and that's what they intended to do – write jingles – because it makes a ridiculous amount of money. What it did for me is that I still own my publishing, never had to sell it. I know how to do a publishing deal. When it came time to negotiate a recording contract, I didn't need anyone. Compared to where I came from, I was making an insane living." 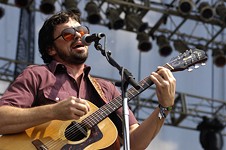 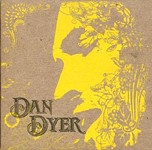