Darondo: not a pimp, not a myth 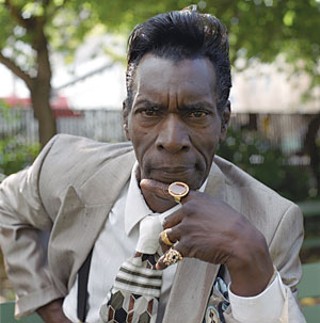 
Three years ago, only dedicated soul aficionados and Bay Area record collectors had ever heard of William Daron Pulliam, 60, otherwise known as Darondo. Hell, Darondo himself hadn't even heard his music in 30 years. That all changed when British DJ Gilles Peterson included Darondo's rare 1973 single "Didn't I" on a 2005 compilation.

The string-laden track is sublime, with Darondo's falsetto recalling a rawer Al Green, a rougher Ronald Isley. Music was only a hobby for Darondo, who released three 7-inch singles and performed only a handful of shows, including an opening spot for James Brown in Berkeley, then promptly left music in his rearview mirror. The singer was still cruising Bay Area boulevards, though, in the flashy car that earned him his nickname.

"They used to call me Rolls Royce Darondo," he says. "At that time people were buying Mercedes Benzes and Cadillacs, but I didn't want neither one of them because my stroke is all the way different."

His taste for fancy cars, gold jewelry, and pretty women earned him a reputation. Most in the know will tell you that Darondo earned his living as a pimp, a claim he denies.

In the late 1970s and early 1980s, Darondo appeared on several Bay Area cable TV shows recorded in his Oakland home. Upstairs housed Darondo's Playboy Penthouse After Dark, while downstairs he filmed Tapper the Rabbit, a children's show where Darondo dressed in a bunny costume. Ubiquity Records released Let My People Go in 2006, a compilation of Darondo's known recordings. His December 2007 concert in San Francisco was his first in three decades.

"I flashed back about 30 years – it was out of sight!" Darondo exclaims. "I was feeling so good I forgot how old I was and did the splits!"