In Her Own Time

The return of Karen Dalton 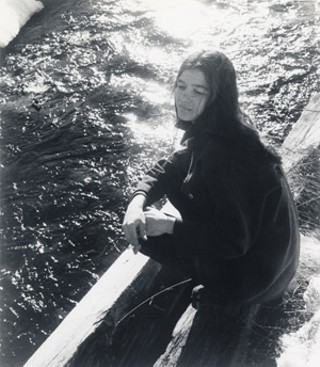 "My favorite singer in the place was Karen Dalton," writes Bob Dylan on p.12 of Chronicles: Volume One. "She was a tall white blues singer and guitar player, funky, lanky, and sultry. I'd actually met her before, run across her the previous summer outside Denver in a mountain pass town in a folk club. Karen had a voice like Billie Holiday's and played the guitar like Jimmy Reed and went all the way with it. I sang with her a couple of times."

Besides a possible early-1960s love interest of Dylan, Karen who?

"All of us in the Bad Seeds were huge Karen Dalton fans," says Nick Cave in the liner notes to the 2006 reissue of Dalton's second and last album, 1971's In My Own Time. "We had this friend, Mick Geyer, his life's adventure was to seek out art and music in life that was wonderful. Part of his job was to open our minds to things, and we met him in the punk rock days when we were ready to chuck everything out the window. He liked a lot of jazz music, and different things, and he was always very much like, 'Yeah, get rid of that, but don't get rid of this, listen to this, listen to this.' 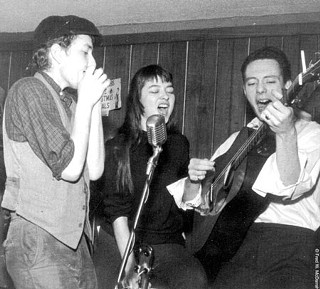 It’s Not So Hard to Tell Who Loves Karen Dalton: (l-r) Bob Dylan, Dalton, and Fred Neil at the Cafe Wha? in 1961 (Photo by Fred W. McDarrah)

"Karen Dalton was one of those people."

Along with In My Own Time's shamanistic introduction from Patti Smith guitarist and music scholar Lenny Kaye – and a "poem" from Devendra Banhart – that's giddy praise for a woman who didn't perform after the mid-1970s and died of AIDS in 1993.

Dalton's voice has that effect on people.

"She sure can sing the shit out of the blues," is how folk godfather Fred Neil put it. 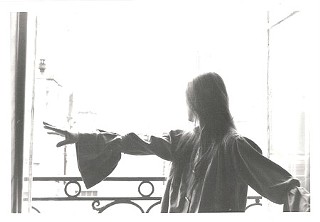 A forlorn cry from the abyss, she doesn't have to dig deep for the blues. The blues are Karen Dalton. She makes other singers sound like frauds.

"She understood the blues better than the folk singing milieu she was hanging out with," furthers Cave. "Absolutely. She's a blues singer to me. It's full of idiosyncrasies that you can't repeat – it's in her voice and it's just extraordinary. She is my absolute favorite blues singer – female blues singer, let's say."

Let's. Following Seattle indie Light in the Attic's deluxe treatment of In My Own Time ("Reissues," Dec. 15, 2006) came Delmore Recordings' 2-CD live set, Cotton Eyed Joe ("Reissues, Dec. 14, 2007), previously unheard hauntings from her residence in Boulder, Colo., in 1962. Dalton's 1969 debut, It's So Hard to Tell Who's Going to Love You the Best, completes the triumvirate of her recorded output thus far. That's the easy part. Digging for the story of Karen Dalton's life, by contrast, takes on the specter of chasing ghosts.

The original bio for In My Own Time notes a passport that "says she's from Texas," but better sources claim Dalton was originally from Enid, Okla., her mother full-blooded Cherokee. She turned up in Greenwich Village in the early 1960s, at the height of the folk revival, with her 12-string Gibson guitar, a long-neck banjo, and her otherworldly vocals. She immediately drew attention from the aforementioned folksinging milieu. Around the same time, she could also be found in Boulder. 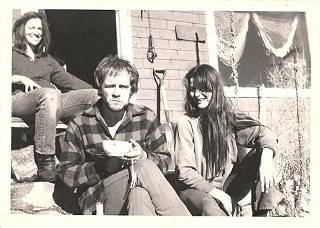 "A nice little cow town with a university," says Joe Loop of Boulder back then. Loop operated the Attic, a homey coffeehouse where he occasionally ran tape on the proceedings. Cotton Eyed Joe comes from his personal collection. "In 1961, the folk thing was starting to happen, blossoming on the two coasts. People would come through looking for gas money, and some of them stuck around. Most of the people who played at the Attic were from the University of Colorado, but Karen was an experienced performer and had her stuff together.

"It's amazing how many musicians would go out of their way to play with her back then. She played with all the best people: Fred Neil, Tim Hardin, Dino Valenti. All those people loved her and loved playing with her, but it wasn't the kind of stuff that the record labels were looking for."

A combination of stage fright, drug and alcohol problems, and the fact that Dalton didn't write her own material didn't help. She also had difficulty in the studio, all but hoodwinked into recording her first album. Producer Nik Venet had tried unsuccessfully to record Dalton, so he invited her to a Fred Neil session and asked her to cut Neil's "Little Bit of Rain" for his own private archives. She cut the entire album that night, most of the tracks in one take.

Covering the breadth of her character, Dalton's Capitol Records rollout includes tunes from Neil, Hardin, Jelly Roll Morton, and Eddie Floyd & Booker T. Jones. While not a commercial success at the time of its release, It's So Hard had been reissued twice in the past decade, by Koch in 1997 and the French Megaphone label in 2006.

Photo courtesy of Light In The Attic

The Holy Modal Rounders' folk subversive, Peter Stampfel, who played with Dalton, seems to capture her essence perfectly in the liners to the Koch reissue when he writes: "She was the only folk singer I ever met with an authentic 'folk' background. She came to the folk music scene under her own steam, as opposed to being 'discovered' and introduced to it by people already involved in it."

Today, by phone, Stampfel recalls Dalton with a resigned bluntness.

"We hung together from 1969 to the mid-Seventies, performing rarely. We'd take amphetamines and rehearse a lot. That band played maybe three gigs. She used to shoot amphetamines. Then, like a lot of people when they get older, she turned into an alcoholic."

Stampfel remembers that Dalton had been in the hospital just before In My Own Time, recorded in Woodstock, N.Y., with Electric Flag bassist and Dylan/Miles Davis sideman Harvey Brooks directing a select group of sessionistas. Dalton tackles Motown classic "How Sweet It Is (to Be Loved by You)" and "In a Station" by the Band's Richard Manuel, and while the album's full production is disorienting, it recalls the early work of one of Dalton's contemporaries, Bonnie Raitt: commercial, bluesy, singer-songwriter-friendly. Dalton's ragged vocals commanding the orchestrated surroundings are singular if nothing else, and all agree that the stark reading of the traditional "Katie Cruel" is haunted beyond words. 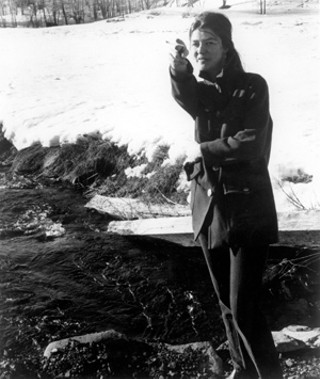 Woodstock Festival co-promoter Michael Lang put out In My Own Time on his Just Sunshine imprint and then arranged for Dalton and band to tour Europe as the unlikely opening act for Santana. During the trek, they played Montreux, and she never made it out of the dressing room. Acoustic guitarist Dan Hankin, who backed Dalton from 1965 into the early 1970s and appears on both studio albums, remembers the ups and downs all too well.

"She was just falling prey to her own demons and drug abuse," he says from his home in Colorado. "Before we went on this European trip, she bought me a guitar. After that trip, she went back to Woodstock and was trying to get another band together. She invited me to join her, and after several weeks with nothing happening, I started saying, 'When are we gonna rehearse?' I had to leave because I had a life elsewhere, but she didn't want me to leave.

"After I got back, she called me up in the middle of the night and demanded that I send her the guitar back. I sent it back and never spoke to her again."

Hankin can be seen in the DVD that accompanies Cotton Eyed Joe as well as the French release of It's So Hard. Only four songs and less than 15 minutes long, it captures Dalton onstage in New York and in the Colorado mountains circa 1969-1970. It's a thrill to see her perform, missing a couple of teeth, and with waist-length brown hair and the shadow of a smile, Dylan's description of her as sultry is more than apt.

"She was living in the mountains outside of Boulder," explains Hankin, "in a little old mining cabin without running water and an outhouse. I sort of inherited that cabin when she left. It was only $30 a month. The scene I was in with Karen was very low-key. It was people who weren't in the mainstream of society. We mostly played in living rooms or in tiny little bars for drinks."

Until three years ago, few besides Joe Loop even knew that the footage from a French film crew following Dalton at the time even existed. Nick Cave has Joe Loop to thank for even more: He sold his entire collection of Dalton tapes to the Megaphone label, which is planning another release later this year. There's more Dalton than live Attic recordings, too.

"Other stuff was recorded at someone's house," reveals Loop. "One was from 1963. They're just personal recordings, some string-band-type stuff. What's going to be released next is where she accompanies herself on banjo."

Though Dalton disappeared from the public eye soon after her sophomore release, it's a fair guess that she continued to play in living rooms, out of the spotlight. While Lenny Kaye describes Dalton's last days as "living on the New York streets, destitute, her health gone," Peter Walker sets the record straight.

"Let me put to rest these ideas that she died in destitute poverty and drug addicted homelessness," he states. "She was perfectly functional mentally. She was living in Hurley, in upstate New York between Kingston and Woodstock. She lived with AIDS for more than eight years, but with an excellent quality of life considering the disease."

A guitarist of some renown in the 1960s of the Cambridge, Mass., scene, Walker once directed music for Timothy Leary's infamous "celebrations," in which the guru would rant to acid-drenched audiences of thousands. He met Dalton early in the decade and remained friends with her until her death.

"Karen was part of the crowd that hung around with Tim Hardin," he recalls. "They all loved her because she was the cover girl for the Ode Banjo company, the most traditional of instruments available only through mail order."

Walker spent time with Dalton in the 1980s when she had an apartment in the Bronx and he worked in New York City. He became her caretaker later, offering her a place to live when the disease had nearly won. He maintains he has her diaries but admits that a box of tapes she left behind was destroyed in a fire.

Delmore Recordings' Mark Linn, who guided Cotton Eyed Joe onto the market and played an enormous role in this story, ultimately delivered the most poignant reflection on Dalton.

"There's a small amount of people that have the original records [who] were intensely affected by them – by her voice," he offers. "I think you can really feel the pain. She lived a hard musician's life. It wasn't about trendiness or stardom. It was about playing music.

"She wasn't really made for her time." 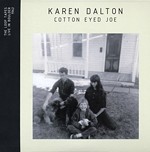