From stage to screen with Gary Clark Jr. 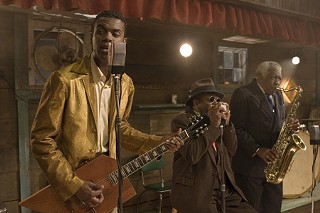 When noted film director John Sayles and his longtime partner and producer Maggie Renzi presented Gary Clark Jr. with a plaque for Best Blues Band at the 2006-07 Austin Music Awards, the three had a little secret the audience didn't know: The local bluesician was the star of Sayles and Renzi's then-upcoming film Honeydripper.

Distinguished in American independent cinema by his beautifully crafted stories and characters, Sayles' films such as Eight Men Out, The Secret of Roan Inish, City of Hope, and Limbo glow long after the theatre lights have come up. With seminal works such as Matewan, Sunshine State, Lone Star, and Passion Fish, the writer/director/editor has also demonstrated his affinity for portraying a complex Southern culture free of cliché. Sayles remains a total-immersion filmmaker, as well, lighting up the big screen in small roles and regularly doing his research in bars and nightclubs. That affinity served him well when Honeydripper came to life.

Set in 1950 and filmed in Greenville, Ala., which passes for the fictional town of Harmony, Honeydripper takes place in the waning days of the Jim Crow South. Cotton farms and the local Army base keep the tiny town alive but just barely. On the outskirts, Tyrone "Pinetop" Purvis (Danny Glover) struggles to keep his juke joint, the Honeydripper, open. Purvis is a piano-playing fan of old-school acoustic blues mama Bertha Mae (marvelously portrayed by Mable John), but the rowdy jukebox of rival club Ace of Spades is siphoning his clientele.

Deeply in debt and facing threats of a buyout, Purvis decides to fight for his club's life, dispensing with Bertha Mae to try something new with the legendary Guitar Sam. But Sam doesn't show. He's sick in the hospital, according to a blind street musician named Possum, a kind of Greek chorus character played by Sony's longtime acoustic bluesman Keb' Mo'. Enter Sonny Blake (Gary Clark Jr.), a brown-eyed, handsome man fresh out of the service and looking to gig. Sonny could be the answer to Purvis' prayers except for one thing: He plays the newfangled electrified guitar.

That's where Sayles and Renzi's love for music pays off. Their search for the right person to portray Sonny, an allegory not only for change but of the future – the heralded birth of rock & roll – landed the filmmakers at the Continental Club during South by Southwest 05. Gary Clark remembers the night well.

"John and Maggie approached me after the show and said: 'We enjoyed your performance and have this project. How would you like to do a reading?'" recalls Clark. "I knew what a reading was – I have friends who are actors – so I went to read in the morning with John and Maggie. I was a nervous wreck. I sat there and read some lines back to him. A little while later, Maggie called and said, 'We'd like to offer you the part of Sonny.'"

Shortly thereafter, the Austin-born singer/guitarist was flown to Alabama for a five-week shoot and the experience of a lifetime. "There's videotape of me playing Prince Charming in my eighth-grade musical play, dancing in tights and things like that," winces Clark. "Those lessons prepared me. I've been around movie sets, but it was still a huge production, even for a small independent film. What tripped me out was how many people watched. There are two characters but 30 people around you, moving lights, booms, stands. It was crazy, and it happened so fast.

"On the plane back, I thought, 'What just happened?'"

Sonny Blake wasn't necessarily a stretch for Clark, but it did require him to think outside himself for the character's personality and desires. "I thought, 'What would I be doing in 1950?' I'm fortunate to be in Austin with the support I have, outlets, and lots of opportunities, but I think this is what I'd have been doing 50 years ago, kicked out of the Army, hungry, looking for a gig. So I tried to draw on that struggle. There's more of a struggle for Sonny than me.

"Me, I went down to Babe's [originally] and was welcomed onstage, and it went from there. Yet in the movie, they don't want Sonny around. He's a joke because he wants to play this electric blues guitar, and Danny Glover's character doesn't want it.

"But to play a character who played that kind of music? That was easy."

Besides the crash course in acting, Honey­dripper was a college of higher musical education for Clark. He played alongside cast members such as the Mississippi-born harp player from the Bluesmasters, Arthur Lee Williams, plus former Raelette and soul shouter Mable John and tenor saxman Eddie Shaw, one of the last of Howlin' Wolf's band.

"Working with Eddie Shaw was like jumping back in time," enthuses Clark. "To be in an Alabama juke joint with Dr. Mable John, Arthur Lee Williams, and Eddie Shaw – who played spots like that when they were my age – was so authentic. In an eerie way, I felt like we lived that transition all over again."

Shaw's voice bears the growl of countless nights honking sax in smoky bars as he compares the story of Honeydripper to his own life. "I experienced all that," says Shaw from his home in St. Louis. "I've been through trying to get the right crowd, trying to draw people in from the street, trying to lure people over from the other club. I've been through the shootings, the guys coming in with pistols and guns and knives. I could have wrote that movie. I've lived it."

To Shaw, there was nothing different about performing in front of cameras than playing for a club audience, but recent performances by the Honeydripper musicians are special. That the latest shows are here in Austin ices the cake. "Yeah, I'm the tail end of the Wolf gang," Shaw recalls with a sigh. "Haven't been to Austin since way back when Clifford [Antone] had that joint on Sixth Street. It's been a long time since I played there."

Making the band's pair of Austin performances even more special is the presence of Shaw's bandmate and longtime friend Hubert Sumlin at the Antone's show on Wednesday night. The two played behind Howlin' Wolf for 13 years, and Shaw looks forward to taking the stage with both Sumlin and Clark.

"Gary's a newcomer to everything," acknowledges Shaw, "but he's gonna be one of the guys in the future they'll look back to. He's a good kid with a good personality and his head screwed on right."

"That transition, that moment when the guitar was electrified from the Mississippi Delta sound, that's what it's about," proclaims Clark. "Piano guys were up front, and the guitar guys were in back; then guitar blues turned electric and eventually became rock & roll. Keb' Mo's character, Possum, is that Mississippi Delta-Alabama blues-pickin' guy. He's like the spirit of the music, lingering there while the music boils in the pot and resolves in the end."

The conversation stops for a moment, but Gary Clark Jr. doesn't hesitate.

"If I could do another film, I'd do Honey­dripper all over again."

On Tuesday, Jan. 22, Gary Clark Jr. and Eddie Shaw follow the Para­­mount Theatre premiere of Honeydripper (See "'Honeydripper' Drops on Austin") with a performance at the Continental Club; a limited number of tickets will be available to the public. Open to all, Clark and Shaw, along with Muddy Waters veteran Pinetop Perkins and Howlin' Wolf alum Hubert Sumlin, perform at Antone's the following night, Wednesday, Jan. 23.