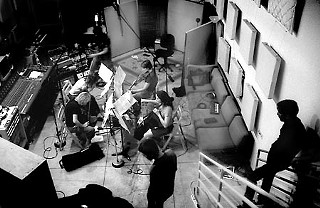 "If you work with them, you can't go back," grins Voxtrot frontman Ramesh Srivastava about the four professionals in Tosca String Quartet. After recording a track for the band's Your Biggest Fan EP, Tosca returned to the indie-pop quintet and splayed beautiful depth all over their debut full-length. The emotion evident on Voxtrot wouldn't be possible without them.

"We know so many different people," says Asbell. "We'll meet somebody who is into all these different genres of music, and if they ever think of strings, they think of us. It's a small social network here in Austin. It makes it easy for us not to get stuck in [a genre]."

Tosca recorded strings for Voxtrot during this year's winter storm, as sheets of ice slipped from the rooftops and space heaters warmed Erik Wofford's Cacophony Recorders. The result is a mellifluous mix of birdcalls ("Ghost") and explosion ("Brother in Conflict"). Tosca imprints the album with a necessary magnitude, and when the women join Voxtrot onstage at Emo's and at New York City's Webster Hall in June, look out.

June also takes them out with British songwriter Heather Greene, but for now, Tosca remains in Austin, playing this Saturday, May 19, at Auditorium Shores for Stephen Bruton's Road to Austin concert. They'll string alongside Bonnie Raitt, Kris Kristofferson, Eric Johnson, and Bob Schneider, among others, offering delicacy where it's deserved.

"If you look at our lives, they're full of variety," says Seeger. "A lot of rock and a lot of tango. We have a nice balance of both worlds."