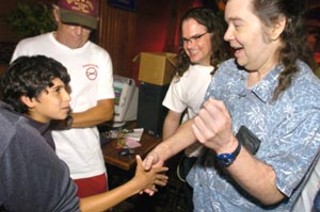 Maybe it was drinking beer from plastic cups, but Sunday's benefit for Longbranch Inn co-owner Kevin "Kumbala" Crutchfield felt more like a party. The sight of numerous bathing-suited Texas Rollergirls – recently featured alongside their Lone Star rivals in both Spin and The New York Times, and who raised around $250 at their charity car wash next door – certainly didn't hurt. Musically, the crowded Eastside watering hole hosted some of the sharpest sets "TCB" had seen in a while. There was whimsical Tin Pan Alley bluegrass from Shorty Long, blistering butt-rock courtesy of the New Disciples, the Bloody Tears' skillet-fried soul, and the incomparable Pong, who tacked on a strangely Skynyrd-like coda to their trademark sci-fi funk. Pong drummer Lyman Hardy said the quintet is close to finishing the follow-up to 2001's Killer Lifestyle, whose title cut has taken on added resonance this suicide summer. Lately even the most benevolent, laid-back gathering is apt to be laced with tragedy, as it was when "TCB" learned Mark Davis, brother of Monday-night Longbranch fixture Bill Davis, had killed himself the night before. He was 32. A memorial is scheduled for 2pm Saturday at Wilke-Clay Fish Funeral Home, 2620 S. Congress. "TCB" extends deepest sympathies to the Davis family.

Last month's announcement that Austin Community Television and the Austin Music Network had agreed to fold AMN into ACTV sounded too good to be true. So naturally, it probably was. Last week's Telecommunications Infrastructure Subcommittee meeting was inundated with ACTV producers, who expressed major misgivings about the AMN/ACTV proposal – starting with the fact that it doesn't exist, at least not on paper. ACTV producer Stefan Wray, thinks Austin's public-access airwaves are too important to leave to an oral contract. "There's no written agreement as far as we know," he said Monday. "It could be there are e-mail communications." Further bothering the producers are concerns over potential conflicts with ACTV's noncommercial charter, the fate of AMN's $1 million in equipment, and a general feeling that the merger could lead to the city, and not its citizens, holding ACTV's reins. "You can't have city government dictate to the stations what programming to put on," Wray said.

Piracy is normally a dirty word in the corridors of Dell Computer's Round Rock headquarters, but thanks to the Jolly Garogers and Mix 94.7's JB & Sandy morning show, Dell learned piracy can be fun, too. After seeing the Garogers at a Lonestar Rollergirls match and pronouncing them his "new favorite band," Mix jock Sandy Rivers commissioned the motley crew for a remake of AC/DC's "Highway to Hell" as "Highway to Dell," recorded at Arlyn with Broken Teeth's Jason McMaster on lead vocals and Rivers singing backup. Listener response to the song on Monday's JB & Sandy show was so positive, relays Garoger Captain Phleabag, that now he wants to play the Dell parking lot. Here's a few more to help fill out the setlist: "For Those About to Round Rock," "Ain't No Fun (Waiting 'Round to Be a Dellionaire)," "Net Prowler," and naturally, "Dell's Bells."

If there's anyone who can appreciate the Afghan Whigs' "What Jail Is Like," it's Ignorance Park frontman Johnny Walker, who recently returned from seven weeks in the Poplar Bluff, Mo., gray-bar hotel after he and bandmate Bobby Chapa were busted with 100 pounds of marijuana ("TCB," Music, June 18). Before hopping a Greyhound for a court appearance back in Missouri, Walker sat a spell at a bus stop outside the Longbranch Inn Sunday.

You don't have a lawyer right now? Johnny Walker: Not right now. Hopefully I'll be able to do that, but if I don't, then they throw me back in, because you have to be in jail to have a public defender.

JW: Yeah. We have benefit shows planned, but they'll be after the deadline. But my hopes are high. I've got faith, so hopefully it's gonna work out all right.

JW: Pretty much like being in a closet. I guess there had been windows in the building previously, but they'd melt the window and pull drugs through. A couple years ago, the sheriff decided to weld half-inch-thick steel over the windowsills, blocking the windows out entirely. There was no sunlight at all.

TCB: You said you wrote some songs in there.

JW: Yeah, a lot. It was good for that. I didn't have anything else to do. I don't think I've written as many songs in such a short period of time.

TCB: How are things between you and Bobby?

JW: Things are good. We've known each other since I was 14 and he was 12. There was a lot of spin on things, this and that, but we're good, man. He's my brother. We're all gonna get through this OK.

Post-Parlo Records owner Ben Dickey has moved to Chapel Hill, N.C., following the merger of his Falsetto Booking Agency with Ground Control Touring, which books Belle & Sebastian, Spoon, the Yeah Yeah Yeahs, and the entire Saddle Creek Records stable. Dickey, who also manages Crooked Fingers and Mates of State, will continue booking Austinites I Love You but I've Chosen Darkness, Explosions in the Sky, Okkervil River, and Zykos, whose second LP is due Oct. 4 on Post-Parlo.

Chilly post-punk provocateurs A Tiger Named Lovesick are going on ice as bassist Alex Ramirez relocates to Tokyo. As a parting gift, Tiger's second album should be in the can by the time Ramirez leaves following a Sept. 5 send-off show at Beerland with This Microwave World and Dead Whale Tide.

Song of the Year (so far): Hollowpoint's "Baby Mama." A UPN sitcom waiting to happen. 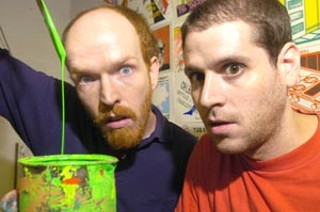 Anatomy of a Poster

Curious how a poster goes from an idea to your wall, "TCB" marinated at the AC-less Bearded Lady shop with proprietors Josh Chalmers and JD Fanning last week. Once they get the artwork, Chalmers explained, their laser printer prints out separations, one sheet per color. Each sheet of film is carefully taped to a screen treated with photo emulsion and exposed to light, then rinsed thoroughly; the emulsion washes off the places covered by the ink on the film. Mindful that "you can have an error in so many places," as Chalmers says, they line up the screen with the posterboard on their pressing table, squeegee the ink through – the ink is so noxious they wear respirators – and place the poster on nearby drying racks, repeating as many times as they have screens. Chalmers estimates an average poster run at 75-100 for bands, half that for clubs. Bearded Lady also prints T-shirts, notecards, wrapping paper, menus for Stubb's, and the cover art for Tia Carrera's forthcoming disc, which the terrible trio releases Aug. 19 at Room 710. For the ladies, Bearded Lady's pretty pink Tia panties will be available on the merch table.