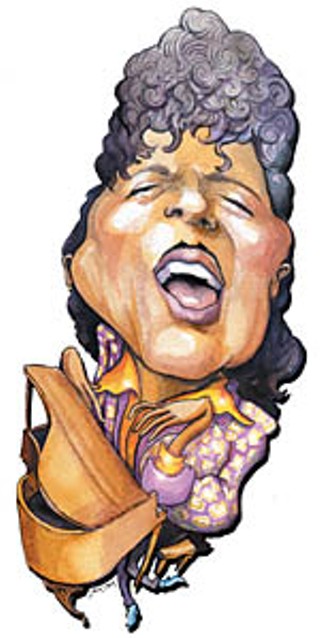 If Carl Perkins and Elvis brought country music down from its hillbilly haven and transformed it into rock & roll, surely Little Richard and Chuck Berry did the same from the R&B end of the spectrum.

That statement, however, does nothing to address the rest of what Macon, Ga.'s Richard Wayne Penniman was about in the mid-Fifties. The pop culture shift from Patti Page and the Four Freshmen pap to a piano-pummeling, make-up-wearing, howling maniac was something that must have had adults of the era thinking the cold war meltdown was just around the corner.

Indeed, Pat Boone's bowdlerized, vanilla versions of Richard's shouters were outselling the originals for a brief time as deejays, record execs, and other various powers tried to hold back the inevitable, but Richard and everything he represented was unstoppable.

It's hard to imagine anyone coming along now and shaking things up the way Little Richard and his contemporaries did nearly a half-century ago. Richard, of course, walked away from rock more than once and took the righteous path of Jesus, but in the long run stayed true to his roots as a rock & roll singer.

Through the Sixties and Seventies, he continued making underrated funk and soul, some of which can be found on Sony Legacy's new Get Down With It: The Okeh Sessions. He's now past 70, but a Little Richard performance is still a rousing, manic good time, not something dusted off and hauled out of the oldies bin. So if "Good Golly Miss Molly" and "Tutti Frutti" don't get your blood up, consult your physician.

Austin Chronicle: We're very excited about having you as both keynote speaker and a SXSW performer this year!

Little Richard: Yeah, you know I'd not heard of that until this year. I'd been invited before but never was available to do it.

AC: I saw you at Gruene Hall several years ago, and you said you were retiring then.

LR: Well, I've not really retired, but I don't do as much as I used to. I have people that have been with me a long time, and if I just completely quit, they'd be in a bad fix. It's not easy to find good jobs.

AC: I was listening to the new Okeh disc ...

LR: You mean "Poor Dog"? I love "Poor Dog." "Self preservation is the first law of nature"... and "Don't Deceive Me," Chuck Willis' old song.

LR: Maybe just a little bit earlier, Jimi was with me then, yes.

AC: I'm sure you could see the potential.

LR: Oh, he was unbelievable! I liked him because, you know, we both had the high Indian cheekbones. We used to say we were brothers; I'd wear the headband too. He liked the way I dressed. And he was playing more blues then, you'd think he was Muddy Waters.

LR: Well, Brian Epstein's dad had record shops in Liverpool, and they brought me there. The Beatles weren't famous yet; he wanted them to meet someone famous. I took them with me to Hamburg, Germany, to the Star Club, and we stayed there for two weeks, with them opening the shows for me, Gerry & the Pacemakers, and the Swinging Blue Jeans.

Mick Jagger was touring with the Rolling Stones, and they were all sleeping on Bo Diddley's floor. It was me, Bo Diddley, and the Everly Brothers. Mick was just beating a tambourine and [the Stones] weren't famous then either. Then about a year after that tour, that's when all that really started happening.

AC: Your earliest singles were like jump blues with the horn section. What was the moment when you made the move from that to rock & roll?

Then one time in the studio we didn't have enough songs, and I showed the record company what I had and boy, they had a fit! The man said, "Man, what is that? Let's go back in the studio and do that!"

LR: Yeah, '55. "Tutti Frutti" and all that. I just didn't think anybody was gonna like it!

AC: Who were your earliest influences?

LR: Gospel. Mahalia Jackson, Brother Joe May, Marion Williams, Ruth Brown, Roy Brown, Fats Domino. Fats wasn't singing rock back then, he was singing low down blues songs like "Every Night About This Time." Fats never got the credit he deserved. He's an unbelievable piano player! He makes the piano talk! Little bitty fingers, too! He's one of my favorites.

AC: What about New Orleans' Esquerita, who some folks call the "original" Little Richard?

LR: I met him back [in Macon, Ga.]; he was playing for a Pentecostal minister named Rosa Short. He was a good pianist, but he was no Fats Domino.

AC: He was so flamboyant for that time ...

LR: Ehh ... not at that time he wasn't. I was, he wasn't. He really got it from me; Dr. Rock said I got it from him, but Dr. Rock doesn't know us, he lives in England! He got it from me! He came to my hometown and was playing in a church. He couldn't have played in a church and wore what I was wearin'! He had short hair, no make-up or nothin'. He had both of his eyes, he didn't have the one eye until later on. But he was a very good piano player, him and James Booker both.

AC: Where did "Wop-bop-a-loo-bop-a-lom-bam-boom" come from?

LR: Well, that's what I was doing all those years in New Orleans. Bumps Blackwell had me come in the studio. It was like a turnback on the drums, y'know [scatting], "Woombobbaloomlabompabomalomlumbobam." He said "Man!" I thought he wasn't gonna like it, I thought, "I done messed up," but they liked it, thank God.

AC: I love seeing you in The Girl Can't Help It.

LR: Well, it was the first movie I'd done. It was new to me and my band. They wanted me to be in it by myself, and I demanded that my band be in it too. It was really meant for Fats Domino. They had given it to him, but he canceled, so they gave it to me and asked me if I'd record the theme song.

AC: What a classic movie with you, Gene Vincent, Eddie Cochran, the Treniers, Jayne Mansfield.

LR: Yeah, Gene was a good friend of mine. I played in Australia with Eddie Cochran before he passed on. It was a big hit back in that time.

AC: What was it like when you first started hitting it big in the Fifties?

LR: Well, I was happy for my mom and my family. They had 12 kids, and I was able to return something even though we didn't get what we were supposed to get. We was cheated out of millions upon millions, but that's all in God's hands. We don't hold that, we give it to God and he will take care of that. You got to learn how to give it to God, because vengeance belongs to him. I trust him. I've believed in him all these years. I'm 71 years old, and he's still with me, thank God!

AC: I think back on your image in the Fifties and how outrageous it was for the time and hard it would be for anyone to top that now. What's around right now that you really like?

LR: I like all kinds of stuff. I like country music, jazz, rock, classical, opera, gospel, country gospel, rap, and hip-hop. Rap is an art form. People don't want to accept that, but those people are rhyming in melody and it's hard. I've tried! It's hard!

AC: What about OutKast?

AC: They kind of split the difference between hip-hop and pop.

LR: Well, they've got such a sense of humor about it, and they're from my home state of Georgia. There's so much good stuff coming from there right now. I'm also really looking forward to coming to Austin this year.

Little Richard's keynote address is Thursday, March 18, 10:30am, at the Austin Convention Center. His SXSW showcase is later that night at the Austin Music Hall, 11pm.