It's the time of Rod Argent & Colin Blunstone 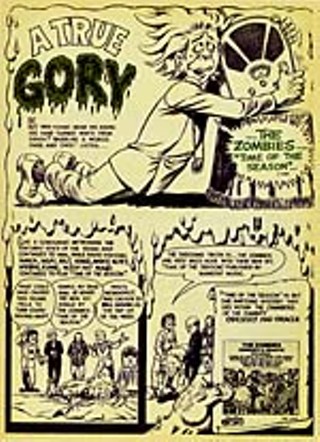 Of the innumerable scriptures that compose the rock & roll bible, Zombie Heaven is one of the most prophetic and divine. British invasion goth pop that left its minor-key mark on all subsequent waves of progressive, psychedelic, and UK mope, with "She's Not There," "Tell Her No," and "Time of the Season," the Zombies also plagued the U.S., a multigenerational swath spanning Elvis to The Simpsons.

"Because we finished the band feeling that we'd been unsuccessful," explains the singer from his home in England. "And now we see that perhaps we were more successful than we realized – that we can go out and play these songs now and give people pleasure."

A 4-CD import found on most domestic record store shelves, 1997's Zombie Heaven is the gospel according to five St. Albans schoolboys who, beginning in 1964, released two albums and a myriad of haunting singles before breaking up three years later. Odessey and Oracle was the band's Abbey Road, a swan song, their goodbye, and today compares to the Kinks' Something Else as a pinnacle of the era.

Zombie Heaven collects all the A- and B-sides; 1965's debut, Begin Here; '67's Odessey and Oracle; the group's BBC appearances; and enough rare and unreleased material to qualify as a national treasure. In short, everything. Even the exhaustive liner notes are a marvel. "Extraordinary" indeed.

"Because it was so unlikely!" exclaims Argent in his earnest English accent. "It was so much not what we were expecting. When we put those records out, records had a six months', year's life, and you didn't think beyond that.

"The thing about Elvis I only found out when the Zombie Heaven box set came out and I was doing an interview with an Irish deejay. He was an Elvis fanatic and told me that Elvis had had our records on his jukebox. That was one of the few times that rendered me speechless. I just didn't know what to say."

After Odessey and Oracle, Argent and Zombies bassist and other principal popsmith Chris White formed Argent, the musical equivalent of the Yardbirds morphing into Led Zeppelin. Blunstone, meanwhile, embarked on a solo career, 1971's showy One Year the most notable of a short string of LPs (the best of which was gathered on Some Years: It's the Time of Colin Blunstone) that ended when the singer retired from the road around mid-decade.

Argent's Midas touch carried over into scoring English television and producing UK million-sellers (Tanita Tikaram), and since White had been a songwriting member of Argent only, and with Zombies guitarist Paul Atkinson and drummer Hugh Grundy having retired with the act, by the Nineties none of the original band was still performing.

Actually, Blunstone had just begun touring again when he found himself in the audience of a charity event featuring special musical guest Rod Argent. A half-dozen live gigs together turned into a Page-Plant-type reunion that resulted in 2001's ballad-heavy synth stopgap, Out of the Shadows (previously written Argent tunes), which led to a handful of American dates in 2001.

A bootleg of one of those NYC dates reveals Blunstone's spooky tenor matured into plumper tones, new material like "Mystified" sharing the set list with Argent's "Liar" and "God Gave Rock & Roll to You," plus forgotten Zombies singles like "Indication," and spot-on Heavenlies "Care of Cell 44" and "Tell Her No."

A just-completed Blunstone-Argent collaboration, As Far as I Can See, is the reason for the duo's first (and only) Austin date since May 6, 1965, and it's on the subject of songwriting, which made Argent his fortune, that the keyboardist tenderizes the Zombies saga in one long, meaty exhale.

"'She's Not There' was the second or third song I ever wrote. And when you're that age, you've got absolutely no experience of anything. You've got a bit of flair; you feel like you can do something. At the same time, you don't have any of the failures behind you, so you just think, 'Yeeaahh! I can do anything!'

"'Cause our producer said, 'Look, write some songs for the session' – the first recording session. I thought, 'Yeah, I can do that.' I was knocked out by the Beatles, who'd been around for a while in England, and I thought, 'I can do something that's just as good, yeah!'

"I thought, 'I'll record it, Colin will sound great singing it, we'll put some good harmonies in there, the record will sound great, and it'll come out and be a big hit everywhere.'

"But you only get that once – you only get that at the beginning. You have that naivete of youth, of being 18 years old, and just thinking you can do anything, because you've got no experience of anything else. And then of course, soon, something comes along to trip you up and show you how things really are.

"'Time of the Season' was written right at the end of Odessey and Oracle, and by that time, I'd had the experience of a lot of things that weren't successful. We had quite a few successes around the world, but we didn't often know about those. Obviously 'She's Not There' and 'Tell Her No' were big hits in America, and obviously 'Time of the Season' was a big hit in America.

"In between, most of the other stuff wasn't. And it was much, much later – because the world is a much smaller place now – we found out that at any one time we'd have a hit in Australia or the Philippines or Europe somewhere. We didn't know about these things when they were happening, so our perception was that there wasn't an awful lot going on for some of the three years, four years that we were together professionally.

"So, yeah, 'Time of the Season' was written very quickly. I remember playing it to Chris, because at the time I shared a flat with Chris and another guy, and I remember saying, 'I think this could be a hit, I really do.' I felt that. And Colin didn't feel it. I remember we went into the studio and recorded it. We had one rehearsal, went in there and recorded it, and Colin didn't see it as a hit at all – at the time.

"But I did have a feeling about that song, I have to say."

It was, in fact, the group's biggest hit, selling 2 million copies almost a year after the group had disbanded.

"No, I didn't like it," chuckles Blunstone. "I hadn't had a lot of time to rehearse, and we had a big argument because I wasn't getting the phrasing quite right.

"I said to Rod, 'Look, if you know the song, why don't you sing it?' Rod said, 'You're the singer, you sing it.' It was something like that ... but the language was more colorful."

Austin Chronicle: You state in the liner notes to Zombie Heaven that Odessey and Oracle should've been a new beginning. Why wasn't it?

Colin Blunstone: How I remember it was that the band was still together at the end of the album, and although we got critical acclaim for it, it didn't sell in the quantities that either we or the record company hoped for. None of the singles charted. It just seemed as though the band had come to the end of its creative cycle; there were no arguments or animosity or anything like that. It just seemed a very natural conclusion.

AC: How come Chris White wasn't involved in the reunion?

CB: Funny enough, he did play us a song, and we did talk about doing it. It just didn't quite happen. This has all come together in a very casual way. We haven't sat down and thought, 'Maybe we should talk to Chris or maybe we should talk to [Argent's] Russ Ballard.' For the future, I think that's a good idea. I wouldn't mind pitching in a couple of tunes myself.

AC: To what do you ascribe the Zombies' enduring appeal?

CB: Well, if I had to give a short answer, I would say I don't know. One reason is, I think we had these unique, prolific writers in the band, and we were fortunate they had such a great body of work. Maybe the other thing is that there's a bit of a mystique about the Zombies in that they did appear to quit when they were at the top. In fact, we felt we quit when we were at the bottom. [Laughs] More than that, I don't understand it. I mean, I'm eternally grateful that it's worked out this way, but I don't understand it at all.

The Zombies, Rod Argent, Colin Blunstone, Zombie Heaven, Odessey and Oracle, She's Not There, Tell Her No, Time of the Season