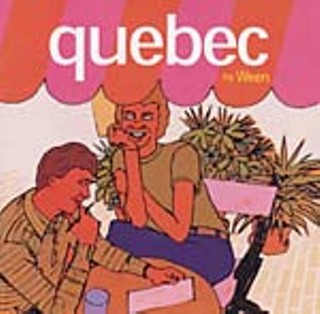 Quebec (Sanctuary) Ween's first studio album in three years reaffirms the iconoclastic duo's ability to be novel without succumbing to novelty. Although Dean and Gene Ween's lyrical bent is, um, unique, they never let it become a disservice to the greater song. Moreover, Ween's solid, history-informed chops enable the band to hopscotch across pop genres effortlessly. "It's Gonna Be a Long Night" starts Quebec off with a Motörhead-channeling kick in the cajones. "Zoloft" then swings the mood abruptly with a Muzak-style jingle you might enjoy next time you're trapped in an elevator. "Transdermal Celebration" packs an arena-sized prog-rock pedigree and psychedelicized lyrics about falling crustaceans leaving trails of flames in their wake. In the right hands, it could become the first laser light show anthem of the 21st century. If the Residents teamed up with Al Jolson, we might get something like the toe-tapping "Hey There Fancypants." "Captain" is a faraway dirge that repeats the sole lyric ("Captain, turn around and take me home") until it's deeply embedded in the listener's subconscious. Those with only a passing familiarity with Ween wouldn't expect them to pull off a forlorn romantic pop ballad like "I Don't Want It," but they nail it while throwing in a screeching guitar solo at the end as an exclamation point. Having played together since eighth grade, Dean and Gene had years to formulate the grand creative vision on Quebec. One can only imagine what they might do on a Rolling Stones-sized recording budget. (Sunday, 6:30pm, Capital Metro stage)