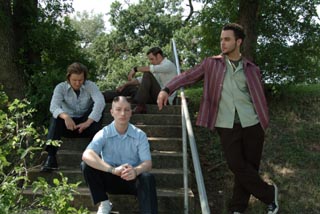 One day in the middle of 2001, a few dozen miles from the Alamo, a Texan drew a line in the dirt and asked his comrades who would be joining him on the other side. Rather than fight for independence, they were forced into it.

"Justin's like, 'Who's with us?'" remembers guitar-slinger CB Hudson.

"We put our hands together and said, 'Let's do this,'" recalls Justin Furstenfeld.

And so it came to pass: Blue October had been dropped by its label, Universal Records. The band's chief songwriter and lead singer, Furstenfeld was determined to end the day with a stronger band.

"I was like, 'Yeah, I'm in,'" recalls Hudson. "If we have a major label deal, that's pretty nice, but [getting dropped is] not going to stop us from doing what we want to do."

Having the biggest of the five major labels lay them off was light years away from the heights the band had reached as the pinnacle of Houston's small but powerful college rock scene in the late Nineties. Unlike some neighbors in the nation's fourth largest city, they didn't have Beyoncé-sized success.

Instead, their 2000 Universal debut, Consent to Treatment, hardly cracked national media. Like many Austin bands -- i.e. Goudie, Vallejo, Dynamite Hack -- who got their taste of major label dreams at the dawn of the new millennium, the San Marcos-based quintet were quick to suffer the corporate bottom line when the album didn't blow off the shelves.

"We were a band called Blue October, and there were a lot of bands called Limp Bizkit and Korn who were really popular at the time," says Furstenfeld, summing up 2001. "We're just not like them."

The singles from Consent never took off, and while the band found itself beloved by a core group of college-aged Texans, there weren't 500,000 of them (gold-record status), which is the neighborhood in which major labels like their band sales to reside in the 21st century.

"At the time that Universal released Consent, it was wrong timing for the world," offers Furstenfeld. "It was the right timing for myself, for people who loved it. For it to catch on, though, it was a bad business move."

"I didn't know what the hell was going on. I thought everybody was going to take care of everything for me. I would not take interviews seriously," he adds, seriously. "I thought I was being mysterious, when meanwhile, I wasn't doing good business. 'Oh, they can't get ahold of me -- that means I'm a cool artist.'

"Hell, no," he grimaces. "That means you're lazy and irresponsible."

Rather than disband Blue October, Furstenfeld took a cue of sorts from Wilco and Jimmy Eat World: make an album the majors can't refuse. Furstenfeld asked those close to him to stay away for a few months, and when he returned, he had the band's third album, the dynamic History for Sale (austinchronicle.com/issues/dispatch/ 2003-07-18/music_phases4.html). Running the gamut from new songs to some of the first he ever wrote, the new album was a step down in budget, but a leap forward in creativity.

"For Consent to Treatment, we went into these big, badass studios where you walk in and there's a big platter with bagels," recalls the band's drummer, Jeremy Furstenfeld, Justin's brother. "It was quite an experience." 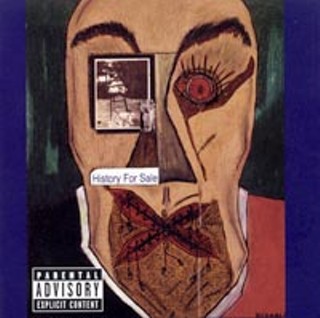 History, on the other hand, was primarily recorded in a strip mall, squeezed between the band's demanding tour schedule and the occasional day job. What emerged is typical Blue October fare: Bright Eyes angst crying onto poppy musicianship Dave Matthews would be proud to call his own. Justin Furstenfeld's romantic and mental battles take center stage in the guise of suicide attempts, child abuse, and getting the girl. It could have been the singer's solo debut if he didn't make it so easy for his bandmates to lend a hand.

"[Justin] makes the frame, sketches the picture, and we come and fill in our own colors," says Ryan Delahoussaye, the band's violinist.

The tapestry of the recordings is only a tease for the band's intense live show. With packed rooms all over Texas, Blue October would probably be winning new fans if the venues weren't already at capacity with old ones. At a 101X show earlier this month in Austin, the band was the clear crowd favorite. Hundreds fought a rainstorm to watch them play the outdoor stage at Stubb's, then exited after the band's set (they weren't the headliners).

One middle-aged fan drove all the way from South Padre Island to spend over $70 on band merchandise. It's this kind of loyalty Blue October had begun to rely on when major labels began beckoning again this past spring. With History having already made its bow in April through Dallas-based indie Brando Records, the group was skeptical. Once bitten ...

"We have a fan base now where we could've stayed indie and maxed-out at about 16,000 records," explains Jeremy Furstenfeld. "[But] there's just no way our little group here can get out to millions. I want to raise my kids and send them to college."

With label presidents tired of braving tiny San Marcos clubs to get a glimpse at this ever-growing phenomenon, Blue October packed their bags in early 2003 for showcases in New York. Over a series of performances, the band relived the days when they were first scouted by the majors. This time, they saw some familiar faces. Lots of them sometimes.

"Universal had, like, 50 people there, and after we were done, they stood up and gave us a standing ovation," recalls the singer.

"Doug Morris, the CEO of [Universal Records], was there and we made him sit through 12 songs," grins Jeremy Furstenfeld. "Then, we played 'Somebody.'"

"Somebody," from the new album, chronicles the hoops an artist has to jump through to be a part of the commercial music business; "I only wanted to be somebody," goes the refrain. The song sealed the deal -- that, a dinner, and a new contract. This is how History for Sale came to be re-released nationally through Universal Aug. 5. The label also came to the table with tour support, while also taking "Calling You" and inviting it to American Wedding, the hit summer movie, and its soundtrack.

Despite the rarity of a band getting re-signed to the label that dropped it, can Blue October be certain Justin Furstenfeld won't be drawing another line in the dirt come the middle of next year? Hard to say.

"The first time, I don't think I ever met anybody from Universal, except the local A&R reps," says Delahoussaye. "Getting with them now, they open their arms. I really feel like we're part of a team now."

The group's leader feels like their record label doesn't just have them, they get them.

"[Universal is] in New York, and I'm in Texas," he states. "The only way they know who I am is through this music that I've made, and that just means so much to me that they actually took the time to care ... again."

No one, especially not the band members themselves, wants to set high expectations, even though it's clear History for Sale is hitting the mainstream at a time when Blue October's sound is being embraced. The music is earnest without whining. It has more substance than most modern rock today and shakes your speakers much harder than comparable acts such as Dashboard Confessional.

"Everybody would love to sell a million albums, but we can't focus on that," acknowledges Justin Furstenfeld. "We've already had people tell us, 'You guys are gonna be huge!' and it didn't happen. It completely demolishes your confidence.

"We built our confidence back up and nobody is going to tear that down again."