50 Cent brings his bullet proof vest to the Delco Center 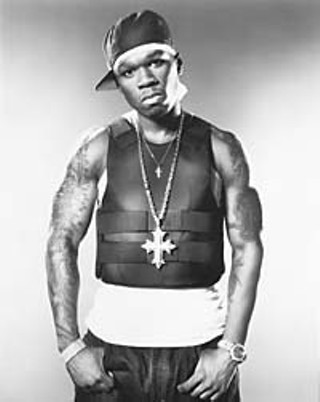 Gangstas and wankstas alike from as far away as Luling and Llano will be flocking to the Delco Center tonight (Thursday) for the Austin debut of chart-topping, gun-crazy, Queens-born rapper 50 Cent. Originally scheduled for the Eastside's Millennium Entertainment Center, this local stop of the "Street Ballas" tour was moved to the roomier, newly opened facility at Highway 183 and Springdale Road in far northeast Austin after it became clear 50 Cent has quite a few fans in the 512. Eminem's Shady Records signee and labelmate will be joined by any number of hustlas from our neighbor to the east: Da Last Don himself, Master P, plus the 504 Boyz, Choppa, and the entire New No Limit Family except Lil' Romeo, who had a world history test he couldn't reschedule. Although, as of Monday afternoon, only 1,000 tickets had been sold for the 6,000-capacity hall, the show has been promoted round-the-clock by Beat 104.3FM and is still a likely sellout. "A lot of people have been calling up and asking," a Star Tickets representative said. "I imagine they're just trying to scrape up the money for tickets." (Hint: Rent porn three nights a week instead of five.) All general admission tickets are $40 for the floor and $30 for the bleachers. Expect heavy walk-up at the box office, don't come strapped, but allow at least an hour for the security search anyway. And remember, at least 500 people will be on the guest list. Showtime is 8:30pm, and rumors of an afterparty at Club Kaos on Riverside Drive have also circulated.

Celebrate Texas Independence Day without leaving your living room when CMT's Stars Over Texas premieres Monday at 7pm. Taped last fall at Austin's Riverbend Centre (which welcomes Julio Iglesias on Wednesday), the program features host Ray Benson singing, telling jokes, and bantering with guests including Vince Gill, Dolly Parton, and cowboy poet Stephanie Davis. When not swapping double entendres with Parton on "Leave That Cowboy Alone," Benson also leads the house band, featuring guitarist Redd Volkaert and most of Asleep at the Wheel, in a horse trailer's worth of authentic Western swing, including well-chosen theme song "Miles and Miles of Texas." Elsewhere, Austin songwriter supreme Bruce Robison invents a song virtually on the spot using cues from a sheepish audience member (likes: Mexican food, her five dogs; dislikes: her cheating ex-fiancé). While some may cringe at the "surprise" walk-on by Gill's baby daughter during "Corrina, Corrina," the music more than makes up for it, especially when newcomer Haydn Vitera, a fiddler/singer from El Campo, nearly walks off with the whole show on a rousing "Drinking My Baby Goodbye." Also, the large bull onstage seems to be there for no other reason than to remind the audience they are, in fact, in Texas, which is only necessary during Parton and Gill's weepy "I Will Always Love You." As far as future stars over Texas, CMT publicist Dixie Weathersby said current plans are to air the show as a one-time-only special, and "we're not sure what will happen after that."

Despite the ongoing rash of club closures around town, it appears the number of venues hosting SXSW showcases is actually up slightly over recent years. Music Festival band czar Brent Grulke puts the 2003 total at 53, including the outdoor stage at Auditorium Shores. This marks the first Festival for nearly one-fourth of the rooms, including Cedar Street, Club DeVille, the Filling Station, and the Lava Lounge, but Grulke says several of the other new venues have hosted SXSW shows before under different names and/or owners. The Fox and Hound has moved into the former Waterloo Brewing Company site, Friends on Sixth Street is where Babes used to be, and the generically named Venue was once known as Empire. For venues new and old, Grulke says the main criterion is that they be places that "have live music at least sometimes, or have had it in the past." Other cases, such as the shuttered Ocean's 11, which has been undergoing "remodeling" for several months now, require more of a leap of faith. Grulke insists, however, that the Festival is "confident the owner will have it up and running" in time for the conference, which is less than two weeks away. "In the past, we've had to find venues literally overnight." Due to the recent nightclub tragedies in Chicago and Rhode Island, safety is on many people's minds this year, especially those in charge. Grulke says SXSW has an excellent rapport with the Austin Fire Department, and the club owners themselves have been equally conscientious. "Obviously, it's in everyone's vital interest to ensure the shows are safe," he says, adding, "this heightened sense of awareness will guarantee an even greater degree of safety than in the past." 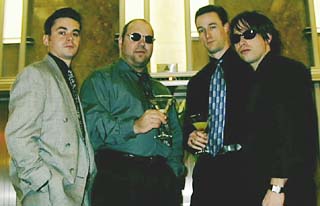 TCB: What do the Yuppie Pricks say to people who might call them sellouts?

TCB: Are the Yuppie Pricks a political band?

Middleton: I wouldn't say that any of us care about politics unless they're politics that are going to make us more money or more famous.

Hetherington: If the rest of the world were more like us, then the world would be a better place.

TCB: Who are the Yuppie Pricks' role models?

Hetherington: You mean other than ourselves?

Hollingsworth: I would say my father and my grandfather. They're both divorce lawyers, they never lost a dime to a bitch, and it was just get paid and get laid.

Bruce Springsteen & the E Street Band's makeup date at the Frank Erwin Center is Sunday. A pair of local ladies sound off on their best-loved Boss tunes:

Patty Griffin, "Backstreets": "[He's] saying stuff here no one has ever said outside of really great novels: 'Blame it on the lies that killed us, blame it on the truth that ran us down, you can blame it all on me, Terri, it don't matter to me now. ...' Bridges don't get better than that." (Uncut magazine, April 2003)

Floramay Holliday, Sis Deville, "Thunder Road": "It was a tune I would listen to over and over in high school. I went to an all-girl boarding school where I learned to play guitar. My English teacher was a big Springsteen fan, and we would talk about the poetry and images of his lyrics. It's also one of my favorite songs to rock out to when I'm driving by myself!"